Joyce Grable to be honoured by CAC 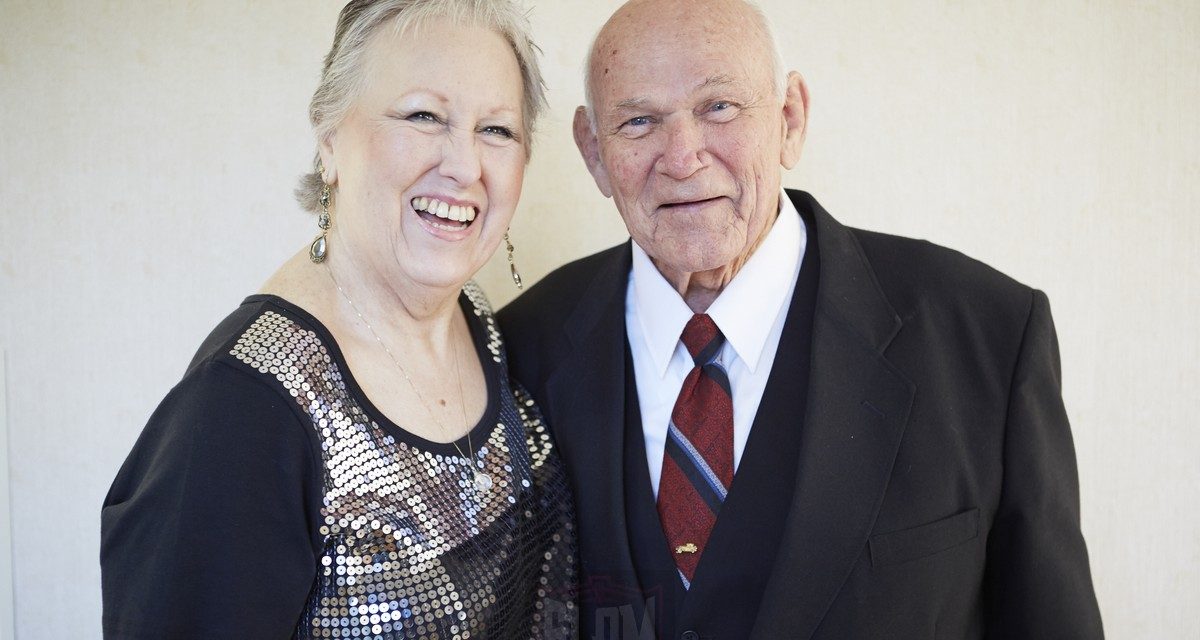 Las Vegas has always been known as America’s playground. But to wrestling fans, it is also recognized as the home of the Cauliflower Alley Club. Since 1965, this non-profit corporation has been in place to celebrate the accomplishments of pro wrestling’s elite. And one of this year’s honourees is a woman that opened many doors for a lot of female wrestlers today, so it’s only fitting that the CAC opens its doors for Joyce Grable. 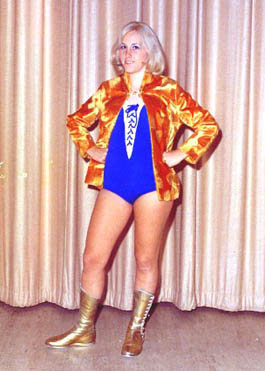 Grable will be the recipient of the women’s wrestling award when the CAC reunion returns to Vegas on April 19. Grable has attended the reunion in the past and witnessed many of her peers receive that award, and she is absolutely thrilled that this year is her turn.

“I’m very excited about this,” Grable told SLAM! Wrestling. “I’m so happy that they’re giving it to me this year. It’s like one more step up the ladder.”

Grable says the significance of this awards ceremony as opposed to others is that no one person picks and chooses who gets into the club. Each award recipient is nominated by someone and then the final decision is made based on the votes of their peers.

“Everybody votes on this,” she said. “It’s very exciting because all these people who have been in the business get to decide who to vote for. I’m very happy that my name came up.”

A native of LaGrange, Georgia, Grable got her start in the wrestling business in 1971, learning from the late Lillian Ellison, a.k.a. The Fabulous Moolah.

“I went to Atlanta with another girl to the wrestling,” Grable said. “She wanted to talk to Moolah about training after the match. Moolah said, ‘What about the blond next to you? I will train you if you bring her too.’ I went and made it and the other girl didn’t.”

Like Moolah, Grable was tough enough not to be intimidated by the fact that pro wrestling was a male-dominated sport at the time. In fact, she had no problem stepping in the ring with the boys and showing them who’s boss, which Jacques Rougeau Jr. can personally attest to. In 1980, Grable was involved in a tag team match at Atlanta’s Omni, with Rougeau — working as Jerry Roberts — on the opposite side. Rougeau apparently didn’t think girls belonged in the business and tried to manhandle Grable, until she eventually got fed up and knocked the wind out of his sails. 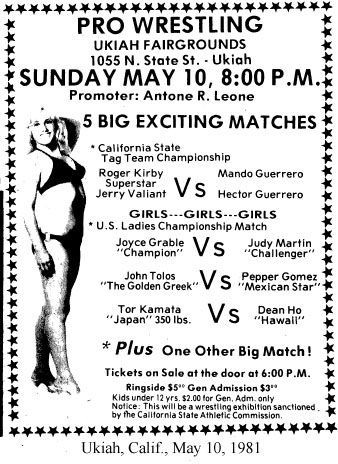 A 1999 LadySports magazine profile on “The Golden Goddess of the Mat” described her style: “She perfected a flying body block off the turnbuckle that usually set up a pinfall, a great flying head scissors, and a deadly victory roll. Her dropkicks were known for putting the other wrestler down for the traditional boxing ten-count rather than just the three-count needed in wrestling. She could also make her rivals scream uncle with holds such as the figure-four leglock and the Boston crab.”

Throughout her career, Grable captured the NWA Women’s Tag Team Championships on four occasions (twice with Vicki Williams and twice with Wendi Richter). She’s also held the NWA Women’s U.S. Title once. Grable has not only had success inside the ring, but outside as well, as she later excelled as a manager and also helped train future women’s wrestlers, such as former Glamour Girl and WWE Women’s tag team champion Judy Martin and former WWE Women’s champion Richter, who was just inducted into the WWE Hall of Fame.

Her last match was in 1991, having put in 13 years full-time, and seven on a part-time basis near her Georgia home. Back surgery followed her retirement; other injuries over the years included a broken collarbone, a dislocated right shoulder, a cracked vertebrae in the neck, and pinched nerve caused by a slipped disc. She had one son, and helped raise two daughters from her second husband’s marriage. She currently works as a receptionist a couple of days a week at a facility for the mentally and physically handicapped.

Grable has been to the CAC reunion before and enjoyed her time there very much. She says she wouldn’t have traded the experience for anything in the world, because she enjoys interacting with her fans. 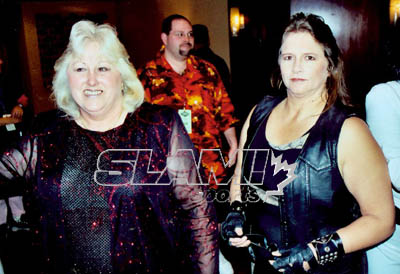 Joyce Grable and Peggy Lee Leather at a CAC event a few years back. Photo by Mike Lano, WReaLano@aol.com

“I’ve met some very nice people, going to the Alley Club reunion,” she said. “It’s two different days. The first day is what they call a Bologna Blowout, which is when they have a feast of all these sandwiches and we all sit there and have dinner together. The second day is the awards banquet, where they have singing and dancing and karaoke and then the awards ceremony. They do a great job every year.”

The CAC always brings back so many fond memories for Grable. But one of her favourite pastimes is having the chance to get to know her fans. She loved her time as a wrestler and manager, and she is very grateful to her fans for making her dreams possible.

“I love whenever the CAC has a reunion, because the event is open to the public. You get to see a lot of your friends and peers and also talk to some of your fans,” she said. “I’ve met a lot of good fans and I really love it. There was this one fan that showed me a picture one year that he had taken of me and The Grand Wizard, where I was dressed in a Playboy bunny outfit. I had forgotten about things like that and it’s pushed way in the back of my head, until I see it again. I really enjoy talking to them (fans).”

Grable is very much looking forward to attending the CAC reunion another year, only this time, she’s not a bystander; she’s an honoree.

The CAC celebrates its 45th anniversary from April 19-21 at the Gold Coast Hotel and Casino in Las Vegas, NV.