12 Rounds is a very solid film. There are no big plot-holes, no actor miscast, and it moves at a steady pace right up to the end. It is a strange thing to negatively criticize a film for being too sturdy, but that’s how 12 Rounds felt: too neatly packaged, like a Hallmark action movie.

The DVD and Blue-Ray release of the film advertises an “Extreme Cut,” but it’s only extreme in the same way that the WWE’s version of ECW was extreme. In a commentary for the film, Cena (speaking alongside writer Daniel Kunka), speaks of how it was right up the alley for WWE Studios as a PG-13 film from the very beginning, so don’t go in expecting much differences between the theatrical and unrated versions. 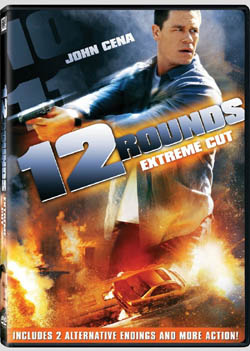 For those that take John Cena to task for his limited performance range, that’s neither the point nor the problem as it concerns 12 Rounds. In The Marine, Cena was entrusted to carry a lot more of the film than he is this time around. It doesn’t feel as much like a Cena-vehicle as The Marine, and, instead, is a Hollywood film in which Cena happens to have a role. “Hollywood” isn’t meant as a necessarily negative descriptor here — the film is slick and tells a better story than any other WWE-produced film made thus far.

That being said, it’s not as much fun as The Marine. The plot riffs heavily off of Die Hard with a Vengeance (the third film in the series), which is perhaps only slightly coincidental considering that Renny Harlin had the directing duties, as he had with Die Hard 2: Die Harder, and it was produced by a team that includes Mark Gordon, who also worked on the producing team for Speed (which is often lovingly described as Die Hard on a Bus).

That really is the only knock against 12 Rounds: if you’ve seen at least a couple of those movies listed above then you aren’t going to get anything new out of this film. In the opening scene, you’ll find what is probably the most intriguing sequence as the FBI hunts slippery Irish terrorist Miles Jackson (Aidan Gillen) through the crowded streets of New Orleans.

It’s interesting to watch how the agents placed throughout the streets use cell phones and foot power to try and trap their target, and we’re introduced to Agent Aiken (Steve Harris, probably best known for his role in TV’s The Practice) and his obsession with catching Jackson (and an obvious but intriguing insertion of a character trait as Aiken habitually fiddles with a toy car). Kunka reveals during the commentary that he and Harlin had meetings with two FBI agents and ran their story ideas past them for authenticity. So, with only a little exaggerated movie magic, the FBI agents in the film are acting much as they would in real life.

While there will be more characters to come, once Officer Danny Fisher (Cena) unwittingly ambles into the middle of this global chase for Jackson, you have the main trio set. Jackson will kidnap Fisher’s girlfriend as a measure of revenge against Fisher for causing the death of the terrorist’s partner-in-crime and lover (it wasn’t really Fisher’s fault, of course, but the bad guy refuses to listen to reason); Fisher will do whatever he can to save his girl; and Aiken will do whatever he can to catch Jackson.

The thrust of the plot is set around 12 Rounds of high-stakes challenges that Fisher must face to ensure the continued survival of his girlfriend and having at least a chance to save her. The tests are none-too-outrageous, and seem generally beneath the skills of Fisher. Still, he survives challenge after challenge, seemingly no closer to winning than when he started.

Unfortunately for Jackson, playing a game of 12 Rounds instead of, say, 10 Rounds, gives the good guys just enough time to figure out what’s really going on (of course, if they had wanted to know what was going on, they just had to take a quick break and rent Die Hard with a Vengeance).

The extra features on the DVD provide one very impressive sequence showing Cena being trained for stunt driving. He really is behind the wheel for all of the car-based stunt driving sequences in the film, and only took a back seat for the scenes with Fisher rampaging through New Orleans in a fire truck (though Cena was trained on the truck as well).

It’s no big surprise for those that know of Cena’s affinity for muscle cars to see how motivated he was to do the driving himself, but it is something to see just how good he is. Could that really have been him in the Mustang before his WrestleMania 23 match against Shawn Michaels?

Cena was highly unenthusiastic, however, about the wire work required for a scene in which Fisher dangles outside a window for a quick descent. The ground-based wrestler makes no secret of his fear of heights, at least when in an open area like, say, dangling outside of a window. He insisted that this is the last movie in which he’ll do a stunt like that for himself, and will gladly let a stand-in take his place in the future.

As for that future, Cena stated with purposeful insistence that he is not using the WWE as a stepping stone to a film career (hmmm, can you smell to whom The Champ is referring?) but plans on having both careers evolve without interfering with each other.

The extra features really drive home the impression that what Cena is lacking in the certain type of charisma that screams Hollywood star, he makes up for in his congeniality, enthusiasm, and what seems to be a genuine “aw, shucks” kind of gratitude he has for being part of a film in the first place.

All in all, this is the best WWE Studios film yet — sure, the bar is pretty low, but you can’t really ask for more than a step in the right direction such as 12 Rounds provides.