Third generation a big part of Hart and Soul DVD

The promotional bump for the new WWE DVD, Hart and Soul: The Hart Family Anthology, is pretty careful not to just focus on the big names of Bret and Owen Hart. And, unlike perhaps on TV, the Hart Dynasty, made up of third-generation stars David Hart Smith and Natalya Neidhart, are featured prominently on the three-disc set — in the documentary, with a match, and as hosts.

“We actually did help host the DVD. We did some interviews for the DVD. It was a really, really well done DVD,” Natalya recently told SLAM! Wrestling. 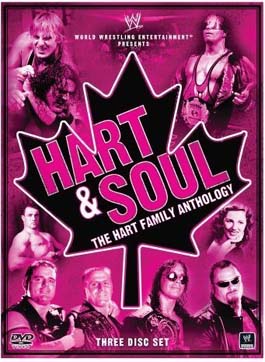 The documentary portion of the DVD stretches details the early days of Stu Hart as a wrestler, and meeting Helen Hart in New York, into the advent of the Stampede Wrestling promotion (then known as Wildcat Wrestling). Later come the army of kids — 12 Harts in all — and the well-known stories of triumph and tragedy.

Well, perhaps not so well known, said Natalya. “Watching it, I actually found out things that I never knew. Watching David and Tyson [Kidd] speak, I discovered things, like, ‘Oh, so this is how they feel about that.’ We had never talked about that before. But you’ll see things like that on the DVD, things that are revealed.”

David Hart Smith concurs with his cousin that it is an excellent DVD.

“It was a great opportunity to be a part of it,” he said. “They had some good matches on there, good stories. I would say — not to be biased or anything — but I would say it’s the best DVD out of all the families and bios that they’ve done on everybody thus far.”

Smith went on to explain that he is a bit of an anal-retentive when it comes to his own footage, and looks forward to perhaps having a DVD of his own one day.