An overdose of pills at his apartment has claimed the life of Chris Kanyon (Chris Klucsaritis), who also wrestled in an elaborate gimmick as Mortis. He was 40 years old.

Klucsaritis was found in his apartment in Queens, NY, on Friday night. His death is believed to be a suicide. He had admitted that he suffered from bipolar disorder and had apparently battled with suicidal thoughts in the past, including an admitted sleeping pill overdose in 2003.

At age six, Klucsaritis was into pro wrestling, and by age 12, the Queens, NY, native had decided he would become a professional wrestler. In college, he studied physical therapy, and he became a well-paid physical therapist. But the lure of wrestling continued, and, in 1992, he gave up the well paying career to work for $40 a night in Memphis. He trained in New York City with Bobby Bold Eagle, and in Columbia, SC, with The Fabulous Moolah (Lillian Ellison). 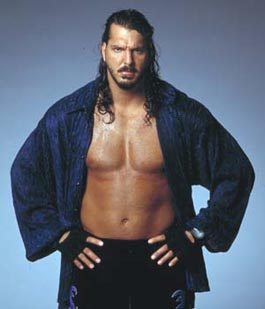 In his early days, he was a tag team wrestler with Mark Starr, known as Men at Work, in World Championship Wrestling.

For most, Klucsaritis first came to everyone’s attention as Mortis in mid-1997, a rough take on characters from the Mortal Kombat video game.

By 1998, Mortis was no more, and Chris Kanyon appeared. Using the catch phrase “Whose Better Then Kanyon?” he was a part of Raven’s flock. His biggest WCW push was working as a part of the Jersey Triad with Diamond Dallas Page and Bam Bam Bigelow. Behind the scenes he helped prepare non-wrestlers like Jay Leno and David Arquette for their matches, as well as being the stunt coordinator for the film Ready To Rumble. He was thrown off the cage used in the film in a match at Slamboree 2000 by Mike Awesome.

Kanyon struggled to find his niche in WCW, having a brief run as Chris “Champagne” Kanyon as well as “Positively” Kanyon, feuding with former partner Page.

When World Wrestling Entertainment bought WCW, Kanyon was brought to the new company as a part of the WCW Invasion angle but never really caught on. Kanyon and DDP were WWF tag team champions for a period in August 2001. He was also handed the United States title by Stephanie McMahon in July 2001, losing it to Tajiri in September.

A torn left anterior cruciate ligament sidelined Kanyon in October 2001, and he was on the shelf until May 2002, when he went to Ohio Valley Wrestling, when he was sidelined again, this time with a shoulder injury. He was briefly on the Smackdown roster in 2003, but never was a headliner. After not being used for a year, he was released in February 2004.

He briefly retired in August 2004 but was back in the ring by summer 2005. He appeared at TNA’s 2005 Turning Point pay per view in a loss to Raven.

At a 2006 Blood, Sweat and Ears show in Ontario, he claimed he was fired from WWE for being homosexual. After initially claiming that the character of Kanyon was gay, he later said that the man behind the character was gay. As one of the few openly gay professional wrestlers, he did several media interviews and had hoped to make a comeback as an openly gay wrestler, a goal that was never realized.

“I knew being in Midtown and meeting so many gay people would be good, and I know it’s going to be a great journey in my personal and professional life,” Klucsarits told Bo Shell of Atlanta’s Southern Voice Magazine in 2006. “My biggest regret is that I never listened and understood the words to the Aerosmith song ‘Amazing’… ‘life is a journey not a destination…’ and the journey is going to be so cool, however long it is, and it’s going to be great.”