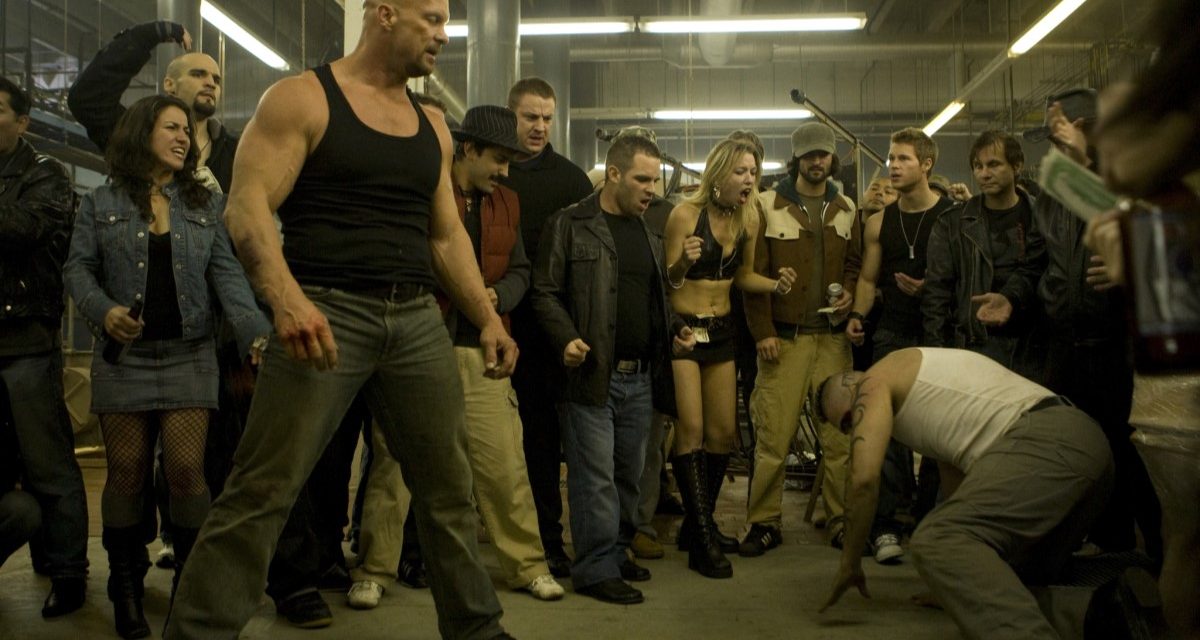 Stone Cold Steve Austin’s second movie as a leading man came out Tuesday on DVD. It’s called Damage, and it might be familiar to you from the countless promos that ran during his guest hosting appearance on Monday Night Raw last week. He hopes it is the start of a long, busy film career.

“It was a ton of fun,” Austin told Slam Wrestling about making Damage. “It was the second movie I’ve made — had some small parts in some other ones, but second movie I made. I had a blast making it. Vancouver is a beautiful place. It was a learning experience. It was a place to start. I’m very proud of the movie. I’m looking forward to making a bunch more.”

Austin stars as John Bricker, an ex-convict who ends up competiting in illegal underground fights after getting paroled. Others in the film include Laura Vandervoort from Smallville, Walton Goggins (The Shield), Lynda Boyd and Eric Keenleyside.

“They surrounded me with some great actors and some wonderful fighters. I just tried to learn as much as I could to carry on to the next project,” he said.

“We were doing a fight scene and the camera was on me, and on Paul’s back. As I swung a left hook, I got it a little too deep. With my pinkie finger, I pushed his nose about two inches across the other side of his face,” recalled Austin. “He just looked at me and said, ‘Keep going.’ So I kept swinging at him. We laughed our tails off afterward. Paul has since doubled me in my last two movies. We had a laugh about it, but I felt horrible about it. Paul is one tough guy.”

On his website, Lazenby didn’t blame Austin at all for the incident, which required a good 20 minutes before the bleeding stopped. “I want to stress that this was NOT a case of negligence or incompetence, just one of those things that can happen even between skilled performers when they’re swinging their fists at one another,” Lazenby wrote. “I don’t blame Steve at all, he just made a mistake that even the best stunt performers can make (and one of which I’m certainly not innocent).”

Though a professional wrestler is used to violence, Austin was upset with the incident. “Paul trusted me with his body and his face. I broke his nose. That’s unacceptable. I apologized profusely.”

There are a lot of elements of Stone Cold Steve Austin in John Bricker. Wrestling fans will see his familiar gait, his cold, brusk delivery and some good fight scenes. It’s the heart of gold that Bricker has that might not seem right.

Austin hopes not to be type cast as a tough guy or an action hero.

Making good movies will depend, in part, on his improving as an actor. He’s trying his best.

“I think that if you watch a great actor’s early work, he’s better after he’s done a bunch of movies than his first movies. Same as pro wrestling; I remember I was very green when I first started, but I turned into a very good professional wrestler — never technically a great wrestler, but one of the greatest wrestlers to ever step in the ring,” he said.

“Same with acting. I just think you can take acting classes, and I think people that do are smart to take them, to get involved with drama, and plays at a very early age. But the route that I’ve taken, through my background in pro wrestling, it’s all on-the-job training for me. I watch and I ask questions to the actors that are on set. I need more and more experience, so I can try to bring up my game and make the characters that I create come to life and be real on screen.”

Damage most definitely had a smaller-name cast compared to his next meaty role in The Expendables, which co-stars Sylvester Stallone, Mickey Rourke, Jet Li, Jason Statham, Dolph Lundgren — even Arnold Schwarzenegger has a cameo. That film is expected to be released in August 2010.

There were different vibes on the sets, he said.

“You can only imagine there would be a lot more egos on the set of The Expendables. A lot of testosterone, a lot of adrenaline, and a lot of explosions and bullets flying around. But it was a fun experience, and I’m looking forward to the movie. What I saw of the movie, when I was doing my voiceovers, looks phenomenal.”