For years, the catchphrase within the wrestling community has been that WrestleMania is the time of year when all members of the WWE roster amp up their game.

After all, to be on the biggest stage of them all, they say, means performing the biggest you can as well. It’s putting a little more into punches, jumping a little higher off the ropes and putting a bit more swagger in your step. 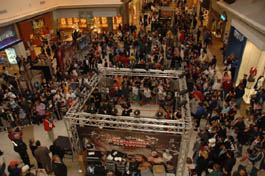 Throngs of people converge on an Axxess event at WrestleMania 23 in Detroit. Photo by Mike Mastrandrea

But is this just an urban legend? Or something cooked up by WWE’s marketing crew? One would think so at first, until you talk to the people who have worked behind the scenes.

Jimmy Noonan is not a name you’d necessarily recognize. He isn’t an in-ring competitor, a broadcaster or a backstage interviewer. Instead, Noonan worked on WWE’s security team, eventually becoming its head. He worked five WrestleManias (18-22) and fondly recalls running to appearances with the likes of Eddie Guerrero, Rey Mysterio and John Cena.

Amping up for Noonan, however, didn’t just mean attaining a new level of excitement — it also meant that his job would increase tenfold. Consider, for example, working at the hotel where the talent stayed. He gives an example where a 1,200-room hotel would be three-quarters booked by the Fed. That’s a heck of an area that you had to protect, especially when you consider how ravenous the public can be.

“Security in the hotel, along with WWE security, would do our best to secure the hotel. So right away the ante was up so to speak. We had top talent come in, guests coming in… we needed some type of secure area where fans couldn’t get to,” he remarks.

Part of this was due to what was going on in the temporary dwelling space, as Noonan reveals.

“In part of the hotel, you had a ring set up where guys are going over their matches all week,” he said.

Because Mania takes place in a different city each year, security methods changed each year as well. Noonan points to WrestleMania 19 at Safeco Field in Seattle as an example. Here, wrestling was new to the stadium staff, which meant that there were concerned people before the show.

“There were questions about the pristine and beautiful grass on the infield all week; were we going to be able to do this, were we going to ruin the joint? They do baseball at Safeco, and now we’re bringing wrestling fans in,” Noonan recalls. “We had a security meeting very early that day, at 2 o’clock, and we met with everybody — the supervisors, the 250 guys manning security gates and working ringside — and my partner came up to me and said, ‘Jimmy, did you feel it? They’re afraid.’ They weren’t ready for wrestling fans.”

“In that essence, every one was different,” Noonan adds. “There was always something.”

So having been through so much and seen so much at the “granddaddy of them all,” is there one “WrestleMania Moment” that stands out above all others for Noonan? It took Jimmy all of five seconds to point out his favourite — the crowning of Batista as champ.

“Dave is still my friend. He’s the only person that I still call a friend in the business today,” he says. “I was already in WWE when this monster, Leviathan, came in, and to watch the progression from this jobber guy, Deacon Batista, to be in the main event of ‘Mania 21 and win, that made me very happy.”