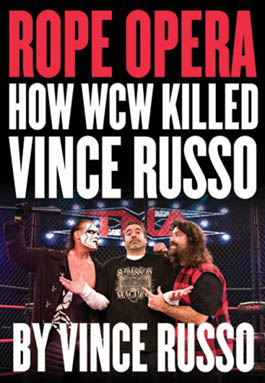 The book is written similar to a journal, which purposely has a tendency to jump to and from different time periods.

Russo explains his reasoning for the design by writing, “If you want to know why this book isn’t written in chronological order, it’s simple: I want you to read the whole thing. That especially goes for you wrestling fans. I refuse to allow you to seek out and read all of the grapplin’ parts and then bury this book next to your VHS tape wrestling collection. Not gonna happen!”

Rope Opera, published by ECW Press, essentially picks up where his previous book Forgiven: One Man’s Journey from Self-Glorification to Sanctification left off in 2006.Chapter 2 aptly entitled “Gone Like a Thief in the Night” details how Russo, along with his two sons VJ and Will, packed up his office late one Friday night at Titan Tower, unknowingly to the powers that be at WWE before making the jump to WCW in October of 1999.

Russo gives his account of the events that transpired in WCW as well as his perspective on other aspects of the wrestling business. There were points I agreed with; however, there were also statements I disagreed with including the following paragraph:

“Booking is a poor attempt at writing by wrestlers who are attempting to be writers. The truth is, to a writer it’s an insult. I’ve been in the wrestling business for 15 years now and I’ve never worked with or seen a professional wrestler who can pass for a writer. Just like I’ve never seen a writer who could pass as a professional wrestler — and yours truly is at the top of that list. You see, when WCW pushed me in a corner I made the decision against my better judgment to get in the ring and become a part of the show. However, after receiving several head injuries I learned my lesson the hard way. What’s the excuse of bookers? How low do the ratings have to go before they hand the pencil over to somebody who knows what to do with it?”

In my opinion, bestselling author and current TNA wrestler Mick Foley singlehandedly debunks that theory. If you dig deeper, you will also realize that Russo’s current writing partner, Ed Ferrara, is a trained wrestler who wrestled on the California independent scene before joining Russo in 1998 at WWE.

On the other hand, Russo is spot on about talent being classified as independent contractors within professional wrestling. He writes, “Independent contractor: that is the biggest joke in the bubble to date … How can business practices be that archaic in 2006? The answer is simple: time has simply passed them by, both inside and outside the ring. And the promoters, owners — call them whatever you want — will continue to get away with it as long as the boys allow them to.”

Furthermore, Rope Opera contains Vinny Ru’s takes on popular topics pertaining to WCW such as David Arquette winning the world title, his tenure working with Eric Bischoff and Bash at the Beach 2000.To me, the more compelling portions of the book revolve around TNA, as there are not that many books about the company presently available.

Russo includes his view of the relationship between Jerry Jarrett and his son Jeff. He is also very critical of the elder Jarrett from both a professional and personal perspective. After reading Jarrett’s The Story of the Development of the NWATNA: A New Concept in Pay-Per-View Programming, I can assure you the feelings are quite mutual.

Speaking of individuals who differ in opinion with Russo, Jim Cornette is also mentioned in the book in a surprisingly favorable manner. According to the text, “No question that the two most creative minds in the history of the business belong to Dutch Mantell and Cornette, and both have wit like none other. I swear to you, if they hadn’t chosen professional wrestling as a career, they both could have been successful stand-up comics.”

Perhaps the most surprising part of the book is the inclusion of Chapter 46 entitled “Jeff and Dixie: Two People, Two Philosophies,” which describes the dichotomy between Jeff Jarrett and Dixie Carter.

The hierarchical landscape within TNA has always been divided and difficult to follow at times. As of writing this, I am not exactly sure who within the company has the most influence on the final product.

Russo adds to this point by writing, “From the moment they began working together, there has always been a difference of business philosophies between Jeff and Dixie. The good news is that it isn’t personal, nor has it ever been. But the bad news is, it still exists to this day, up to this very minute … In my opinion, from where he’s coming from, Jeff believes TNA needs to be run like a wrestling business. On the other hand, because of her experience, Dixie believes TNA should be run like a company. Thus the clash. Since the two came together, they have never been on the same page; it’s usually Dixie, and not Jeff, who says they are, but anyone who works at TNA will tell you … well, let’s say that’s not completely accurate.”At times it gets really difficult to choose sides. Unfortunately, many in the company are often forced to do just this.”

Other parts that stick out are the passages about Jeff’s late wife Jill’s battles with cancer and Russo relocating his family to Colorado along with the acclimatization issues that follow.

The final entry is dated November 5, 2009, which discusses working with Bischoff in TNA up until that point, which causes one to wonder if the two will be able to continue their working relationship.

Overall, I recommend Rope Opera: How WCW Killed Vince Russo to individuals who are curious about the behind the scenes occurrences of a wrestling company, specifically TNA.

Moreover, the 255-page book depicts Vince Russo’s account of his professional life in wrestling and personal life as a Christian. If anything, it gives readers a unique portrayal of Vince Russo as a person as opposed to Vince Russo the character.