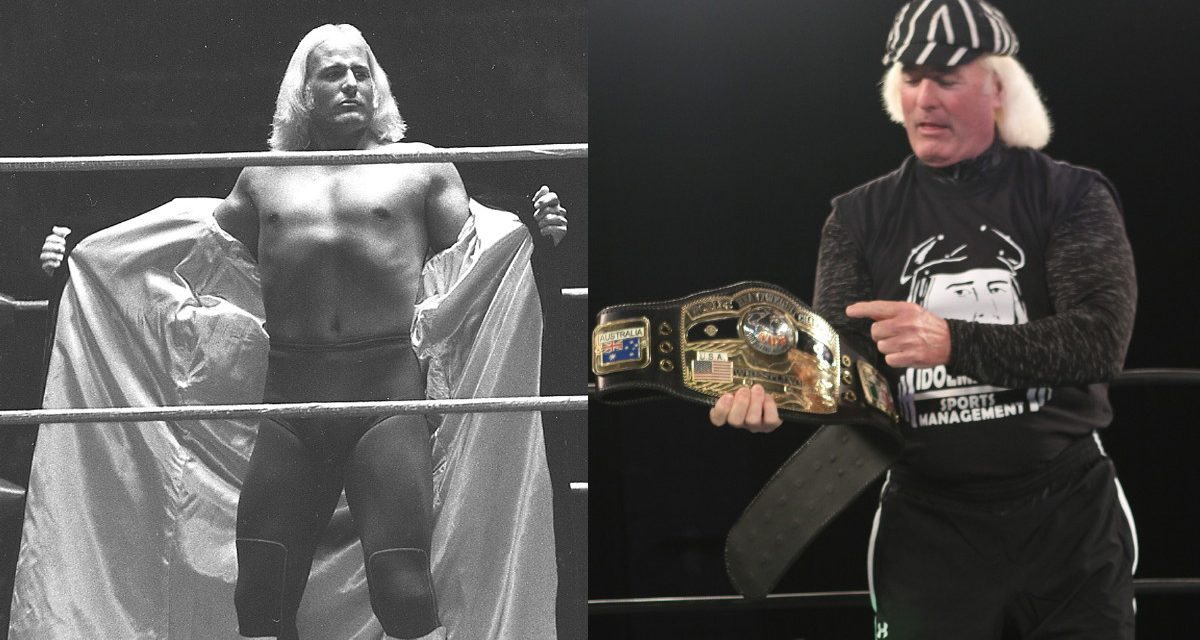 When the Cessna 182-J slammed into the cold, dark and murky waters of Tampa Bay, I was certain that the “Jaws of Death” would have their way with me. I knew that I only had seconds to save myself from drowning. Desperate to survive, I held my breath as the remains of the twisted fuselage contined to sink on the sandy bottom of Tampa Bay with one body trapped in it forever. This was my live or die moment and I chose to live!
-Excerpt from the yet-unfinished Austin Idol autobiography

Austin Idol was a major wrestling star in the late 1970s and throughout the 1980s. He regularly shared space on newsstand magazine covers with all the top names of the day from Andre the Giant to Harley Race, Ric Flair, Bob Backlund, Nick Bockwinkel, Mil Mascaras and more. He took Jerry Lawler’s hair in one of the great cage match angles of all time involving Tommy Rich. But just like a magician at the end of his set — poof! — and The Universal Heartthrob was gone.

After Hiro Matsuda literally broke him in — “plus a lot of bones along the way,” he said with a laugh to SLAM! Wrestling, Idol spent the early part of the ’70s learning his craft primarily in WWWF as “Iron” Mike McCord, where he was on the losing end much of the time. 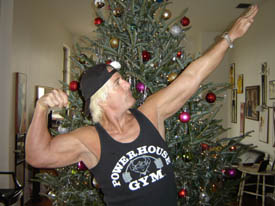 POSING AROUND THE CHRISTMAS TREE … Austin Idol strikes a pose in late 2009.

“Later, when Mr. McMahon Sr. finally paired me with Lou Albano and told me I was getting a push, I was ecstatic,” he recalled. “I had a lot of great memories there plus in Florida and Charlotte too.”

McCord wrestled all over, including Australia and Japan, where he was tag team champion with Stan Hansen.

Then came the plane crash that changed his life.

It was February 1975. He survived the flight, piloted by wrestler Buddy Colt (Ron Reed), which crashed in Hillsborough Bay near Tampa, Florida. Manager Gary Hart survived, as did Colt; Bobby Shane (Robert Schoenberger) did not. In October of that same year, tragedy struck again with a plane crash in North Carolina that killed the pilot, ended the wrestling careers of Johnny Valentine and Bob Bruggers, sidelined Flair with a broken back, and hurt David Crockett and Tim “Mr. Wrestling” Woods.

Idol made it back a different person.

“After my own rehab and a lot of will power, I decided to give wrestling one more big shot and really develop my character,” he said. “The crash also matured me. I definitely looked at life as the precious thing and got my priorities where they needed to be. Family. Friends. I had to turn it into a positive since I survived an event no one should ever go through.”

The character of the bragging and wild “Universal Hearththrob” was slowly crafted “with care and thought.”

“I’d lost a hundred pounds after the plane crash but before I decided to return to the ring. But if I was returning, I wanted to be a far more colorful heel than I’d been. For the new name I wanted something that was different, easy to remember plus be a name that would become a strong brand. Back then, the name ‘Austin’ was nonexistent in wrestling and ‘Idol’ was too good not to use. I knew even then I’d have loads of options like ‘The Idol,’ ‘Idol-Mania,’ etcetera. [Hulk] Hogan will admit that he stole ‘Idolmania’ and converted it to ‘Hulkamania.’ I’m glad for him and that he did so well with it.” 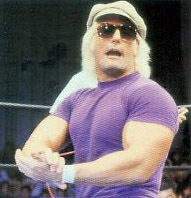 Striking a colorful pose in 1981. Photo by Mike Lano, WReaLano@aol.com

Wearing colorful caps, jackets, ever-changing boots and tights, he strutted to make an impression. “I tried never wearing the same combination twice. And my vocal skills just developed to another level.” Everywhere he went, fans went nuts and in particular after he turned babyface in Atlanta and on Ted Turner’s WTBS Superstation.

“I just walked away from the business and I never really looked back. It wasn’t because I didn’t love or enjoy it. I did. I loved my friends and all the fans, whether they loved or hated me. But the politics and wear and tear just got to be too much,” he said.

“I know a lot of people wondered if I’d dropped off the planet, but I became really successful with my real estate gig and finally had time for my family. No more wrestling B.S. And if you thought I was a great wrestler, you should’ve seen me doing real-life business!”

Since leaving wrestling, McCord purchased and re-sold over 600 pieces of real estate as sole investor. But it’s in the past. “Real estate now is dead with the mortgage crisis, and will remain that way for years,” Idol explained. “That’s why I’m no longer involved in it. I’d potentially like a new challenge to conquer anyway.”

He’d also been so successful at it that he began lecturing on how he made his millions as well as motivating people to get and stay in shape. Recent Youtube videos show him working out at his favorite major gym. “No one can believe I’m the shape I’m in at my age! So I was asked to make a video to help others get into shape, and stay in shape and good health for life.” 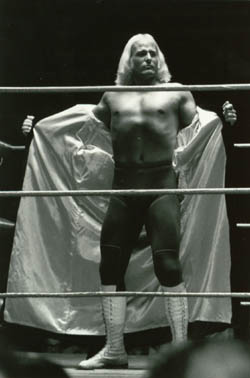 Getting ready for action. Photo by Terry Dart.

His promo skills and desire to help others led to his possibly being drafted to run for Tampa mayor. “It’s my hometown and I moved back to consider running. I haven’t officially filed but I have until March 2010. I just want to make sure this is what my family wants, before putting myself through all that comes with politics. But my platform is simple: ‘Don’t Lie!’ How refreshing for a change.

“We should demand that all our elected officials, no matter where they are or what level, to be honest and tell the truth to their citizens and constituents. They’d have no jobs if people hadn’t trusted them and voted them in in the first place. I think our voters might appreciate someone who tells the truth. They’re not used to that and it would make for a very strong campaign message. Be truthful and do your best for the people. If I do run and it’s leaning that way, that’s what I’d try to do for my hometown. I always felt there was a lot of politics behind-the-scenes in wrestling. Now at least I’m taking on the politics of real life, and head on!”

For being a heartthrob girls shrieked for as if he were one of the Jonas Brothers, fans will be shocked to learn McCord’s been married to the same girl for 38 years. “I have a 28-year-old son I’m so proud of who now is enjoying the single life. And at home, my family and I love animals, but currently are petless. But you never know when the animal bug will hit again! My main hobby is still being a workout freak at Tampa’s Powerhouse Gym. I have to work out a minimum of five days a week at the very least. It’s my passion. I have a new Secrets to Super Health DVD on my austinidollive.com website that teaches people how to be their best too. Please check out TampaSuperstars.com too for my fitness tips. I developed that site myself.”

Idol is back in circulation after seemingly being a mysterious recluse, and has started on the convention circuit.

“I did enjoy seeing so many of the boys at the Charlotte reunion, which was my first event like that. Had a blast meeting people who enjoyed what I did and who love this business like the boys do. It was also great to see some of the guys and how they’ve held up. Stan Hansen and I are long-time close friends and we got to have lunch. Still a great, great guy. And all the things he accomplished in this business. I was also hoping to see my old Australia buddy (Mark Lewin) there but we were all too busy signing. There were so many there from my era like Flair. I’m looking forward to Sal Corrente’s L.A. Wrestlefest that’s coming up next for me. Stan will be there again too, plus you, Bruno [Sammartino], and some big time Japanese names (Jushin “Thunder” Liger, Keiji Muto).”

Other than Hansen, McCord really didn’t stay in touch with anyone since he walked away from wrestling. “But I still love it. Always will. It’s just a different industry now. I just went on to do other things and put my family first. And many never walk away when they’re on top. I tried my best to.”

He’s done a shoot interview DVD and will tell more. “My upcoming book will tell my story and there isn’t anyone else on the planet who has one like it. I’m just living proof you can succeed and achieve anything you set your sites on in life! The best is yet to come for all of us.”