There is no place to eat in the world like Manhattan, and if anyone there eats at a fast-food chain, TNA’s Desmond Wolfe might call that person a “window licker.” There is something unique to be found for every palate, from the best vegetarian restaurants (Red Bamboo near NYU) to controversial meat-lovers restaurants (kangaroo meat, anyone?). Wrestling-themed restaurants, too, have come and gone in the City. However, a new restaurant that has just opened in the East Village is a place that will please both those into fantastic food, and those into extravagant decor: La Lucha. 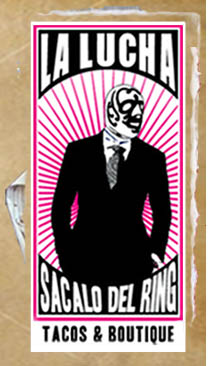 Themed restaurants are a staple in Manhattan, where the food is less than savoury, but where patrons are more interested in visual opulence, such as a sci-fi themed restaurant in Times Square, or a restaurant that models itself after ninja assassins and their lairs. La Lucha is a rare example of a restaurant which has both excellent food and is a feast for the eyes.

For fans of Lucha Libre wrestling and authentic Mexican food, La Lucha is a must-go destination. Happily far away from the tourist trap of Times Square, the journey to La Lucha takes you through the hip East Village, and a suggested street to take you there would be St. Mark’s Place, where punk and goth fashions will prep anyone for the even more extravagant costumes of Luchadors. The restaurant itself is located at the border of the East Village and Alphabet City, which adds to its alternative mystique.

The food is some of the best Mexican food one will ever taste outside of Mexico. Please note that this isn’t horrible Tex-Mex food, but real Mexican food. La Lucha’s menu states in bold faced letters for all to read: “We proudly do not serve Burritos!” This was a fact that actually surprised some obese patrons seated near this writer, in WWE T-shirts, who were then perplexed as to what to order, and then complained “Who are these wrestlers? Where is Rey Mysterio Jr.’s poster?” 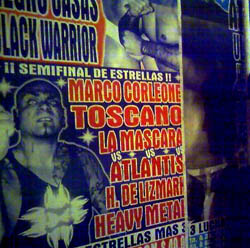 And it is their reaction that is a metaphor for the difference that one pleasantly finds in La Lucha. All of the four items from the menu that I tasted was scrumptious and totally unique. Each dish is painstakingly prepared by the chef, and is decorated as beautifully as a luchador’s mask. This is Mexican food as one would find in Mexico City, right next to the AAA arena, not near Madison Square Garden. In addition to many other dishes, there is an extensive list of authentic Mexican tacos, which are not like American tacos, in the sense that Mexican tacos are simpler, consisting of only the shredded vegetables or meat on top. The restaurant owners should also be commended for importing actual Mexican soft drinks, which are a must-have beverage. This is not a place to order a conglomerate’s cola beverage (though they do have such drinks, for the lame eaters out there). 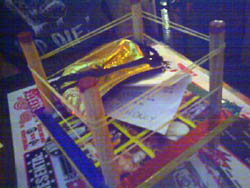 My bill. Photo by Ranjan Lucharesu.

But it is not just the food that should cause any visitor to or resident in NYC to make the trek to La Lucha. The decor is also a sight to behold. Authentic Lucha Libre posters imported from Mexico line the walls, as do limited edition Lucha Libre action figures that are respectfully placed along the wall, as if they were part of a shrine. To top it off, the restaurant projects Lucha Libre matches and other Mexican films onto a wall, adding to the allure of La Lucha. Having the dishes named after wrestlers is a nice touch, such as the “La Parka” Taco or the “Blue Demon.” The owners clearly respect Lucha Libre. New York Magazine even reported that the waitresses also wear luchadora masks, but this was nowhere to be seen the night I dined at La Lucha, which was unfortunate. One of the coolest things was having one’s bill delivered in a mini ring, with the bill inside a mini luchador mask.

La Lucha is the ultimate dining experience for those into fantastic food and wrestling. It hits a tope on giro on one’s tastebuds. The one minor criticism of the restaurant is that it does not accept credit cards. For visitors to NYC with limited U.S. cash, this could deter not only potential restaurant patrons, but also short-change hard working food servers, who might get a smaller tip because of their international patrons limited cash availability. If Sarita or Hamada themselves were to visit here directly from Mexico City, would one expect them to have a lot of U.S. dollars readily available? Perhaps a $10 minimum credit card order would be a fair deal for both the owners and patrons. Other than that, every SLAM! Wrestling reader in NYC owes it to themselves to experience the sights and flavours of La Lucha.

La Lucha is open Mondays to Wednesdays: 5pm to 11pm; Thursdays and Fridays: 5pm to midnight; Saturdays & Sundays: Special All-Day Brunch Menu, 10am to 4pm; Then Dinner Menu from 4pm to midnight. Phone: 212-260-0235. Get there early as it is a smaller establishment, with seating for only roughly 10 patrons. Cash only. No credit. Vegetarian friendly. Location: 147 Ave A. Take the 6 Train to Astor Place. Walk up St. Mark’s Place to Ave A. Turn left at Ave A. Website: www.laluchanyc.com.

EDITOR’S NOTE: The SLAM! Wrestling food reviewer ate at the restaurant anonymously, without identifying himself.