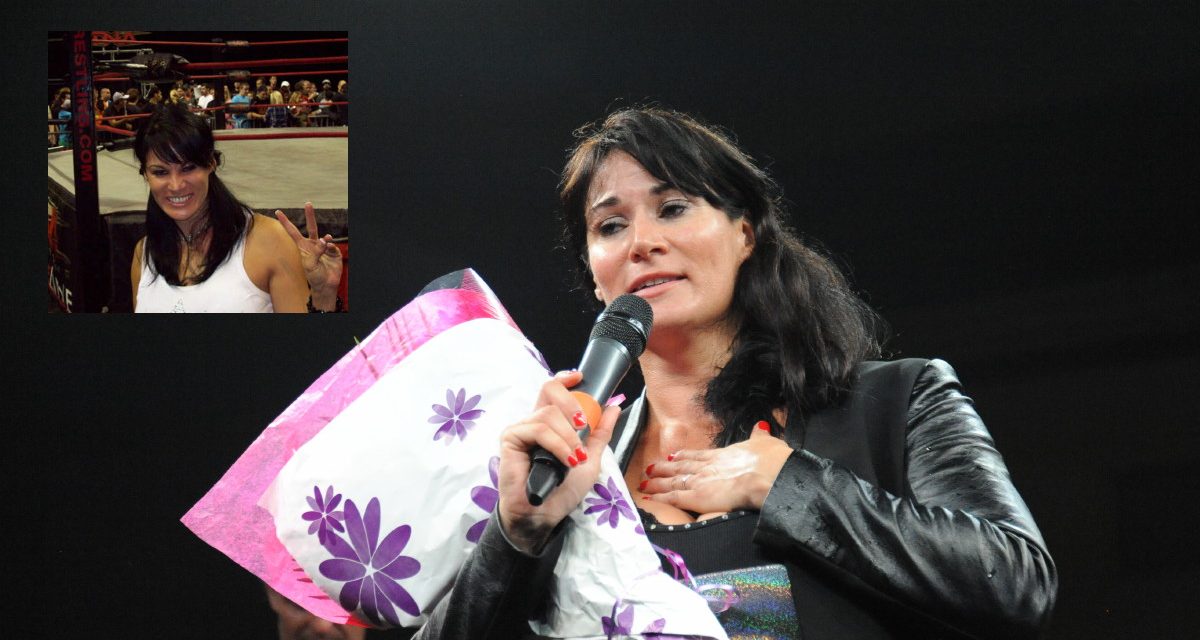 As a young girl, Traci Brooks used to sneak a peek at her father’s Playboy magazines and dream about being a Playmate some day. With the release of her online pictorial earlier this month, her dream has come true. She bared her soul about baring everything else in an exclusive interview with SLAM! Wrestling.

“I would dream that one day I would be pretty enough to be in that magazine and to look that beautiful,” she reminisced. “So this photo shoot was a dream come true for me.”

The pictorial is an exclusive to Playboy‘s CyberClub online site. Six of Brooks’ photos are available on the main site, and subscribers get access to 40 or so additional shots. The pictures, which feature Brooks in various stages of undress, truly highlight Brooks’ sexy femininity.

“I’m really happy with them,” she concurred. “I’m really proud of them. I hate saying this because I sound conceited, but I think I look beautiful in them.”

But the quality of the pictures, she said, were only the icing on the cake. The entire experience was remarkable from the minute she first heard about the opportunity.

“My agent was the one who told me about it,” she said. “I got back from a goodwill trip in Iraq in March, and I had an e-mail from him saying that he had talked with Playboy and they wanted to do a pictorial. So we approached (TNA President) Dixie Carter, and she was all for it, hoping that this could lead the way in opening doors for TNA and Playboy to work together.”

Beyond talking about it with her family and her fiancée (TNA’s Frankie Kazarian) to make sure they would be okay with her doing the shoot, Brooks didn’t tell a lot of people about it in advance. One person she did share the news with was her friend and fellow TNA Knockout Christy Hemme. As Hemme had herself done a Playboy shoot, she was able to give Traci some helpful advice.

“Christy told me to go out there and just enjoy every minute of it. She said, ‘I want you to look back on it 20 years from now and not regret not enjoying it.’ And I haven’t.”

The three-day shoot was an amazing experience according to Brooks.

“Everyone was so nice,” she said. “From the wardrobe people, to the girl in hair and makeup, to the photographer, they were fantastic. I’ve done photo shoots before for wrestling magazines, but nothing like this. I feel like I can never do another photo shoot again, because everything else will be a letdown. It really was incredible,” she gushed.

Feedback, she said, has been mainly positive, though she noted with some humour that most of the TNA roster have told her that they haven’t and wouldn’t actually look at the pictures.

However, inconceivable as it may seem, not all men who have seen the pictures have entirely liked them. Notably, Mark Madden the former WCW commentator. In an online posting about the pictures, Madden wrote that he found the pictures to lack a certain glamorous quality, comparing Brooks to a stripper as opposed to a beautiful model. For her part, Traci is unfazed by the criticism.

“I can’t control if someone doesn’t like them,” she said graciously. “There are tons of people, I’m sure, that don’t. But compared to all of the positive response I got, and the fact that TNA is happy with them, and that Playboy is happy with them, and most importantly, how I feel about them, I’m not bothered by it. I can’t let someone else’s opinion ruin my dream.”

Fans will get the chance to tell Traci in person what they think about the pictures over the next few weeks, as she has several appearances scheduled in the weeks leading up to TNA’s annual Bound for Glory pay-per-view, taking place on October 18th in Irvine, California.

“This Friday, I’ll be doing Playboy Radio as promotion for the photo shoot and for the pay-per-view. I’ll be there all day, eight or nine hours, so I’m pretty excited about that. On Saturday, the day before the pay-per-view, I’ll be at Frank and Sons from 10 a.m. to 4 p.m. Then I’ll be at the TNA interACTION Fan Fest, which is always a really good time.”

While Traci doesn’t know whether she’ll actually be in action at the pay-per-view, but regardless of her role, she’s looking forward to the event.

“It’s going to be an awesome time,” she said. “We’ve never been out there before, so it will be a different crowd, a different feeling. Don’t get me wrong, we love and we’re so thankful for all the fans in Orlando, but it’s always nice to get out to a new crowd every so often and get a different vibe.”

While she would love the opportunity to wrestle in front of that crowd for either the TNA Knockouts singles title or the newly created Knockout Tag Team titles, Brooks is fine with whatever role she might be asked to play at Bound for Glory.

“Right now, I’m just concentrating on being with the Main Event Mafia. Since the very beginning, TNA has always done everything right in my book. So whatever they have planned for me, they know what they’re doing.”