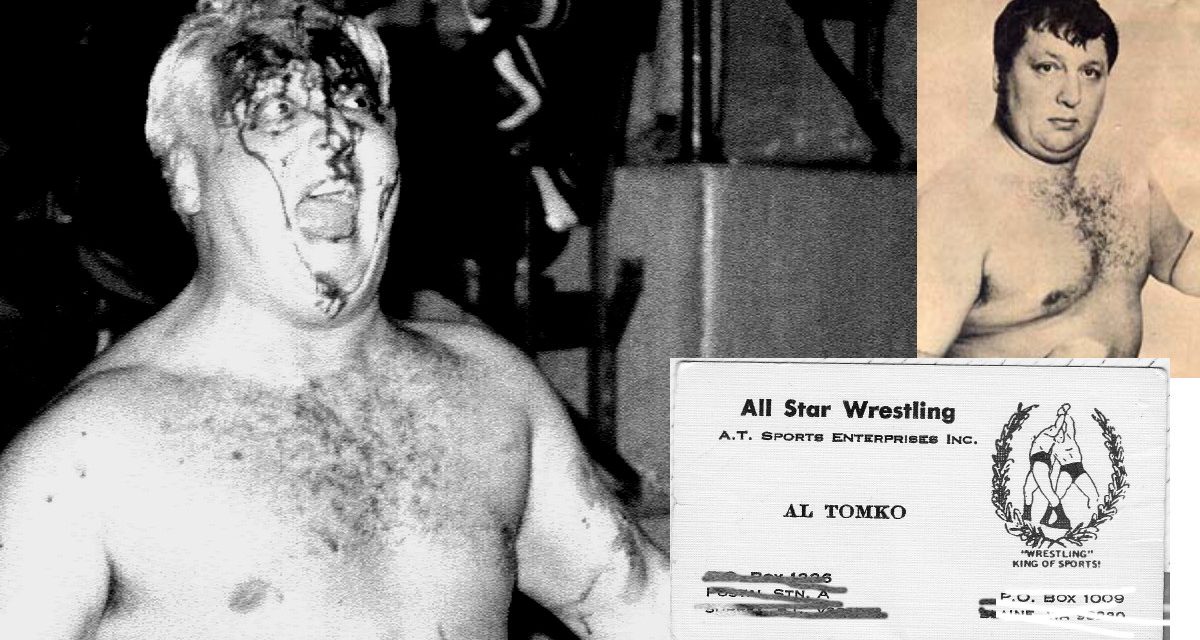 I have decided to write this article for two reasons.

One, to give my opinion of how I remember Al Tomko.

And two, to correct an omission in a previous article.

I first met Al Tomko when I was a “mark.” I, along with my two buddies, Allen French and Dave Greenaway, would attend the matches at the old Civic Auditorium in Winnipeg. I was working for the U.S. Consulate General at the time in Immigration and Visa Control. Since there were a lot of Canadian wrestlers at the time who wanted to work in the U.S. legally, Al would send them down to see me for advice. And he graciously let me take photos of the wrestlers and wrestling matches for my personal use. More on this in a later article. 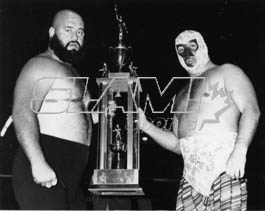 And he took care of me when I got my first big lay-off from my regular job. The U.S. Consulate General job was already a thing of the past at this time. He gave me side jobs which put extra money in my pocket to support my family. With him, family was very important. This may seem funny to some people, but he had his father selling programs for him at the matches. And when his kids got old enough, they were drafted into the business. He started up A.T. Promotions and 4-T Promotions (named for his four children Tanis, Terry, Todd and Trisha) in a small office where, along with selling tickets to upcoming wrestling matches, he also sold wrestling novelties and photos. I still have crates of some of those old novelties from the mid-’70s down my basement as I bought him out when he was leaving Winnipeg for Vancouver.

Another funny thing, is he started his pet food business because of his pitbull, Tyson.

I remember a wrestler in WWE in the recent past named Tyson Tomko. Was this a secret tribute to Al or a rib played on the fans by Vince and the boys?

Al Tomko wrestled as The Zodiac from about 1975-76 for the Central Canadian Wrestling Alliance, a sideline independent wrestling promotion he created for matches he ran in rural Manitoba.

The reason I remember The Zodiac is that I was offered the job of being his “manager.”

Tomko said to me, “Ya wanna get into the wrestling business?” I figured he was starting up something new and that he was going to offer me a job selling his wrestling novelties on the road or something. But, he offered me the job of being The Zodiac’s manager. (I should mention here that The Zodiac was a gimmick used previously by Bob Orton Sr. in Florida, and later by Barry Orton in Stampede.)

Al said to me, “Ya have to gain some weight first!” He then gave me the recipe for a super milkshake which must have contained about 2,500 calories. You took two raw eggs, a brick of vanilla ice cream, a pint of whipping cream, a banana or two, and two packages of Carnation Instant Breakfast and threw them into a blender. Plus you had to eat about a quarter pound of cheddar cheese and Ritz Crackers. I was gaining about five pounds a week on this diet plus eating my regular meals. I was also spending a lot of time at the gym and achieved a 42″ chest & 28″ waist. I don’t think that’s not bad for someone who is only 5’5″. Al was pretty proud of this and mentioned what I would be getting paid for being a “manager” — which really wasn’t worth mentioning. But then he said “plus we’ll pay all your medical bills.” This is where my wrestling managing career ended.

After he left Winnipeg, he held one or two matches in competition with the A.W.A. bringing in his “boys” from Vancouver. I was allowed to take pictures of those matches too.

I spent a lot of time on the road in Manitoba with Al when he promoted the rural areas. And I learned a lot about the business from him. Mainly, don’t turn your back to anyone because you’ll get screwed every time, even by those you trust.

Yes, he was a con man, a carny, and a lot of other things. But he was a human being first, last and in-between. And like all human beings he had his faults. He supposedly screwed a lot of people but as I learned over the years, you have to look after yourself and those close to you first because no one else will or would.

Hope you enjoy those two shots of The Zodiac that I’ve included with this article. 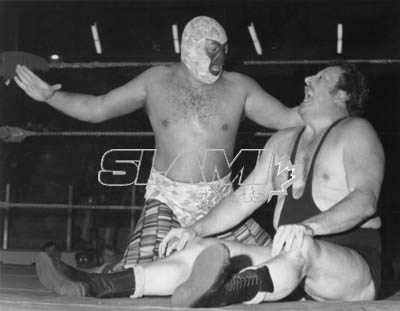 The Zodiac gives Frenchy Dubois a chop to the throat. Photo by Terrance R. Machalek Sr.

Al wasn’t the greatest promoter or wrestler in the business but he had creative ideas, some of which were way ahead of his time.

The wrestling novelties that I previously mentioned are just one example. The entrance music for the wrestlers that was mentioned in another article was another.

And lastly, something that Al Tomko was severely criticized for, which was later used by Vince McMahon and probably by a lot of other promoters (including Verne Gagne) before this, is putting yourself and your family members first. Making himself champion. And pushing his kids into the business. Hey, wrestlers may come and go, but you’re stuck with your family.

Al Tomko, you’ve got a lot of great wrestlers and promoters in “The Great Beyond.” What kind of booking and territory wars have you got lined up? I’m sure that we’ll hear all about them when we get there.

Al, you were my first real contact in the “wrestling biz” and I’ll always remember you.

Terrance R. Machalek Sr. is a long-time Winnipeg photographer, contributor to countless wrestling magazines, and was the publisher of the Canadian Championship Wrestling newsletter.