The cellular phone is used for more than calling a tow truck when you car gets stuck. Cell phones now feature email, web browsing, music, videos and applications. The leader in cell phone applications is Apple’s iPhone (also the non-cellular iPod Touch features all non-phone applications), which allows users to download thousands of application to use on their phone. 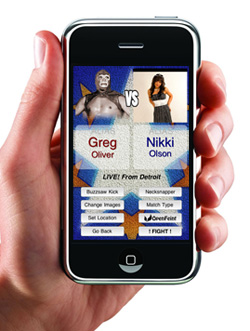 The downloadable applications, or Apps for short, range from functional to useless. You can browse from a powerful credit card processor to a useless fart noise maker in seconds.

Apple smartly allowed anyone to create Apps for download in their iTunes store, allowing really no parameters. Wrestling was no exception, but the selection is very small. WWE has yet to release an iPhone application of any kind and TNA’s entry created little buzz when introduced. A few websites created Apps to show abbreviated versions of their web sites.

Below are some of the larger and most popular wrestling Apps available for the iPhone and iPod Touch. 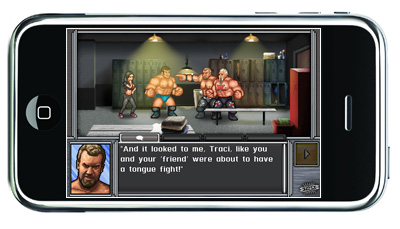 TNA Wrestling, like the real thing, contains a lot of backstage chatter. The chatter help you dictates things, like if you want to be a face or heel.

TNA Wrestling from Longtail Studios: This is the only App that features real-like video wrestling. Do not buy it expecting a great interactive game because you will be disappointed. The actual wrestling is great but it takes minutes to get to action. The game is overrun with talking and more talking. It’s like a TNA iMPACT! episode where it takes 10 minutes of talking and angles to lead to a two-minute match. You can create a character of yourself and work through a career mode. You wrestle a few nobodies before finally being able to wrestle some on the TNA roster including Scott Steiner, Christian (they have not updated it to take him out) and Samoa Joe. One drawback, though, is your also wrestle a lot of generic wrestlers.

Although the talking and angles take up a good chunk of the game, they are interactive as well. An example is when you see Sting and Abyss fighting in the locker room, you can choose to hit one or the other with a chair. You choose the direction you want to take.

The App has been discounted to $1.99 and it is well worth the price. It’s the most interactive of the wrestling applications and can be enjoyable after disregarding all the filler. TNA can offer updates in the future, if they like. I would like to see TNA release a separate App that features more of a short version of their website with news and videos. They promote themselves for the Internet fan but are dropping the ball by not providing this. 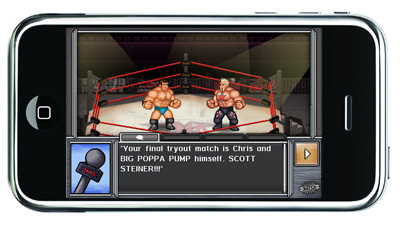 TNA Wrestling’s in ring action is not like something you’d get on a Playstation, but slow fingers will help you lose a match.

The Main Event by Awesome Taylor: This is an old fashion role-playing wrestling game. You give yourself a character, including special moves. You can then use contacts on your iPhone as opponents. Give everyone their own finisher and look. And then present the generated match results on Facebook or Twitter. If you like role-playing games like iMobsters then this is for you. You build a career and slowly strengthen moves, skills and unlock special matches and opponents.

Alan Taylor, the creator of the program, believes wrestling fans would enjoy the App. “It’s surprisingly good fun,” Taylor told SLAM! Wrestling. “Even your friends who aren’t wrestling fans are probably going to get a kick out seeing who they win and lose against.”

The App is a steal at 99 cents, and Taylor expects to give free updates in the near feature that may include triple threat and tag team matches.

Wrestling-Online.com, PWTorch.com and ProWrestling.net: These three web sites have been very smart to introduce an App version of their web site. This allows a user to quickly open an App and check out news more quickly than surfing through a browser. Each one is built similar with a main screen but also the capability to check out just WWE or TNA news or extras (varying on the site). They are all free, so download each one and see which one is best for you. I think they are all similar and one could offer a bonus with a Twitter-like feed with short, but frequent news and rumors. Although these are all simplified versions of their websites, they need to simplify it even more. There are often too many features, and these Apps are more for people on the go, who want something quick, short and to the point. 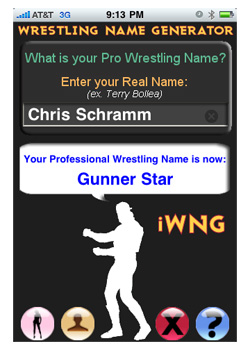 iWNG – Wrestling Name Generator is a 99 cent application (in the U.S.) that is good for a chuckle or two.

iWNG – Wrestling Name Generator by Hyperspectives: This 99 cent application is enjoyable while at a party or with a bunch of wrestling fans. It’s pretty easy; type in your name and it will give generate a wrestling name for you. For me, I would be known as “Gunner Star.” SLAM! Wrestling’s producer Greg Oliver would be “Napalm Ironstorm.” NFL quarterback Tom Brady would wrestle as “Double Hellfire.” Entering some celebrity names will create funny replies like “What good would generating a name for Tom Cruise do?” If you think you have a good use for it, download it for a few chuckles. It’s a great conversation piece.

Pocket Wrestling by ST55: This is a simple and basic sound generator featuring favorite saying from the world of wrestling. It is only limited to nine sounds, and you get the basics like Ric Flair’s “Whoooo” and The Rock’s “Know your role.” The application has promise but most 99 cent sound applications feature dozens of sounds. Save your money on this one until they update it with more sounds and features … if they ever do.

The WWE has yet to step into the App world, and they are the ones with the largest resources to do so. Yet, smaller websites have already done what they can do. WWE and TNA can easily make an App version of their website, simplifying the site with straight news and maybe a feature or two. Also, use the App to get quick feedback on shows, ideas and storylines. If the WWE ever holds a “cyber” voting event again, make it possible to vote via a WWE App. The future is now, and the wrestling world is falling behind.

Chris Schramm has been writing for SLAM! Wrestling since 1997. He is addicted to the iPhone and hopes one day he can review an application put out by the WWE. You can reach him at chris.schramm1@gmail.com