TORONTO — Chris Jericho can remember the time when first heard the idea of a Smackdown TV show. He was toiling in WCW, which was on its last legs and while the concept sounded interesting, he had also seen Thunder, a similar WCW show that was less than stellar. Now 10 years later, and with WWE’s Best of Smackdown 10th Anniversary DVD at hand, he sat down with SLAM! Wrestling to discuss the show and even named his 10th Anniversary Smackdown All-Star Team. 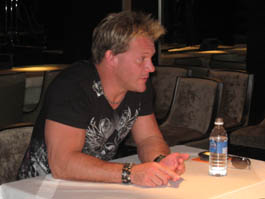 Chris Jericho answers questions prior to Monday Night Raw at the Air Canada Centre in Toronto. Photo by Kenai Andrews.

Looking relaxed and comfortable, Jericho was one day removed from the Breaking Point pay-per-view in Montreal when he spoke before Raw at Toronto’s Air Canada Centre. He commented on the Canadian road trip and his title run with fellow unified tag team champion Big Show. “It’s great. We just did Calgary and Edmonton a couple of weeks ago and now being in Toronto and Montreal. We did Winnipeg in February, so I’m glad that we have more of a presence in Canada this year in 2009 than we had in the past, because it’s a big market, great fans; and a lot of the guys in the crew are Canadian, so might as well exploit that a bit more,” he observed.

He’s a big fan of his partner. “I like the chemistry with Big Show, I think every match that we have now, has a pretty good flow to it.”

Jericho was on the outside looking in when Smackdown first debuted back in 1999. “We had Nitro and then they added Thunder to the schedule, which was kind of a bad decision at the time,” he recalled. “Because they really didn’t have the brain trust behind it to make it work and Thunder became kind of a red-headed stepchild. I used to watch it just for the pure bad comedy of it, how bad it was. So when I heard about Smackdown, I thought it was interesting, but obviously the WWE is a lot different from the WCW and how the hierarchy is.

“I didn’t know it if it would be a little bit too much. You never know if it’s going to be too much TV. And here we are 10 years later, and it’s just become a common thing, the fact that we have the two major shows being on every week. I guess in hindsight there was enough room and there was enough fan base to have two separate shows. Because when Smackdown first came out, it wasn’t a separate brand, it was just you’d go do Raw and Smackdown, similar to what I do right now. It was just another way to get some exposure, and get your storylines out.

“I guess in retrospect, it turned out to be a pretty successful thing.”

He broke down his memorable Smackdown moment in which he and then Alliance member Rhyno wrecked the original Smackdown set, which was scheduled to be replaced.

“It ended up being a pretty good thing. We didn’t even have to do much work to do it. He hit me so hard that I think I broke through the screen. It turned out to be a pretty good visual.”

Jericho weighed in on the question still kicked around by fans today: Was the “Brand Extension” a good idea?

“I think it was a better idea then than it is now. There was a lot more talent when they did the brand extension,” he said. “You could actually split the rosters in two; create some competition for ourselves, especially after WCW went under. Sometimes I wonder if we should still do that with talent roster the way that it is with a lot of younger guys. It’s a good idea to give them a chance to shine, but for me the way right now, especially working Raw and Smackdown, it shows that some guys should do both shows because we need the diversity on both. But still, week in and week out, they still make it entertaining, build up a lot of Smackdown and they do it more on Raw as well, there’s room for everyone on the show, some just have to kind of grab the brass ring and run with it.

“I’m happy to be on both shows, I like contributing to both.”

While there is a lot to celebrate on the Smackdown DVD, there was also an acknowledgment that the show — and the company for that matter — needs to continue to focus strongly on the things that made it successful in the first place.

“Creating new talent, creating new stars. That’s the most important thing for any of the brands to do,” he quickly answered. “They have to keep the wheels turning; they can’t just base it on the same guys year in and year out. That’s how business fails; that’s how WCW failed.

“We have some young guys that are ready to grasp it and there are other guys that aren’t. They’re going to have to speed up the process a bit.

“I think that Morrison is learning more each week, I think Dolph Ziggler is learning more each week, Cryme Tyme have learned a lot over the last few months. Legacy is getting there, Jack Swagger, Kofi Kingston and The Miz; those are the guys that are going to have to start becoming more of a presence. A couple of guys in ECW, Evan Bourne, Sheamus is another guy that I think has some potential.

“So now is the time, we need these guys to step up and the thing is too, is you say step up, step up, step up, but some guys just aren’t capable; they’re not ready because they don’t have the experience yet. But as long they are improving every week, and those are guys that I kind of see as being the next wave of the company, when my generation of guys is retired or not at the same level as we are now.”

When asked if the addition of Jim Ross was a good brand move, Jericho noted the last year’s draft helped Smackdown from a respectability standpoint.

“I would say so, I remember last year when they did the draft, Triple H, Jeff Hardy and Jim all moved them to Smackdown to kind of give them a big presence, a big jump start when things started on MyNetwork TV.

“Jim Ross is the voice of wrestling, you hear his voice you automatically know it’s the WWE. I think to have Jim on the show definitely gives Smackdown more credibility just by the fact that he’s appearing on it.”

Due to his schedule, the sequel to his successful book, A Lion’s Tale: Around The World In Spandex, will be delayed from its original fall 2009 timetable. However, Jericho’s band Fozzy will be releasing their new album early next year.

“Our new record comes out January 19th, worldwide,” he revealed. “The new song is actually up on YouTube right now, it’s called Martyr No More. It’s got a really big buzz behind it right now. It’s going to be a big record for us, I’m very excited.

“It’s funny because we started as just a hobby, the first three records were fun and the last record really kind of put people’s mind into different places like, ‘This is a great record, this is a real kick-ass band.’ And now it’s been four years — actually ended up being five years — since all our names came out so there’s been a lot of people asking because I think they thought Fozzy was actually really good. When they hear Chasing the Grail, which is the new record, it’s going to blow people’s minds because this is going to be the rock record of the year. I’m not just saying that; I think it’s going to be hard to beat this record, I believe it’s that good. All the people that have heard it, from the executives to the suits, to everybody else feel the same way.

“It’s just building right now. The Clear Channel doesn’t know which song they want to pick as the single because they said there’s six songs that could be the single on this record, so I guess that’s a good problem to have. It’s all building, like I said we don’t come out until January so we kind of have a long road to go and build everything properly. We didn’t want to rush it.”

He was quick to torpedo the notion of retirement any time soon. “My contract is for another year, we’ll see what happens after that,” he said. “I feel great though, I’ve still never been injured — knock on wood — and honestly believe that the work I’m doing now is the best that I’ve done in my whole career, so I could pretty well continue going probably for as long as I wanted to right now barring any kind of serious injury and I haven’t have had one in 19 years, so why start now?

“It’s pretty much just an open field; just have to kind of decide where I’m at mentally. A couple of years ago I had to leave because I had been doing it 15 years straight. I needed to get away and clear my head. I did that, came back with a whole new batch of ideas and a whole new character. Like I said, a whole new batch of guys to work with, which is important, which is why some guys need to start getting more steam behind them, which they are. As long as I’m enjoying myself and as long as I’m am able to be creative and to keep entertaining the fans — whether they love or hate me — I’ll stick around.”