There are a lot of smiles around New England Championship Wrestling. And why not? They just recently signed a one-year deal with Comcast SportsNet New England that will give them access to millions of viewers.

In other words, it represents a hell of an achievement for any indy league. 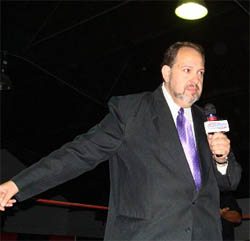 “It is a regional sports network that reaches 4.8 million homes throughout the six New England states — Massachusetts, Maine, New Hampshire, Rhode Island, Vermont and Connecticut,” said the promotion’s co-owner and promoter, Sheldon Goldberg. “It is also available on satellite sports packages, such as on Dish Network and Direct TV, throughout the United States to a total of 38 million homes across the country. In that sense, it is a national deal.”

“There are a couple of other groups in the region that are on conventional TV, but not with this much market penetration. With this deal, NECW will be seen in 100% of the New England region and will be in more homes domestically than Ring of Honor,” said Goldberg.

Goldberg would not discuss details of the agreement, except to say the network is “very involved in helping us promote this and making it a success, and oftentimes that is the difference.”

He added that the announcement, made at a show last month, moved everyone on the roster.

“When our locker room was informed of the deal being made, which happened just 90 minutes before we made the announcement public, the emotion was incredible. I saw everything from people jumping up and down like little kids, to grown men with tears in their eyes,” said Goldberg. “NECW has been around for nine years, many of our guys have been in or around the business a lot longer than that. So you can imagine that getting a break on this level was and is a very big deal for everyone on our roster.”

NECW was founded in August 2000 and has been producing original wrestling programming specifically for distribution via the Internet. Its Internet TV show, NECW TV, will celebrate its fifth anniversary in November.