Evan Ginzburg is using his nearly 20 years in professional wrestling to bring something totally unique, (and possibly bizarre), to New York audiences this weekend.

“As host of Legends Radio and from all my work in wrestling and in doing casting for The Wrestler, I have seen just how much talent wrestlers have outside the ring. When I met ‘Professor’ Paul Pope, an indie star who has produced, written and scored full-fledged musicals Off-Broadway, along with his other wrestler buddy ‘Mr. Everything’ Johnny LeDoux, who is an improv artist, the idea came to me to put them all together with Johnny Valiant and do a two hour show of skits/bits/stand-up/Q&A/meet-and-greet, etc.,” said Ginzburg. “Valiant’s critically acclaimed one-man show is the centrepiece.” 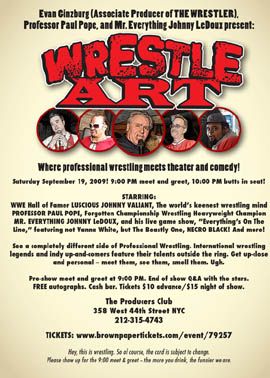 “There will be no wrestling, but everything will be more or less wrestling-themed… Johnny Valiant will be our regular featured performer on every show, but we have other legends lined up for future shows.”

The WWE Hall of Famer promised he would deliver the goods but was coy about just what he would be bringing.

“I have no idea until I get up on the stage. When you have the talent like I do, you have nobody writing for you; you write your own stuff. I just get up and bang it out, you know?”

“Luscious” Johnny V — a two-time World Wide Wrestling Federation Tag Team Champion and manager who led Greg Valentine and Brutus Beefcake to the WWF tag belts in 1985 — said he will have carte blanche when it comes to his performance. 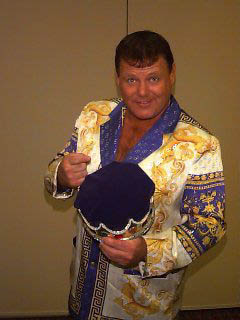 “It can be anything. You never know who’s going to show up. I can get up and do an hour-and-a-half, I can get up and do ten minutes. I don’t know. It all depends on who comes to the dance. That’s one of the things when you have a certain amount of untapped into talent that I have, 30-some years in show business, and 62-years of age, forget about it. What’s there to write? Who can write for me? It’s like Neil Armstrong on the Moon.”

Any subject under the latter is also fair game, as Valiant has demonstrated during previous engagements of his one-man show.

WrestleArt takes place Saturday, September 19, at The Producers Club at 358 West 44th Street, New York City. The pre-show meet-and-greet begins at 9:00 p.m., and the show gets underway at 10:00.