Get your Van Dam fill through RVD TV

Whenever people ask Rob Van Dam how he’s doing, he always says: “I feel happy, I feel healthy, I feel terrific.” He suggests you say it also, and repeat the mantra four times as “your positive inspirational exercise for the day.” 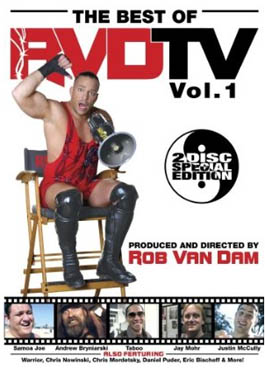 Nuggets of wisdom such as these can be found on the new DVD, The Best of RVD TV Vol. 1, distributed by Big Vision Entertainment. The back of the DVD case states: “When one of wrestling’s most popular personalities stepped away from the ring at the height of his career, fans were shocked and demanded a return of ‘THE WHOLE FN’ SHOW.’

“And return he did, but not to the squared circle. Rob Van Dam took to his personal website and launched a groundbreaking reality series, RVD TV. For the first time ever, fans were able to not only get a glimpse into the life of the mega star, but to truly get to know the real Rob Van Dam.”

The DVD includes 10 “Five Star” episodes, personally selected by RVD. The first episode, “Monster Mansion,” is similar to an MTV Cribs show as RVD takes a tour of his friend Dave Defalco’s mansion high up in Hollywood Hills. A movie producer and director, Defalco’s home is packed with horror movie props, and includes an entire room dedicated to the 1974 classic, The Texas Chainsaw Massacre.

Along for the tour is RVD’s friend Andrew Bryniarski, who played Leatherface in the 2006 movie, The Texas Chainsaw Massacre: The Beginning. Like kids in a candy store, RVD and Bryniarski move from room to room checking out full-size replicas of E.T., Grandpa from The Texas Chainsaw Massacre, a bust of Mighty Joe Young, and countless rubber monster heads. The episode concludes with Bryniarski, an imposing 6’5″, 270-pound former body builder repeatedly quoting Thulsa Doom from Conan the Barbarian: “What is steel compared to the power of the hand that yields it?” Not exactly “Must See TV,” as the back of the DVD case states, but fun nonetheless.

The episode “Waves of Zen” has RVD stretching by his pool, while explaining the concept of yin and yang: “Good and bad, dark and light, male and female, positive and negative,” says RVD while soaking in the sun. “The yin yang keeps me peaceful and positive — working towards inner peace.” For five minutes, RVD shares insight on his path to enlightenment while displaying an impressive array of stretching exercises. “I feel happy, I feel healthy, I feel terrific,” he repeats several times. “I really do. It puts you in that attitude of gratitude because we all have a lot to be thankful for, and a lot of time people lose sight of that. They’re in the wrong place.”

Even more impressive is RVD’s diving skills, as he and his friend and UFC fighter Justin “The Insane One” McCully take turns showing off their swan dives and half-twists in the backyard swimming pool. It’s here that RVD shows how much of his high-flying in-ring arsenal was honed in a pool as he exhibits breathtaking swanton bombs and toe-touch pikes. As RVD boasts, “It’s fun in the sun with RVD.”

The third episode, titled “Gun Control,” sees RVD debut a roundtable discussion known as “Friends in High Places.” Here, RVD sits down with his celebrity friends, “to discuss and debate the issues that matter to them.” His guests are McCully from the previous episodes, along with Chris Mordetzky (“The Masterpiece” Chris Masters). On the issue of gun control, it’s clear within minutes that McCully is pro-guns, RVD is against guns, and Mordetzky sits on the fence. Some of the funniest quotes come from McCully who says, “I think everybody should have the right to do as they please, as long as they’re not doing harm to others.” RVD responds, “Guns are killing machines and I wish they had never been invented. There’s too many f****** crazies and weirdos to give everyone the right to own a gun.”

Mordetsky chimes in with the idea that everyone should just carry a machete. When RVD raises the question of guns in the home and the possibility of children getting their hands on them, McCully says with conviction, “A four-year-old can’t shoot a gun. I’d say around eight, nine, or 10 (years of age), children can shoot a gun.” McCully follows up his statement with, “Guns don’t kill people — people kill people.” Mordetsky’s reaction is comical as he responds, as if he’s never heard this NRA cliché before, “Yes, yes! — that’s true!” RVD concludes, “Hey, we don’t got all the answers, we just got a lot of questions.”

Episode 4, titled “Book of Love,” has RVD chatting with his friend and theatre actor Marc Sheffler about marriage and the formula for long-lasting romantic relationships. RVD speaks about his parents as role models as his father once told him, “If you want to find out if she’s the one for you, ask yourself this one question: Can she be your number one priority always — because this is the one person you’re making a life-long decision to be with.” RVD then takes to the beach to find Samoa Joe as they share marital advice. Joe shares a great story about meeting his wife back in high school, while RVD beams while talking about his wife Sonya. “(Getting married) is the greatest accomplishment in my life,” says RVD. “A lot of people know what it takes to be married, but a lot of men don’t know what it takes to keep a wife.”

Episode 6, titled “LA Boxing,” has RVD sharing insight on his pre-match traditions, like sucking on two cough drops before he wrestles, “to lubricate my throat.” UFC fighter McCully returns in this episode to show RVD and Samoa Joe some mixed martial arts and grappling techniques. In one of the most exciting episodes of the DVD set, RVD and Samoa Joe practice takedown and submission moves on each other, then engage in a legitimate (but friendly) UFC-style fight as McCully looks on. “Holy s***!” says McCully. “RVD and Samoa Joe shooting it out.” Holy s*** is right as RVD and Samoa Joe go toe-to-toe in what looks to be an evenly matched fight, but with no conclusive ending revealed on the DVD.

Up next is another “Friends in High Places” episode as the topic of language censorship is debated between RVD and his Hollywood talent agent Kevin Turner, along with RVD’s friend Taboo (of the The Black Eyed Peas) and his son Joshua. RVD begins the discussion by raising the question, “When did certain words become inappropriate — where did that come from and who decided certain words should be censored?” Taboo is thoughtful and articulate in his response, as he speaks about his own efforts to learn and understand the role of censorship both as an artist and as a parent, while working to instill values in his son.

RVD says censorship is, “A total waste of energy — God doesn’t think that if I use the word f***, instead of truck, that I’m going to burn in hell.” His ideas provoke a healthy debate about the power of words, and how words are context dependent. In one of the funnier moments of the discussion, Turner responds to RVD’s liberal use of swear words by asking, “But would you want your child using language like that?” RVD responds frankly, “Hey, I wouldn’t want my child to watch pornography, but I don’t want you to ban pornography — because I’m an adult, and I’m a big fan of pornography.”

Episode 8, called “5 Star Cardio,” takes you inside the Van Dam-nasium, RVD’s home gym decorated with prints by the French painter Henri Matisse. Here, RVD shares his approach to running on the treadmill, toe jumps, front-jumping jacks, skipping rope, and hitting the heavy bag. RVD says, “Balance is the foundation of all movement,” as he teaches some balance training techniques on his Indo board, a fun device used by surfers and those looking to improve their co-ordination while increasing leg strength.

“Power of the Mind” is the last episode featuring “Friends in High Places” as RVD engages in more pseudo-philosophy, this time with friends and former pro wrestlers Chris Nowinski and (The Ultimate) Warrior. Together, they debate everything from the law of attraction and positive energy to psychological and physical addiction. Introduced as “the boy genius,” by RVD, Nowinski shares his research on health issues regarding, “the power the mind has over the body.” Warrior concurs, quoting Aristotle while touching on themes of human development, teleportation and human flight — if one believes they can fly. Warrior is also judgmental of, “people who take better care of their cars then they do their bodies — it’s pathetic, man!”

The heated, but friendly, discussion winds down as RVD says he’s a big fan of Rhonda Byrne’s book, The Secret, and applies “the law of attraction” to all aspects of his life.

The final and tenth episode, “5 Star Comic,” is a compilation of clips from RVD’s attempts at stand-up comedy. In his debut, comedian Jay Mohr introduces him as “The Whole F*****’ Show” to a warm and receptive sold-out audience at a Hollywood comedy club. RVD gets plenty of laughs, taking shots at comedian and friend, Bruce Jingles, whiles sharing some pretty funny road stories about getting busted for possession of marijuana. After the show, Eric Bischoff is backstage singing the praises of RVD, “I knew he was a smokin’ wrestler, but he smokes on (the comedy stage) as well.”

The DVD extras on Disc Two are pretty fun as well, with bonus footage from all 10 episodes. The highlight of this segment is RVD playing an arcade version of the classic wrestling video game, Exciting Hour/Mat Mania. Also included is a bonus episode that has RVD stopping by a recording studio to check out the production process of his new entrance theme, performed by the band Kushinator.

But the real gem of the DVD extras is a match between RVD and Booker T that took place in December 2007. It was RVD’s first match after leaving WWE, and it was for Booker T’s Pro Wrestling Alliance (PWA), an independent professional wrestling promotion based in Houston, Texas. Not only is the match superb as Booker T and RVD wrestle like it’s for a pay-per-view, but the few hundred fans in attendance are extremely vocal and appreciative for the rare opportunity to see two legends go toe-to-toe for nearly 20 minutes.

The best part comes when the match is over as RVD generously makes his way around the entire ringside area, making sure everyone in attendance gets a handshake. It’s a great feel-good piece of footage that illustrates what reputable superstars like RVD can bring to an independent promotion. The crowd is ecstatic chanting “RVD!” as he makes his way back to the dressing room, high-fiving fans all along the way.

Like the back of the DVD case states: “Fans get an inside look at some very interesting moments in the life of the former ‘Mr. Money in the Bank.’ ‘Often Imitated, Never Intimidated,’ RVD is truly ONE OF A KIND.”