How many people can say they became enamoured with wrestling after accidentally cracking their heads open while roughhousing as children?

“I remember one day when I was about nine, I was wrestling with my dad on the bed. I went up to the top of the dresser and gave a huge crossbody onto him. Then, I hit the headboard and busted myself open the hard way. I had to get six stitches. I felt pretty tough! And that’s when I fell in love with wrestling,” Sebastian told SLAM! Wrestling. 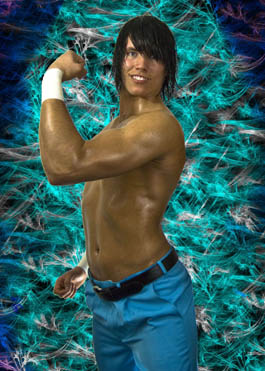 Born Kyle Kristensen, the 20-year-old, six-foot-three, 195-pound native of Lethbridge, Alberta, has already been a pro wrestler for four years. He inherited his desire from his father, who always wanted to be a wrestler, and had even trained at the Hart Dungeon back in 1986. But he never made it far; he soon met his wife-to-be and not long after, Kyle came along. Still, his father’s interest remained unabated, and he began passing that down when he took his three-year-old son to his first show — a WWF card.

“It was the first time I have ever got that feeling, that rush that you get when you see a live show. But, from as early as I can remember, I was wrestling around with him — on the trampoline, the bed, the couch,” said Sebastian. “Anywhere we could wrestle, we did. As I got older, he began to teach me the wrestling basics — just some basic moves.”

By the age of seven, Sebastian attended his first WrestleMania — 1996’s WrestleMania 12 — where he witnessed the Iron Man match between Champion Bret Hart and challenger Shawn Michaels.

“I have probably watched that match a dozen times since then, just to spark up the feeling I had that day. They had me hooked,” he said. “I remember watching wrestling with my dad every Monday night; it was a show that was never missed.”

“He began to teach me how to sell, how to call spots, and how to do more and more moves. That’s when we would put on trampoline matches for my mom and sister.”

Several years later, he would get a chance to improve on what he had learned. In April 2006, Sebastian spotted an ad in the local paper that offered anyone interested the chance to train. His father initially hesitated in letting his boy go, urging him to first finish his season of lacrosse. But after continuous persistence, father finally relented.

“I called Tim Strom, the head trainer at the PowerShop, and when I told him I was interested, he was a little bit leery of letting a 16-year-old train. My dad made a call and began to talk with Tim. They talked for at least two hours about everything wrestling. When he hung up the phone, I was anxious to hear what he had to say. My dad brought me the good news. Because my dad was trained at the Hart Dungeon and because he put me over very strongly, I was allowed to have a tryout.”

Sebastian demonstrated he was a quick learner, duplicating the basic front and back bumps he was shown. He won his chance to train, and during the next couple months, found he was able to pick up the lessons easily. Only the arm drag perplexed the young charge.

“No matter what I did, I just could not get over properly — every bump I took hurt. I knew I was going to get it, but there was still a little doubt. That’s all I would do, three practices a week, and once the practices were finished, I would go home and study tapes watching guys arm drag, trying to pick up what I’m doing wrong. It took probably close to 200 arm drags before it finally clicked. After that, bumping became easy. Any bump given to me, I was able to do first or second try.” 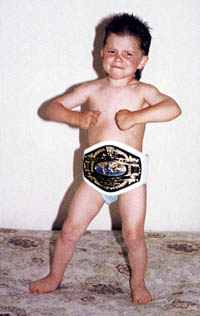 Still, as the drills became more challenging, the sailing got a bit rougher for Sebastian. On one occasion, when he went to chop block his trainer, he was too slow getting out of the way, and nearly suffered a broken arm as a result. It was only because he was not yet fully grown that his bone bent instead of snapping.

After five months of instruction, Sebastian had his first match at a show, appearing for PowerZone Wrestling (PZW) against another trainee.

“It wasn’t the greatest match I have had, but by far, it wasn’t the worst either. However, it was the first time in front of a live audience and it was a rush that I will never forget.”

Sebastian admitted that in spite of having the moves down, he still had a lot to learn. Fortunately for him, he had the chance to glean some of the wisdom of veteran performers passing through the promotion.

“It wasn’t until Vance Nevada came around PZW that I really began to understand the business. Before Vance came along, I was trying to make myself look cool with fancy moves. He taught me the story telling and psychology to use inside the ring, along with how to take care of and promote myself outside of the ring,” Sebastian said.

He noted he has used every blog and article Nevada has written to improve himself: “By far, he has taught me the most, and has made me the wrestler I am today.”

Nevada emphatically declared Sebastian to be “awesome” and among the rare few who showed tremendous promise early on.

“In my view, of all of the guys that I have ever had the opportunity to work with, only six ‘had it’ from the beginning,” said Nevada. “Those six are Andy Anderson, Mentallo, Kenny Omega, Ryan Wood, Kyle O’Reilly, and Kyle Sebastian. The rest of us had to work hard to master our craft, or are still working on it.” 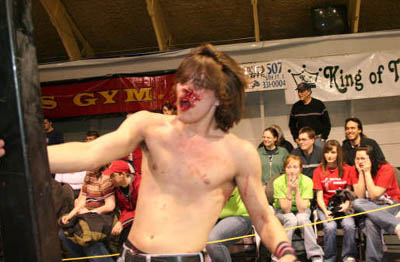 Just another bloody day in the life of Kyle Sebastian.

While at PZW, Sebastian also came up with his working name, a rib on door-to-door spreaders of “The Word,” that he thought might garner a bit of heat in the ring.

“I decided I should have my own religion… I wanted to be a Sebastian, just a goofy name that I really liked. The religion was called ‘Sebastianism.’ At first it really worked — everyone hated me. It could have lasted a long time, but more and more girls from school started to come and no matter what I did, they would cheer for me. That’s when my first group of fans called the Sebastianites came from. And because of those Sebastianites, I created my very first t-shirt. From then on it stuck.”

Sebastian has since spread out from PZW, and has had his share of memorable excursions, including two Northern Death Tours with Tony Condello.

“Some call me crazy for doing this trip even for a first time. The longest drive we had was 30 hours around the entire lake to get to the other side. The food was horrible… The coldest I remember was –50° Celsius without the wind chill.”

“He’s a good listener and I figured he had a chance at that time, but what I told him to do is keep practicing, do a little bit of lifting, and keep it up. You never know what can happen in this game,” said Condello.

Sebastian also remembered a six-week tour in the Maritimes for MainStream Wrestling, which also proved to be harrowing. “Once again, we had shitty dirt roads, and sitting in the back of the ring truck for eight hours at a time with dust coming in was not a great experience. We had blankets to cover our heads from breathing in too much dust.”

Gurv Sihra, who joined Sebastian in Northern Manitoba and the Maritimes, called him “a great guy to be around.”

“He’s one of the nicest people I’ve met in this business,” said Sihra. “I have no doubt that Kyle can go on to do great things in this business. He’s out travelling, touring, and making a name for himself across the country.”

Sebastian stressed the above tours were extremely important for his career development, as he wrestled often and with a lot of different talent — including midget Short Sleeve Sampson, who has appeared on TV for WWE and TNA — and was forced to learn on the fly about how to get over in towns were no one had ever heard of him. He also had the chance to meet a number of veterans who possessed knowledge they were willing to share.

“I have had the pleasure of working with Kyle a couple of times, and he understands the concept of telling a story in his matches, rather than hitting the ‘cool’ moves and doing every high spot he learned from watching YouTube,” said one of those seasoned performers, Wavell Starr.

For now, Sebastian said his goal is to wrestle in every province in Canada, as well as get on more cards in the U.S. He has already broken in there, having worked a few shows for Salem, Oregon’s West Coast Wrestling Connection. Sebastian also aspires to eventually get booked overseas.

“I want to be able to wrestle as my full-time job. But who knows where my wrestling career will take me? I am still only 20 years old,” he said.

“Kyle has the potential to become a major star with the proper influences and hard work. He’s very respectful and is obviously well trained in an important aspect many young wrestlers lack — etiquette and protocol,” said Starr. “I hope to get an opportunity to work with him again before his career takes off.”