Empire of Illusions reviewed: An egghead tells us who’s zooming who

Maybe it’s just a wrestling tall tale, but Adlai Stevenson, after losing one of his two races against Dwight Eisenhower for the U.S. presidency, was supposed to have said, “It hurts too much to laugh, but I’m too old to cry.”

That sums up how I feel about “serious” “wrestling books.” (The double dose of ironic quotation marks is intentional.) Some writers just don’t know how to take the moron out of oxymoron, and they shouldn’t inflict their on-the-job training on hapless readers.

Submitted for your consideration in this category is one Chris Hedges (if I may be forgiven for borrowing an old Gene Kiniski interview putdown). Hedges is a distinguished journalist and bestselling author. In his new Empire of Illusion: The End of Literacy and the Triumph of Spectacle (Nation Books, $24.95; 207 pages, no photos), Hedges uses the pro wrestling phenomenon as the launch pad for a jeremiad on the decadence of contemporary American culture. 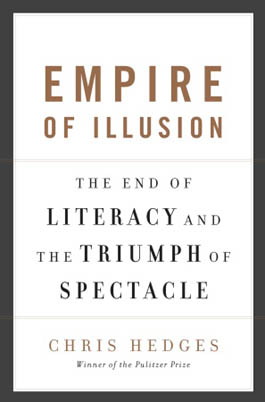 Well, OK. It turns out I have the same bug up my own ass. You can’t view the rise of “sports entertainment” outside the context of the end of the American Century, and anyone with even a passing familiarity with Edward Gibbon on the Roman Empire knows the telltale signs. This is no metaphor. It is epochal, real-time history playing out daily, at a remove, from al-Qaeda in Mesopotamia to Hurricane Katrina and all points in between, while we sit anesthetized in front of our TV screens,

The problem with Hedges’ take, I think, is that he’s the son of a Presbyterian minister who holds a master’s degree from the Harvard Divinity School. The result of all this moralistic ferocity and scholastic trappings is a verbal sledgehammer with a morbidity matched only by its reductiveness.

The hype on Hedges is his prowess as a reporter, but the eyewitness accounts here are flat-footed and dull-witted. More comfortably, he regurgitates big ideas: Christopher Lasch on narcissism, Neil Postman on the boob tube. He thinks Jerry Springer is the hottest thing going. He also thinks the blurring of the lines between wrestling’s heels and babyfaces is a news flash. An entire half-page is devoted to a footnote with data on the popularity of World Wrestling Entertainment. After all, you can’t take your intellectualized potato shots without first establishing your bona fides!

The book’s treatment of wrestling — which I’ll get to in a moment — betrays the agenda here, which is to usurp the credentials of a populist in order to deliver the tongue-lashing of an elitist.

In fairness to Hedges, the intended audience of the book is not fans. In fairness to the other half-billion denizens of North America, the book suggests that only its author grasps wrestling’s appeal to the lumpenproletariat. That this might involve, in part, their sense of humor, which is measurably more supple than his, does not occur to him.

Hedges’ beef, of course, isn’t just with wrestling. There’s also celebrity culture. There’s the cult of victimization. There’s “the illusion of love” — a fancy way of saying “the pornography industry.”

And there’s Las Vegas, “the corrupt, willfully degenerate heart of America,” whose strip is “a monument to our … eternal childishness.” Memo to Hedges: Las Vegas is also the capital of the resurgence of organized labor. But he’s not interested in complexity. Nor, apparently, was he interested in Henry James’ advice to writers to cool down before they write.

As for wrestling itself, Hedges favors us by watching TV and, in the book’s first 14 pages, transcribing angles. JBL taunts Shawn Michaels. The Undertaker buries Paul Bearer alive. Ray “Big Boss Man” Traylor mocks the death of The Big Show’s dad. (Hedges doesn’t seem to know that Traylor himself is now dead — which is part of the real outrageous story of wrestling.) Fit Finley (sic) nails Mark Henry with his shillelagh while Hornswoggle distracts the referee.

As Truman Capote used to say, that’s not writing, that’s typing. My sister and I used to do this kind of thing while we watched Wrestling at the Chase almost 50 years ago.

By the end of the book, what you encounter, besides relief, is the strong sense that it’s better to laugh than cry. Go ahead and let out a maniacal cackle, like Jim “The Anvil” Neidhart on Benzedrine. In Nathanael West’s The Day of the Locust, the protagonist hears a police siren headed toward the carnage of an apocalyptic riot at a Hollywood movie premiere. “For some reason,” West writes, “this made him laugh and he began to imitate the siren as loud as he could.”

Empire of Illusion, my friends, is that siren.