Kurt Angle had three of the four charges against him dropped in a Robinson Township, Pa., court today, a suburb of Pittsburgh. Angle was arrested and spent eight hours in jail after his arrest on August 15. 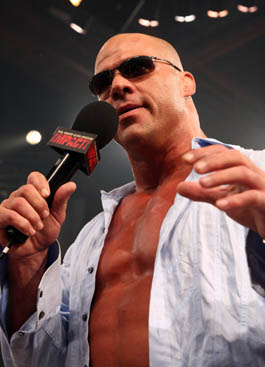 District Judge Carla Swearingen cleared Angle of charges brought by former girlfriend Trenesha Biggers, who wrestled for TNA as Rhaka Kahn. Charges of harassment, driving with a suspended license and possession of Human Growth Hormone (HGH) without a proper prescription were dropped today in court.

Angle was able to produce a prescription for the HGH in his car. Angle was cleared of a DUI last year and his license should not have been suspended.

Biggers used this charge to obtain an order of protection against Angle at his home in Moon Township. Angle told the judge he was looking for a hotel to stay at in his hometown to stay clear of Biggers when Biggers saw him near her at a Starbucks and called the police, leading to the arrest.

He still will face simple assault charges against Biggers which will be seen in a Moon Township, court next month. The protection order against Angle will also be examined at the same hearing.

“Out of my pure generosity of letting someone come at my house and said they’d stay a week and never left,” Angle told the media after the court appearance. “It taught me to be careful who you let in your house.”

“Basically I got taken advantage of because someone wanted money.”

Angle was able to move back into his home after the arrest while Biggers has left. She refused to comment after leaving the court today.