Toronto puts its own stamp on RAW

And with that, seven-time former WWE women’s champion Trish Stratus blessed last night’s RAW. She looked lean and mean, and the capacity crowd responded warmly to her return, despite booing her positive appraisal of previous guest host Bob Barker in her intro. 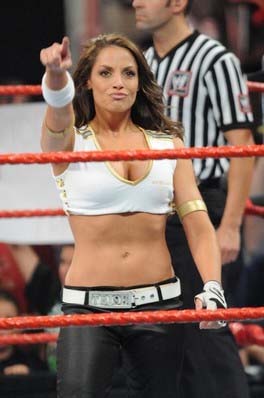 The Trish intro aside, the crowd energy level was inconsistent in the beginning. Fellow Canuck Gail Kim barely received a lukewarm welcome in her quick match with Alicia Fox, and it became apparent that everyone was politely waiting for the main event matchup.

Chris Jericho was cheered with a lot of “Y2J!” chants despite his heelish tendencies. In the same match, Mark Henry was cheered when he executed a nifty running shoulder block on the Big Show from the outside.

A lot of fans were expecting Trish to choose John Cena as her tag partner, instead of M.V.P.

The heat went to Randy Orton and Legacy.

Cena did not wrestle, and there was no DX ring entrance, which would probably have helped amp up the crowd.

Cena’s save attempt came when Legacy interrupted Batista’s celebration, with DX joining the fray and all four men cornering the beaten Randy Orton. They boxed him in like a wild animal, and patiently waited for him to realize his problem. It was a good segment that made for a nice finish to the night

There was nothing spectacular from a live perspective to crow about, it was simply a good show. The crowd got what they wanted in the end, which was the important thing.

In the dark matches before RAW, Sheamus was victorious over Jamie Noble, Christian defeated William Regal, and Santino despite locking in a Master Lock of his own, went on to lose to Chris Masters by submission.

In other notes, Jillian Hall came out with the Kiss Cam, after the Gail Kim-Alicia Fox match. It was also announced that Cedric the Entertainer is next week’s RAW guest host.