Montreal rocks along with Melina and John Morrison

MONTREAL — Nothing makes a couple of hours of an autograph signing pass by quicker than having good tunes. On Saturday at a downtown record store, it was Guns N Roses that had John Morrison and Melina dancing and singing.

“Guns N Roses reminds me of the days we were on the road with Joey,” Melina told SLAM! Wrestling, referring to the days when she was travelling with MNM — Morrison and Joey Mercury.

The successful tag team may be done, but there are still many triumphs ahead for Melina and Morrison, who were at an HMV store promoting the release of the Smackdown 10th anniversary DVD (officially out Tuesday) and Sunday night’s Breaking Point pay-per-view at the Bell Centre. Breaking Point, where all of the main-events must finish with a submission hold, will be the first PPV in Montreal since No Way Out in 2003 and only the third in history, the first one being the infamous 1997 Survivor Series or as it has been called ever since, the Montreal Screw Job. 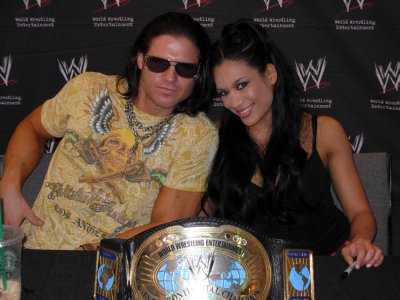 John Morrison and Melina in Montreal. Photo by Pat Laprade

Morrison originally had an Intercontinental title belt defense on Breaking Point against Dolph Ziggler, but it apparently got bumped in favour of The Miz challenging Kofi Kingston for the U.S. title.

Even with his match being put off, Morrison was in good spirits.

He acknowledged that Jeff Hardy’s departure left a void, but that doesn’t guarantee anything. “When someone leaves it doesn’t necessary opens the door for someone else,” Morrison said during a pause from signing for the 300 or so fans in attendance.

“I think I’m in a point in my career where I’m capable of main-eventing,” Morrison said, adding with real humility that he “was not as good a year ago.”

Being on Friday nights is the best place for him, he said. “Smackdown is the youngest show and the most entertaining. It is really the future of WWE with all those up and comers,” he said.

While Morrison versus Ziggler could always happen before the PPV in a dark match, Melina modeled an injured finger that will probably keep her totally off the show.

The three-time women’s champion was overwhelmed by the support she’s getting from the fans, and not just from her significant Latino fan base. “The Mexican fans are extremely loyal, but at the same time the fans have always been good to me when I traveled to Latin America, Europe or Japan,” she said, referring to her roots. “In Puerto Rico especially, the fans responded so well, it made me cry.”

The autograph hunters on Saturday afternoon were really into Melina and Morrison. Fans were pleased to have a picture with them or an autograph on such items as wrestling belts, pictures and even scrapbooks of their idols. Some fans were nervous to meet the grapplers, some were over-excited; in the end, all of them left with a souvenir they will never forget.

“This is why I became a wrestler,” said Melina talking about the reaction she was getting.