Rougeau has giant plans for Christmas

MONTREAL — Jacques Rougeau Jr. has always had a vision of what wrestling should really be — a family buying tickets to a Lutte 2000 event, and leaving the arena with satisfied smiles and memories of great matches without any violence. He believes he has achieved exactly that in 2009 and has more planned for 2010.

On Tuesday, at a press conference at the Magnan brasserie — a sports press conference hotspot in Montreal — Rougeau reviewed the past year and the dozen shows or so he did throughout Quebec, which he called all sold-out affairs.

As a company, Rouegau said Lutte 2000 is very pleased to with the direction it is heading, all the while seeing most of the other Quebec-based wrestling federations fold or go through difficult times. Already six shows are confirmed in 2010, with many more to come.

Many big names from wrestling were on hand for the press conference and his announce his annual Christmas shows (yes, shows). Apart from his usual students, other notables in attendance included his right-hand man and Rougeau wrestling school trainer, Eric Mastrocola, Jacques Rougeau Sr., former WWF star Tiger Jackson (Dink the Clown), former WWWF superstar and Quebec legend Gino Brito, and finally one of the best heels in the last 30 years, Michel “Le Justice” Dubois, also known as Alexis Smirnoff.

Although many greats from the past were present, Jacques was ecstatic to announce that his nine-year-old son Emile (he’ll be 10 in November) would wrestle on his Christmas shows. Emile is the third of Jacques’ sons to try wrestling.

Rougeau also has been doing the rounds of many schools throughout the province preaching that drugs and violence have no room in wrestling and has been very vocal against bullying in schools, a growing problem. His contagious smile and vast experience has been catching the eyes of the school “banquet tour” and he is now more in demand than ever. Lutte 2000, although not rich by any stretch of the imagination, has given a generous gift of $5,000 to Fondation Jean Jacques Mercier, an organization that helps those who can’t get government-funded help. 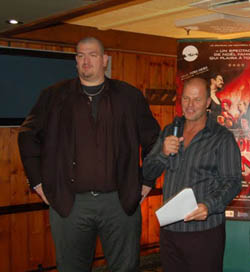 The Gentle Giant towers over Jacques Rougeau Jr. at the press conference on Tuesday. Photos by Yves Leroux

Not in attendance at the press conference, but key to the upcoming two shows at the famed Verdun Auditorium in Montreal — December 26th at 7:30 p.m. and December 27th at 2 p.m. — was Kurrgan, a regular foil for Rougeau. Kurrgan was filming yet another movie, this one starring Antonio Banderas. Though foes in the ring, Rougeau Jr. had a hand in the Acadian Giant landing his first movie role in 300, then a bigger role with Robert Downey Jr. in Sherlock Holmes, which hits theatres on December 25th.

The 7-foot Kurrgan will be facing Rougeau Jr.’s BIG secret weapon: The Gentle Giant, a 7-foot-3, 500-pound mountain. At Lutte 2000 Christmas show in 2008, this then-unnamed monster showed up at the end of the card for a very long showdown in the middle of the ring. Although only stares were exchanged, it was obvious that it would not the last time that mysterious giant would oppose Kurrgan.

Filling the Verdun Auditorium twice will be a big challenge for Rougeau Jr., who would be aiming at 9,000 tickets sold — but Rougeau is usually up for a challenge. Tickets can be bought on the company’s website.

At 48, Jacques Rougeau looks like he could still hold his own in any pro ring, but it’s his contagious smile and incredible determination for his wrestling students, his school tours and his daily interaction with everyone he meets which makes him one of the most positive people you could ever meet.