Online social networking both a boon and bane for pro wrestlers

As much as the Internet has proven to be a valued tool for wrestlers wishing to keep in touch with each other, promoters, as well as fans, it has also come to be a source of great exasperation thanks to impersonators and hackers. 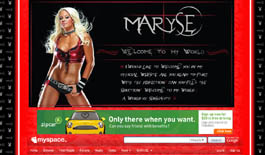 Maryse says having an Internet presence hasn’t been a hassle …

“There’s about 94,000 Kevin Nashes, and to me it’s ridiculous,” Kevin Nash told SLAM! Wrestling. “One of my friends got one of these (messages), and the guy (posing as Nash) said something kind of nasty to him. And he called me up and was really offended, and I said, ‘Dude, I don’t have one.’ It says on my official page that I don’t have a MySpace or Facebook or any of those things.

“I think the Internet really is kind of garbage, I really do. There’s just not enough regulation to it. It’s pretty much a pirate ship out there doing whatever the hell it wants to do.”

Admittedly, there are some stars, like WWE Diva Maryse and TNA Knockout Daffney, who have told SLAM! Wrestling they have not found themselves inconvenienced by the pretenders out there.

But then there is someone like Big Vito LoGrasso, who was subjected to what amounted to an invasion of privacy when his official MySpace account and profile were hacked into.

“Somebody broke in, got my password, they were basically posing as myself, I wound up having to close the account and I’ve lost a lot of contacts out of it,” LoGrasso told SLAM! Wrestling. “I had to open up a new account and try to generate all the contacts I had from that, and it’s a big hassle. People impersonate other people and they go into things that don’t belong to them? That’s a big problem.”

LoGrasso said he was lucky he still had the same cell number and bookings email he has used for a long time, but admitted that a situation like his could still potentially result in lost work.

“It’s a lot of nonsense and people should really just learn how to mind their business and stop going into other people’s things,” he said.

He added the Internet has also given an air of legitimacy to unscrupulous people passing themselves off as promoters trying to put on benefit cards, who go on to book name talent, and as soon as the show is over, run out the door with all the money. 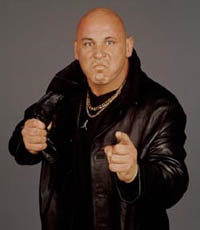 … but Big Vito is looking for the person who hacked his site.

“It’s like a ‘promoter’ just now who cancelled a show up in Camden, New Jersey, saying he was working for (police) officers who have families — that he was helping out their spouses and their kids — which was totally untrue. The guy lied,” LoGrasso said. “I know a lot of police officers in New Jersey, and as we speak, they’re getting ready to go to this ‘promoter’s’ house, pay him a visit, for false advertising and fraud, and if they choose to, sue him for fraud. Plus the fact he didn’t pay me my money and he bounced checks in everybody’s name. There’s got to be a stop to all this nonsense, when it comes to these phony promoters and phony people wanting to be all these guys, be it wrestlers, entertainers or sports figures.”

Sheldon Goldberg, who has appeared on A&E wrestling documentaries and serves as co-owner and promoter of New England Championship Wrestling, said he has heard of people signing up Facebook and MySpace accounts under the names of other local wrestlers and promoters for malicious purposes.

“I’m usually pretty careful about how I go about contacting people when I feel the need to do that,” Goldberg said. “This is why I created both, to keep someone else from using my name. I have found Facebook in particular to be a valuable tool.”

A completely different but nonetheless bizarre incident occurred recently in Winnipeg when someone incorporating the name of a local promoter into a Hotmail address sent out a fake press release to numerous news outlets, claiming the untimely demise of the city’s Tony Condello, a long-time promoter of wrestling and mixed martial arts shows. Fortunately the alleged story was quickly found to be false, but some harm was still done for death is not a subject taken lightly, especially in the wrestling business.

Brad Dykens, who runs Online World of Wrestling, has made attempts to weed out the spurious but has been stymied along the way.

“Years ago, I started on MySpace and tried to maintain a list of legit accounts, but it got way too frustrating and I gave up,” Dykens said. “MySpace in general got too out of control and I basically abandoned the OWW page until recently. I now see MySpace has taken efforts to improve their system, stealing many of Facebook’s features. So I tend to check my MySpace once or twice a month, and use it to contact wrestlers.

“Personally, I am frustrated with people who feel the need to run fake accounts on any social network. There is no shortage of bad apples out there,” Dykens concluded.