Pride, confidence gives the Hart Dynasty a chance at success 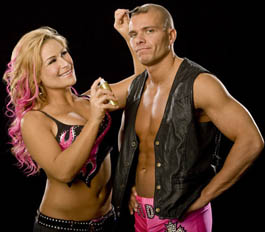 More and more it seems like second (and third) generation wrestlers are aiming for careers in professional wrestling. Randy Orton, Cody Rhodes, and Ted DiBiase Jr. are featured each Monday night. WWE training ground Florida Championship Wrestling’s roster includes Brett DiBiase, Bo & Duke Rotundo, Joe Hennig, and Wes Brisco. Others, like Reid Flair and Richie Steamboat are trying to get started at the independent level. But, it is the Hart Dynasty making its mark on Friday Night Smackdown.Natalya attends to Tyson Kidd’s hair in a WWE publicity shot.

Tyson Kidd, David Hart Smith, and Natalya Neidhart have been creating a buzz ever since they first appeared on ECW in May 2009. After a two-month stint in ECW that featured several long matches, the group was drafted to Smackdown. Usually it is Kidd and Smith appearing in tag matches with Natalya at ringside, but the trio has also competed in mixed tag matches.

Many of the elements that made the old Hart Foundation successful also apply to the new Hart Dynasty. The group’s wrestling gear is colored pink and black. The first few notes of the group’s entrance music come from Bret Hart’s music. Much like the powerful Jim Neidhart provided a contrast to the technical and athletic Bret Hart, David Hart Smith’s large physique compliments Tyson Kidd’s quick hitting, explosive offense.

Although not a second generation wrestler by blood, Tyson Kidd grew up close to the Hart Family. A native of Calgary, Kidd (real name T.J. Wilson) trained at the legendary Hart Dungeon before making his wrestling debut at the age of 15.

While his in-ring work has won the approval of fans and critics, Kidd’s unique hair style has drawn quite a reaction. A confident Kidd bragged to SLAM! Wrestling, “When you are this good you can do whatever you want. If anyone else can pull off this hair on a daily basis, I would like to see him.”

David Hart Smith, the son of “The British Bulldog” Davey Boy Smith, brings the muscle to the Hart Dynasty. Smith originally debuted on Monday Night Raw in the fall of 2007. His largely forgettable stint on Raw was stunted by a wellness policy violation in November of that year. After being sent to FCW to mature and develop as a wrestler, Smith joined Kidd and Natalya in ECW in May 2009.

Natalya is the daughter of Jim “The Anvil” Neidhart and the granddaughter of Stu Hart. She is proud to bring her special touch to the Hart Dynasty. “I give Tyson and David that feminine touch. It is an emotional industry. Women bring a little different touch. I will even add input on the costumes.”

Since the Hart Dynasty has began competition on WWE television, Natalya has spent less time in the ring as an active competitor and more time working outside the ring to support Kidd and Smith. “I feel great about (the role change). It is a nice change. Your body gets a break. Everybody wants to be stimulated and change it up. To be a centerpiece of this amazing trio and it is the biggest honor.”

It is a rare opportunity when wrestlers get the chance to work side by side with loved ones each day. Kidd, Smith, and Natalya all value the opportunity. A grateful Kidd added, “I have wrestled for a while and sometimes you are in a tag with someone and there is no chemistry or you don’t like the guy, but with the three of us there is none of that. We are so close. We stay on the same hotels in the road. It is unbelievable. We are living our dreams.”

The trio also embraces its role as the successor and protector of the Hart family wrestling legacy. While Kidd stated that they “represent the Hart Family” and have “Stampede style,” Natalya added, “What we are doing represents our roots and where we came from. We are carrying the torch for what my grandfather started.”

Bret “The Hitman” Hart and other wrestling minds in the family offer support and advice to the Hart Dynasty. Kidd revealed that Hart records all of their matches and communicates with the group each week, offering analysis and advice. While the advice is valuable, the trio’s desire to learn and improve has created a culture conducive to excellence. The greatest advice in the world is worthless if the recipient of the advice is too proud or arrogant to listen. Clearly, this does not apply to the Hart Dynasty.

Having a unique approach and bringing something new to the table are necessary ingredients for success in wrestling. There have been many imitations in wrestling that have fallen flat. While the Hart Dynasty respects and embraces the legacy of the Hart Family, it is their own skill set that gives them a chance to have great success.

Success is not a guarantee in sports or entertainment. Circumstance and timing can often dictate how far a performer can advance. It can be said that the Hart Dynasty has the right attitude and mindset to succeed. In some ways they are genetically pre-disposed to wrestling. They are humble, appreciate their opportunity, and are committed to doing everything in their power to be the best. With WWE trying to be a good corporate citizen, it need not look too far to find positive role models for young fans who are student athletes.