Memories of Bearman McKigney flood back after indy show 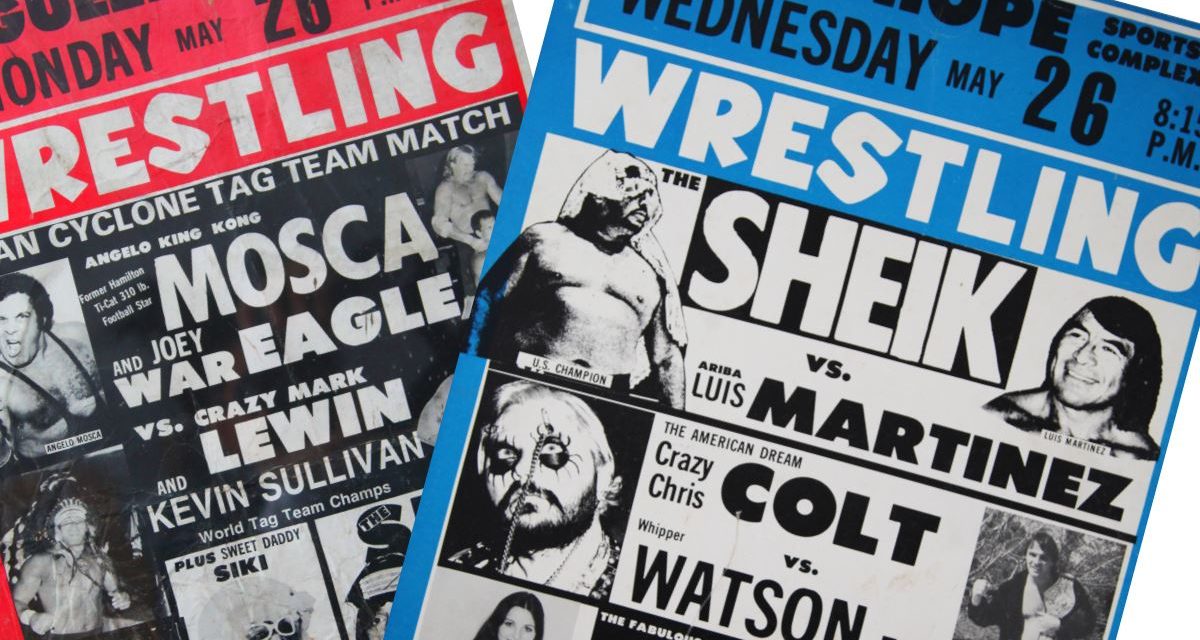 KESWICK, Ont. — The memories came flooding back to me Saturday night, as a special card put on by the Great North Wrestling Alliance honoured the one-of-a-kind Canadian wrestling character, Dave “The Bearman” McKigney.

The show, billed as the Battle for the Belt, was held at the Ice Palace in Keswick, about an hour north of Toronto. It featured a great many names unfamiliar to me, but intermission was a different story. 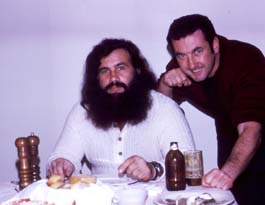 During the break, a special plaque celebrating the late Dave McKigney was presented to his stepson Conrad Gargus. This touching event was the McKigney Memorial. The plaque was presented to Conrad by three of the Bearman’s longtime friends, Duncan McTavish, Rolly Duguay and Mark Grier, who is the son of “The Wolfman” Willie Farkas, who was in Europe and could not attend.

To top it off, a veteran of the Bearman shows, Jet Star, was in the main event for the GNWA championship. (It was, after all, a show he was promoting.) The wrestlers involved in the over-the-top battle royal — Cezar, TNT, RJ City, George Terzis, Bill Skullion, Kobra Kai, Johnny Devine, Ruffy Silverstein, Rico Montana, Flatliners, and Chris Garvin — slammed and knocked each other from pillar to post. Star, the hometown star, was billed as Canadas’ King of the Cage. He received a rousing ovation from the fans, and in the end, it was Star and Bloody Bill Skullion waging a violent brawl with one another. Both wrestlers were bloody and battered as the match continued out on the concrete floor. Tables were broken and chairs cracked over the heads of the two huge men. Star was declared the winner after Skullion was ousted l5 minutes into the brawl. Jet Star held the prestigious belt aloft for all to see for a full five minutes. 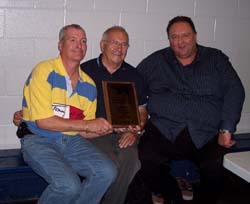 Alone with my thoughts later, having spent most of the day with Rolly Duguay, sharing McKigney and wrestling stores, I reflected on what the Bearman meant to me.

Back around l967, referee Joe Gollob travelled from Toronto to Peterborough, where Dave was promoting a show in town that evening. This was to be my first opportunity to meet Dave. Joe had told me that the Bearman had a very tough upbringing and was a wresting rebel of sorts. To my surprise, I found him to be very polite and mindful of those around him.

This first meeting would evolve into a friendship that lasted until his tragic road accident in Newfoundland on July 4, l988.

The memories of Dave are all priceless for me. A few that come to mind is when Dave ran a show in Newmarket and was calling anyone who wanted to come into the ring to tussle with Terrible Ted, the wrestling bear. I answered the call and climbed into that ring. Ted proceeded to toss me out onto the floor in under five minutes. 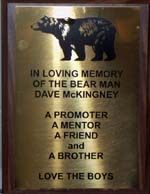 One winter night in l968, there was a loud banging at the back door of my fish store in Toronto. It was Dave. he had a new white Cadillac parked out back. “Dave, you must be doing well in the wrestling business!” I said. “Such a nice car!” For the next two hours, he spun wrestling tales as we downed a few cold ones together.

On a more sombre get together at my home, Dave, my wife and myself had a lobster dinner, During the course of the evening, he spilled his guts out to us about major grief he was having in his personal life.

I once interviewed Dave and his first wife for a major wrestling publication of that time. We talked for hours, just the three of us. Later, he showed me his log cabin which was on a ridge high above Mulock Drive in Newmarket, Ontario. My son, who was six years old at that time, got to pet Terrible Ted’s snout while he relaxed on his side in the pen Dave had built for him.

On another occasion, my family and myself were at another of Dave’s shows in Newmarket. He spotted me and said, “Roger, how about being my ringside announcer tonight?” Needless to say, I jumped at the opportunity. This night also marked my introduction to Angelo Mosca in the locker room.

There were other get togethers between us during those early years. However, the last time we saw one another Dave was at his log cabin home in the spring of l985. I drove up on a Sunday morning, unannounced, bringing with me a dozen bagels and a couple of pounds of smoked salmon — which was one of my specialties in the seafood business.

He was pleased to see me and introduced me to a couple of young aspiring wrestlers who were working out with weights on the front deck. We were both hungry and the smoked salmon and bagels didn’t last long.

The Bearman had a young bear out back named Gentle Ben. Dave asked me, “Roger, would you like to work out with the bear?” This was probably 20 years after I first wrestled with Terrible Ted. Gentle Ben and myself tussled for five minutes and I’m sure that a tear welled up in my eye afterward.

Dave led me down to an old barn that was full of wrestling posters. He ordered me to take as many as I wanted and after reminiscing after half an hour Dave said, “Roger, I’m sorry we have to leave early. We are doing a show in London, Ontario, tonight.” We shook hands and said our goodbyes. That was to be my last meeting with Dave. All of those wrestling posters that I took with me are still on my basement wall in my home. 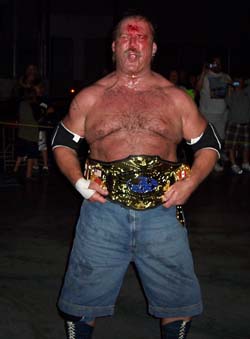 Jet Star is the new champ. Photo by Roger Baker