Maybe one of these days Daniel Puder, a blond-maned mixed martial arts powerhouse, will get a shot against Brock Lesnar or Fedor Emelianenko or Shane Carwin, and we’ll all see for ourselves if he really ranks with the biggest, baddest heavyweights on the planet.

For now, our mental images of Puder are stuck in a history warp and in pro wrestling’s fog machine, But sometimes it’s more fun that way. Puder is the guy who, almost five years ago, “hurt Kurt” — fate dropped him into the middle of a botched skit with Kurt Angle and the moment wound up defining his career. Go ahead, look it up on YouTube. Or, as the case may be, listen, my children, and you shall hear…. 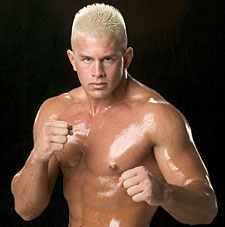 Puder, now 28, was a high school wrestling champion in the mat-mad San Jose, California, area. The South Bay also has produced Olympic gold medalists Mark and David Schultz. The best high school wrestler ever from San Jose, Dan Chaid, was a 1985 collegiate champ at Oklahoma who would lose to Angle in the finals of the 1996 Olympic Trials (after which Angle captured his own gold medal). Puder, in fact, trained with Chaid, and Puder says that fully prepared him for when Angle tried to bully him on SmackDown on October 4, 2004.

The background was that Puder was in the last stages of winning World Wrestling Entertainment’s Tough Enough reality-show contest. The eight finalists were flown in to serve as foils for WWE’s “A” team. There are hazing rituals, and then there’s pro wrestling, which is basically an endless series of overlaid hazing rituals. Puder’s own on-camera initiation included getting his back slammed against a locker by The Big Show.

The next week Kurt Angle ran the Tough Enoughers through squat drills, taunting them all the while and gassing everyone except Puder, who clearly won that segment of the competition.

The script called for Angle to take on all eight exhausted rookies, one by one, in the ring. In a piece of confusion, he started with the former college football player Chris Nawrocki, who was mistakenly identified as the squat drill winner. (WWE talent chief John Laurinaitis said “the blond guy,” and referee Jim Korderas pulled out Nawrocki.) In what was supposed to be a “worked” segment, Angle got a little too “ramped up,” as Paul Heyman puts it, and wound up stretching Nawrocki, who suffered three broken ribs.

When Angle turned to the other Tough Enoughers at ringside and asked if anyone else wanted a piece of him, Puder raised his hand.

I, personally, do not claim to be able to interpret what followed simply from viewing the YouTube footage; the only thing obvious to a wrestling layman is that Angle’s angle went sour. As is so often the case, the most accurate comprehensive interpretation seems to be that of Wrestling Observer publisher Dave Meltzer.

Angle later explained the humiliating scene by accusing Puder of a double-cross; Angle also said he was just coming back from a neck injury and was down to 210 pounds. For his part, Puder says he thought it was a shoot, especially after seeing what Angle did to Nawrocki. “I was really mad at Kurt,” Puder told SLAM! Wrestling, “and I was protecting myself.”

(Oddly, Nawrocki would express bitterness at losing to Puder in the Tough Enough fan voting, saying that “if the fans got to know Dan in the way the contestants got to know him, they’d realize he never watched wrestling in his life, kisses more ass than a toilet seat and has the personality of a robot.”)

It was a classic WWE mindfuck, and all over in a blink. Angle bulled Puder into the corner and against the ropes, but in so doing left himself vulnerable to a kimura armbar submission, which Puder calls the “keylock.” He held onto the hold from the bottom.

In Meltzer’s account, “Not only was Angle not getting out of the move, but most MMA fighters would have tapped already. Angle couldn’t tap for obvious reasons.” Ref Korderas counted a fast three even though Puder’s shoulders weren’t fully down, “because the reality was Angle would have been in surgery had it gone a few seconds longer or had Puder not given up the hold.”

After that incident, Puder won Tough Enough in a landslide. That rankled, in particular, fellow contestant Mike Mizanin (“The Miz”), whose dream was a WWE gig. Puder, not a fan of pro wrestling, had entered the competition at the last minute on a lark, at the suggestion of his girlfriend. WWE gave him a $250,000 one-year contract, with options, and sent him to developmental. The Tough Enough hype said it was a million-dollar deal, but only the first year was guaranteed.

Taking Puder under his wing, Heyman advised him to project his character by wearing a T-shirt emblazoned, “I Hurt Kurt.” In a conversation with SLAM! Wrestling, Heyman called the Angle confrontation an example of “being caught up in the whirlwind of the moment. There are no-lose situations, and then there’s this, a can’t-win situation. You’re in a clearly ‘worked’ environment where you think you know but you can’t be sure you know. So Daniel thinks he’s in a shoot and he hooks Kurt. It’s either get stretched yourself or overcome the odds.”

According to Heyman, Vince McMahon and his lieutenants watched Puder closely to see if he would come out of the incident cocky or humble. A naturally brash sort, he chose the former tack. You might think that’s precisely what the company wanted out of its talent. Wrong answer! Despite becoming the most “over” babyface in developmental, Puder was not elevated to the WWE roster. He turned down the company’s modest second-year offer and moved on to the next phase of his career in MMA. “But it was a great experience,” he said.

If there’s one skill Puder didn’t fully develop, it’s talking. He says Angle pissed him off and he’d still welcome a shoot fight with him. Tactfully, Puder doesn’t note the dark, downward trajectory of Angle’s life, which has included getting fired from WWE after refusing drug rehab, a real-life divorce that played out on TNA television and, most recently, an arrest for possessing growth hormone and stalking his girlfriend. Meanwhile, Puder (who also dabbled in Ring of Honor before turning for good to MMA) has moved his operations from San Jose’s American Kickboxing Academy to Southern California, fighting in such exotic venues as Hugh Hefner’s Playboy Mansion.

Paul Heyman, for one, never doubted that Puder had the right stuff for pro wrestling superstardom had the politics properly aligned.

“Are you kidding me?” Heyman said. “Daniel is 6-3. Great genetics, great look, good athletic ability, kicks like a mule. Has a smile so obnoxious he makes you want to punch the television screen. He’s Brad Pitt in Fight Club.”