CALGARY — It says a great deal about the current state of the WWE when after four years away, the biggest reactions at last night’s Monday Night RAW broadcast was for a 60-year-old wrestler long past his prime, and a local hero who wasn’t even in the building. 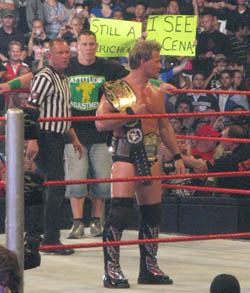 Chris Jericho pauses to check out the crowd at the Calgary RAW show Monday night as his opponent John Cena looks on. Photo by Jason Clevett

The loudest boos for the night were reserved for guest host Sergeant Slaughter, who used his American allegiance to generate cheap heat, first by berating Canada, then forcing the crowd to listen to Jillian Hall sing and then finally teasing an appearance of Bret Hart. Instead of Hart it was Hacksaw Jim Duggan marching out carrying an American flag. After the tease, “We want Bret!” was repeatedly chanted throughout the Saddledome. The reaction for Chris Jericho was incredibly loud, even after being caught badmouthing Calgary the fans were still torn between him and opponent John Cena in the main event.

With a four-year absence and all of the talk about what a great wrestling history Calgary has, you would think WWE would pull out something special for the fans that packed the Saddledome almost to the roof. Instead the show was filled with video packages, pretaped DX segments, and short fairly meaningless squash matches. The two hyped main events — Randy Orton vs. The Big Show and Chris Jericho vs. John Cena — both ended in non-finishes, a count out and disqualification, respectively. The results left the crowd flat. But hey, it leads to next week’s main event of Orton and Cena vs. Jericho and Show. Pay per view opponents having to team up a week before the show to face the tag team champions? The concept has been done to death and shows there is no creativity left.

From a wrestling standpoint it seemed that the best matches of the evening were both taped for Superstars. Carlito and Rosa Mendez defeated Kofi Kingston and Mickie James in a tag match while John Morrison pinned local boy David Hart Smith, who received a loud reaction from the hometown crowd. Unfortunately a ticketing issue resulted in a 30+ minute wait at will call and several fans grumbled about missing the match.

After the broadcast went off air, Cena praised Bret Hart, saying that he was a competitor who represented the best of the business, and in the interest of competition invited Randy Orton to the ring to shake his hand. Orton accepted and then attacked Cena from behind, only to be hit with the attitude adjustment. As seems to always be the case in Calgary, there was no dark match.

Overall the crowd seemed to enjoy itself, hungry for some wrestling after such a long time. Unfortunately the end result wasn’t worth the wait. WWE tapes Smackdown tonight at Rexall Place in Edmonton, with an announced match of John Morrison vs. C.M. Punk, a match that on paper looks better than anything on RAW.