When WWE announced the new Allied Powers: The World’s Greatest Tag Teams DVD, paying tribute to the greatest tag teams in the history of pro wrestling, I was intrigued to say the least.

After all, some of my favourite attractions to the semi-sport were, indeed, teams like The Rockers (Shawn Michaels and Marty Jannetty), The Hart Foundation (Bret Hart and Jim Neidhart) and The Killer Bees (B. Brian Blair and Jim Brunzell). Still today, I can honestly say that I follow the (limited) tag scene as closely, if not more, than the singles division.

So with that being said, you can imagine that I was going in to the DVD with high hopes, and in some respects my expectations were fulfilled, but cruelly left empty in others. 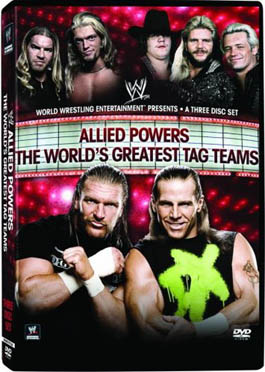 First up, I have to applaud WWE for their selection of John Morrison and The Miz as hosts of the DVD. Yes, Miz and Morrison are no longer a duo, victims of the Fed’s eternal plot to temporarily use teams to build singles stars rather than capitalize to the fullest extent on their ability to draw as a tandem, but at the time they were WWE’s hottest team and, arguably, the best of this century (skyward look and trumpet in the background).

Miz and Morrison are allowed to run wild here and do a good job of bringing their wit and wisdom from The Dirt Sheet to this DVD. I laughed out loud a couple times, mainly when they were ripping on teams like The Nasty Boys (Brian Knobs and Jerry Saggs) and The World’s Greatest Tag Team (Shelton Benjamin and Charlie Haas).

I also really liked the match selection. Sure, some bouts have appeared on other DVDs, but that’s expected with any WWE recording these days (seriously, try to find a compilation from the last two years that has totally unique match; I dare you). The time span is pretty impressive, ranging from a couple bouts within the last five years to a few from the “before times” of territorial promotions.

From here though, the childlike excitement slowly turns into a state of dismay.

Let’s start with the roster that WWE has churned out here. To their credit, WWE’s crew did a pretty damn good job in covering the best of the best. If you’ve been looking for footage, say, of The Fantastics (Bobby Fulton and Tommy Rogers), you’ll find it here. Same goes for Ricky Steamboat and Jay Youngblood. I was also happy to see that WWE could look past the Dudley Boyz’s current status and include them here, and that the vastly underrated La Resistance (René Dupre, Sylvain Grenier and Rob Conway) was also tributed.

Having said that though, there are some glaring omissions. First, almost anyone that was a tandem earlier than 1975 was omitted. That means that The Fabulous Kangaroos (Al Costello and Roy Heffernan), considered by historians to be one of the top duos of their time, weren’t here. No Duseks (Ernie, Emil, Rudy and Joe), no Sharpes (Ben and Mike), no Gallaghers (Doc and Mike). For modern fans, ECW was almost completely left out, which means no Gangstas (New Jack and Mustafa), no Impact Players (Lance Storm and Justin Credible), no Public Enemy (Johnny Grunge and Rocco Rock).

Further, there are some teams from the covered eras that weren’t included. All of Rick Martel’s successful duos were omitted — the Can-Am Connection (with Tom Zenk) and Strike Force (with Tito Santana), and his championship pairing with Tony Garea, as were a few of the various incarnations of the Samoan Family Tree, namely The Islanders, The Headshrinkers and the Faces of Fear. Also missing, very surprisingly, were Los Guerreros (don’t know how WWE missed these guys!) or any incarnation of the Guerrero family groups for that matter.

Some of these I could forgive; after all, Public Enemy really did not have much success outside of Philly and their table-breaking schtick was vastly improved upon by the Dudleyz (sorry Bob), and the success of The Islanders could be debated, but spots for teams of these could have been entered into the “honorable mentions” portion of the recording.

I also thought that WWE didn’t use the DVD to its full potential by not including a gag reel of bad tag teams. Similar segments had been on previous DVDs (namely the families compilation), and it would have been absolute comedy gold to have Miz and Morrison tear into some horrid teams like Los Conquistadores, Tekno Team 2000, The Blu Twins and The Ding Dongs.

But the biggest crime of the DVD is that there are no actual documentary portions. Rather than doing what WWE does best — present a short segment with commentary from various wrestlers and backstage folk — they simply run a 30-second to one-minute mash-up clipfest. This is horridly inexcusable, especially when you put the DVD side-by-side with the best of the ’80s or ’90s compilations, but perhaps not surprising when you consider that, despite the recent mini thrust, tag teams have been the low men and women on the WWE totem pole for the better part of this decade.

Luckily, fans do have a number of resources they can pick up to learn more about tandems, such as our own Greg Oliver and Steven Johnson’s book, The Pro Wrestling Hall of Fame: The Tag Teams, and I’d highly recommend getting you hands on such material, because in the end Allied Powers is more of a companion piece that illustrates tag team wrestling.

By all means, pick up this compilation for the matches, but to truly get an education and appreciation for tag team wrestling, don’t let this be your only purchase.