CHARLOTTE — Ah, reunited, and it feels so good.

That was the theme of North Carolina promoter Greg Price’s annual NWA Legends Fanfest, as the largest crowd since his maiden event in January 2004 attracted hundreds of fans last weekend to four days of wrestling nostalgia, including reunions of some of the top names in the sport.

“God, what a great night,” exclaimed Ric Flair, a hometown hero in Charlotte, who said the emotional atmosphere, particularly at a banquet honoring several legends, stacked up favorably to a WWE Hall of Fame ceremony.

Some fans paid more than $100 for a picture with Flair and his running partners in the Four Horsemen — Arn Anderson, Ole Anderson, Barry Windham, Tully Blanchard and manager J.J. Dillon. The fan event represented the first reunion of the two best-known editions of the Four Horsemen, and an autograph line in which they were featured lasted five hours to accommodate the stream of admirers.

Participants at the four-day festival included Mark Lewin, a 2009 inductee into the Pro Wrestling Hall of Fame in upstate New York, who made his first appearance at a fan-themed event in the United States. He was reunited with Kevin Sullivan and Sir Oliver Humperdink from 1980s-era Florida wrestling, where Lewin was the Purple Haze in Sullivan’s nefarious Army of Darkness.

Bobby Fulton and Tommy Rogers reprised their role as the Fantastics, a popular 1980s tag team, as did Dave Brown and Lance Russell, who sat side-by-side to call the action on Memphis, Tenn., TV wrestling for a generation.

But the honor for the most enduring and endearing reunion probably went to Jackie and Don Fargo (Don Kalt), the bleached blonds who stole the show from New York to Tennessee in the late 1950s and early 1960s as one of the most charismatic teams ever to don tights.

The two had not seen each other in about 25 years, and they had a tearful get-together before they were honored at the annual Hall of Heroes banquet with Jackie’s real-life brother, the late Sonny Fargo.

Then the Fargos were quickly back to where they started, with quips and rejoinders that had about 300 banquet attendees in an uproar. When Jackie broke into his famous Fargo strut, Don, now 81, joked, “You know why he bends over when he does that? It’s because he can’t straighten up.” 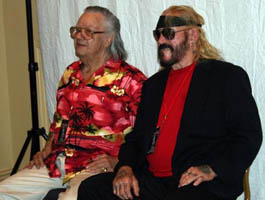 Jackie and Don Fargo, together again, at the Charlotte Fanfest. Photo by Steven Johnson

Jackie, who is 79 and lives just north of Charlotte, retorted: “I’m bent over because I was carrying you all that time.”

In a serious moment, though, Don acknowledged he had wrestled under 19 aliases during his 30-plus year career. “But the best one of them all was the Fargos.” Of Jackie and Sonny, he said: “They weren’t my real brothers, but they are my brothers.”

The Brown-Russell reunion brought back a bit of Memphis nostalgia, as Brown explained how he owes his career in TV — he’s still doing the weather on Channel 5 in Memphis nearly 40 years after he started calling matches — to Russell, a former TV executive in the city.

“It was fun all the way down the line,” said Russell, hailed by banquet emcee Jim Cornette as the “greatest wrestling announcer in history.”

Another inductee into the third Hall of Heroes class was Blackjack Mulligan, who recently suffered a stroke. His son, Barry Windham, a Horseman in good standing, accepted the honor, but not until Flair poured out his heart about Mulligan.

Mulligan told Flair had “had to be a man” as world champion, without the security of friends or promoters. “He was the kind of man you would want to be by your side. If you were going to Iraq or Afghanistan, you would want him by your side,” Flair said.

Horseman Tully Blanchard, presented the late Wahoo McDaniel for the hall, explaining that McDaniel was one of the most sincere wrestlers in the annals of the game. “Not everybody got over in every territory,” Blanchard said. “There were stars in some parts of the country that weren’t stars in other parts of the country. But Wahoo McDaniel was a star in every territory he wrestled in — every one.”

McDaniels’ son Zak, who is training in Florida to be a wrestler, could barely bring himself to talk about his dad, who died in 2002. “I’m tear-jerking … Just remember my dad, guys.”

“If Nelson was with us tonight, he’d want to wrestle. And knowing Nelson, he’d do it for nothing,” said Jones, who said he was honored to have worked as his teammate for four years. Royals’ daughter Shannon McCrary, recounted how her dad insisted she learn how to wrestle as the price for getting a valet outfit. “Oh, my gosh — that’s the sorest I’ve ever been,” she said. “My dad was the greatest wrestler in my eyes and he was just a wonderful, wonderful father.”

Jason Hart accepted the honors for his dad Gary, a manager and booker around the world, who died in 2008.

Russell and Brown reprised their roles in a Saturday forum on Memphis wrestling, hosted by Scott Bowden, a heel manager in Tennessee and author of the popular Kentucky Fried Rasslin’ column on the Internet.

Joined by legendary Tennessee promoter Jerry Jarrett, they walked fans through the angles and plots that made Memphis TV must-see broadcasts every Saturday morning.

“It was something we enjoyed doing,” Brown said. “It wasn’t something we had to do. We came to work on Saturday, which was our day off because we had fun and we enjoyed what we were doing.”

Jarrett said he campaigned for years to get a run with the NWA world title for Jerry Lawler, the hometown hero in Memphis and Jackie Fargo’s protégé. He got only as far as a 1974 title match against them-champ Jack Brisco, who won by disqualification after it appeared Lawler had emerged victorious.

The ending was unsatisfactory, but Jarrett told fans the year-long runup to the Brisco match was one of the highlights of his time as promoter. And when Florida promoter Eddie Graham, who groomed Brisco for the crown, stood by Jarrett as the match unfolded, the drama was unmistakable.

“That night was so emotional for me. It was like our two children were working for the world title,” Jarrett said.

The morning of Memphis memories has its lighter side, too. Jarrett credited manager Jimmy Hart, who also stopped by fanfest, with salvaging the Tennessee territory in 1980 after Lawler was sidelined with a broken leg.

That prompted Brown, who knew the hyperkinetic manager from the Memphis music world, to offer perhaps the crack of the day:

“He had all his blood removed back around 1980 and he had it all replaced with Red Bull.”