Mat Matters: Flair-Hart comments damage the legacy of both

I’m not sure what reaction Ric Flair was intending to induce when he recently appeared on wrestling radio show The Law. When asked about Bret Hart, Flair said: “(Bret Hart) is a piss-ant in the history of wrestling. He has the nerve to compare himself to me?! Let’s get realistic. If you put Bret Hart in your left hand and me in your right hand, compare the career — who is he? 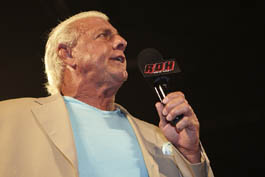 Ric Flair at the Ring of Honor show Saturday night in Toronto. Photo by Andrea Kellaway

“He is a legend in his own mind,” Flair added. “He lives in his own little world. He screws his own family around. Who is Bret Hart?”

Though those latter comments are deeply personal, the words re-opened old professional wounds that trace as far back as 1992, in the weeks and months that followed Hart’s WWF Title win on October 12 at Saskatchewan Place in Saskatoon. Particularly in the re-matches after Hart won the title, the new champion was concerned that Flair was doing his best to make him look bad. It was an issue that eventually forced Hart to seek advice from Vince McMahon.

“With Flair, going into the match where I won the belt, we had toured Germany and he was always the champion and I was always the challenger,” Hart told me in 2006. “Flair and I had pretty good matches, by Flair’s standards anyway, but on the day that I won the belt, and from that point on, we starting having really shitty matches. He sort of, accidentally-on-purpose, began screwing up the matches, getting the endings wrong.

“I found that this was happening consistently, and I ended up going to Vince McMahon and telling him that Flair was sabotaging the matches, maybe because Flair knew he was going back to WCW. They ended up calling us together to try and sort it out, and I remember him confessing to me that he was having problems with his wife, at home, that he was distracted, and he apologized for not being able to give me the matches that we had had before. You know, I think Ric was a bit of a swerver in there. He was not always with you in the matches.”

While I could print a further few dozen paragraphs of barbed quotes going back and forth, that is not the intention of this column. Nor is it to say who is right or wrong, who was better, or anything of that nature. Clearly, when it comes to their professional abilities at least, it’s a subjective matter. 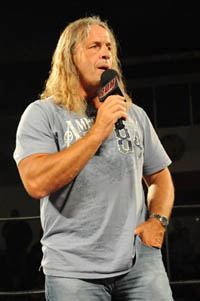 To stick with Flair, since it is he who has caused the latest controversy, I wonder what he thinks he gained by making the comments. Possibly, he thinks that he has kept himself in the wrestling spotlight, with more exposure for employment opportunities at a time when his agent has reportedly been contacting businesses with details of Flair’s availability. Perhaps it is because he truly believes that he was leagues ahead of Hart as a performer, and wanted to reinforce that idea when he had the occasion. He may also simply have enjoyed having a pop at someone whom he doesn’t particularly care for.

But every time that either man behaves in such an intolerant way — Hart’s baffling run-ins with SLAM! Wrestling’s Greg Oliver may even surpass any of Flair’s rants — towards each other or otherwise, a fraction of the legacy that they spent their careers building, is chipped away. Not because their words can change the history of the great moments that they were involved with, but because a little humility regarding their achievements — or, perhaps more in this case, a respect for the work of others — goes a long way to them being remembered fondly in the eyes of the fans.

Quite naturally, wrestling fans want to be able to hold a healthy respect for the performers they enjoyed watching, just as any other sports fan would. Consider the idea that Wayne Gretzky would bash Mario Lemieux in the same manner that Flair has spoken of Hart. While some people would no doubt agree with Gretzky, he would also lose the section of his fans who were also fans of Lemieux, or who didn’t care for his sniping. With Flair and Hart, the wrestling business complicates the issue, because we’re dealing with people who have been taught the need to stand out from the crowd, but the bickering between them makes it appear that both are bitter about the success of the other.

It was the playwright Wilson Mizner who wrote: “Don’t talk about yourself; it will be done when you leave.” The more that Flair and Hart continue to speak of the other in these derogatory terms, the less conversation will centre around both of their marvelous careers.