The progression of Chris Hero continues

For Ring of Honor star Chris Hero, the first seven months of 2009 have been a steady state of progression. He’s confident that this weekend, when he squares off against Lance Storm at the company’s two shows in Toronto’s Ted Reeve Arena, that trend will continue.

“Things have been fantastic,” he told SLAM! Wrestling earlier this week. “The first half of 2009 has been really amazing.”

A lot of that had to do with his experiences in Japan, where Hero (real name Chris Spradlin) toured with Pro Wrestling NOAH earlier this year. 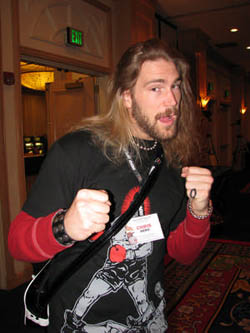 “It was the best tour I could possibly imagine,” he recalled. “This was my third tour with them. Up until that point, everything I’d been doing was pretty much tags or six-mans. This time, they really gave me the opportunity to break out and prove myself. On the first night of the tour, they put me against Go Shiozaki. I got to wrestle Yoshihiro Takiyama who is the All Japan Triple Crown champion, I got to work with Kensuke and Morishima in some tag matches, and finished it off with the opening singles match in the last show of the tour.”

In addition to appearing on the shows, he was able to dedicate time to training, both physically and mentally while there.

“I was given the opportunity to train at the company’s dojo,” he beamed. “(At the dojo), it was just a mixture of focusing at the dojo, getting up at 9 a.m. every day and going through the routines. Between training in the ring and training at the gym, I got into the best shape of my life. When I wasn’t training, I spent a lot of time working on my Japanese to the point that I can now read and write two of the alphabets. I was working on it every day.”

One significant event that happened while he was there was the death of Japanese legend Mitsuharu Misawa, who died in an in-ring accident in June. It was a particularly hard moment for Hero who, since becoming a heavy fan of Japanese wrestling in 2002, had heavily followed Misawa’s career.

“My favourite Japanese wrestler was Toshiaki Kawada who, if you follow Japanese wrestling, you know that he and Misawa were rivals for the longest time. The amount of matches that I’ve seen between those two and from All Japan from that era was such a huge influence on me.”

“I saw everything with my own eyes,” he said somberly, in stark contrast to his normally upbeat demeanour. “It was very surreal being there. I’ve never seen anything like that before in my life, never experienced anything like that. Being there in a foreign country made it even more disorienting.”

“In a strange way, it’s hard to explain, but (it was somehow easier) to be there. As opposed to just hearing about it, or having somebody tell me, or getting a text, or by reading about it on a message board. I think that it was easier to (cope) being there for it and grieving along with the other wrestlers and his friends and family, as opposed to doing it from afar.”

Though his time in Japan was ultimately bittersweet, on the domestic front, it’s been nothing but positive, particularly as it pertains to his progress within ROH.

“In 2009, I’ve got to be more prominently featured,” he said proudly. “I had a singles match with Tyler Black, and a singles match with Jerry Lynn in Boston. My character is evolving. The stuff that I’ve been doing and the stuff that I’ve been trying to get over with the fans has been getting over. I’ve been getting more interview time. That really helped rejuvenate me, and motivate me to keep going.”

Now that he’s reached a higher level, Hero is quick to point out that doesn’t mean he can simply rest on his laurels or become complacent. On the contrary, he is constantly modifying and tweaking parts of himself to enhance his in-ring persona.

“It’s a combination of everything,” he explained. “(You have to) keep switching things up. For example, I switched up my ring gear — I started working in just a pair of trunks and a singlet. I got new ring music. There’s a rapper in New Jersey called Viro the Virus. I watched him perform at a show last year. He wrote an awesome song for me that’s now my entrance music. So that’s nice and fresh. Every six months, I try to change some of my move-sets, get rid of some things and try some new things.”

To that end, Ring of Honor is very supportive in terms of giving their roster the flexibility to experiment and adapt themselves.

“Oh, definitely, Ring of Honor is a very good environment as far as that goes,” he attested. “I’ve been given the freedom since day one to do my thing. Of course, if there was something that was a little extreme, then out of respect and decency, I’d mention it. But the fact that we come up with ideas is (seen as) very important. This isn’t WWE where we have writers script our promos for us. We’re given an objective, and it’s really up to us the route that we want to take the fans on. We have to be more proactive.”

And if that means that an evolution of a character will take some time, if it’s a good idea, ROH is patient with it and will generally let it unfold over some time, as opposed to some companies who will start a feud out of nowhere and burn it out over a very short period. A prime example of this is Hero’s feud with Lance Storm, that started out a year ago at the company’s Toronto debut show and is only culminating this weekend. Last year, Storm got into a verbal spar with Hero’s then-manager Larry Sweeney. When Hero came in to save Sweeney, Storm promptly rolled up Hero and locked him into his Canadian Maple Leaf (“Maybe that’s best called a Half Crab,” joked Hero, “since Canadian Maple Leaf sounds a bit too goofy”). The matter heated up further later that fall in Detroit when Hero, living up to his moniker ‘That Young Knockout Kid’ turned out Storm’s lights with a roaring elbow. This weekend, Storm will get his chance for retribution twice — on Friday, he teams up with Kevin Steen to take on Hero and his partner Davey Richards, and on Saturday, Storm and Hero will finally square off one on one.

As Storm had all but retired from in-ring action over a year ago, it’s amazing that fans will get to see him wrestle at all, much less to deliver on a feud for which seeds were planted a year ago.

“He really enjoys wrestling,” Hero said about his opponent, “and he wanted to leave something with his appearance. Who knows, maybe he’s still got a little burn inside of him that he wants to come back. But if he didn’t come back, well that was fine too,” he laughed, “because I knocked him out.

“Seriously, to me, it’s a great opportunity and it’s a privilege. He hasn’t wrestled for a year and a half, and I get to wrestle him two nights in a row.”

While it could be a daunting experience to step into a ring with someone who hasn’t been wrestling regularly, in front of a crowd that will demand high expectations, Hero isn’t fazed by the pressure. First, because he believes that Storm will be more than capable of delivering a great match. And second, because Hero simply won’t accept giving anything less than his best.

“As far as I know, Lance doesn’t have anything major going on right now except his school and his family life, so I know that he’s been training really hard for this. He’s always been a gym junkie and has always tried to be in the best shape possible, so I’m sure that he’s put a lot of pressure on himself, especially in a singles match, to come in in incredible shape.”

“As for me, I can’t think about any possible negative outcome, because that just won’t do me any good. I’ll probably be a bit nervous, but that just means that I care about what I’m doing. When you really enjoy something and want it to go well, you’re always going to have a bit of nerves. But I’m not worried.”

To say that he simply enjoys wrestling might actually be an understatement. Making regular appearances in Japan, ROH, as well as other promotions like CHIKARA, Pro Wrestling Guerrilla, recently debuting in Full Impact Pro, and planned future trips to Mexico (the Swine Flu epidemic scuppered his plans to go there earlier this year), his own personal training, and training others, it’s hard to imagine that he has time for anything else.

“I do have a life outside of wrestling,” he insisted, “but I’m just so fortunate to have such a passion for wrestling that anything I do wrestling-related does not seem like work to me. I can focus on it like it’s a really strong hobby of mine, but am lucky to be able to make a living off of it too. It’s been a full-time thing for me for the past decade, and I’m excited about what’s coming next for me, especially this weekend. I think everybody is going to like what I have in store for them — it’s the progression of Chris Hero.”