WWE Divas’ Champion Maryse Ouellet is ready to finally step into the ring and put her title on the line against her nemesis Mickie James at Night of Champions.

“Mickie James was the Women’s Champion four times and she’s really known to be one of the best wrestlers. I can’t believe it; I just think about it, I used to watch her on TV and now I’m competing against her. So it’s just incredible when you think about it,” the Montreal native told SLAM! Wrestling on Thursday. 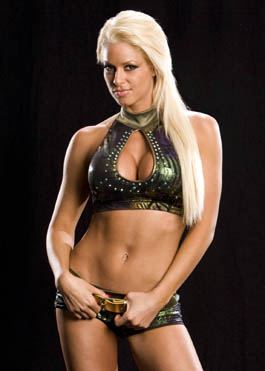 Ouellet has been one of the fastest rising stars in WWE — she only began training in the summer of 2006 and by December 2008, defeated Michelle McCool for the Divas’ belt.

“I’m pretty happy to defend my title this Sunday, pretty excited about it,” she said before reverting into heel mode. “A lot of people say that I’m scared of Mickie James and I am running and hiding and trying to avoid her. It’s not true and I don’t know why those rumours are all over the papers, the Internet, everywhere. It’s pretty funny. I know that she is very good, I know that she was the champion four times, that she defended her title against Lita, Trish Stratus, those big names in the Women’s Division. It’s fine. I think it’ll be a pretty interesting night. If you had watched Monday Night Raw the past two weeks, I was the one who won. And I must be better because I’m the Divas’ Champion for eight months. That means something.”

Ouellet added that she believes McCool’s Women’s title would look good on her as well.

“Michelle McCool is my all-time number one fan. She, from the beginning, wanted to be me, copying me, did everything to be like me. But I don’t blame her — she’s not the first one, probably not the last one,” she said and later added: “If I wasn’t me I would want to be.”

In spite of her dastardly ways, Ouellet recently won a SLAM! Wrestling poll that asked readers to pick their favourite Canadian Diva or Knockout, garnering 27% of the vote. Second place went to Gail Kim with 21%.

“I’m pretty surprised, because being French Canadian, I feel like I’m from a different country, so (that) and being a heel, that’s kind of cool and I’m flattered about that. It’s really nice,” she said. “I would say I’m pretty different from all the other girls. I’ve heard that I have a lot of sex appeal and that’s really something I try to use when I get on stage. Well, you don’t really try — it’s something you have or you don’t have. But I guess I must have it and a lot of men gotta love that!” 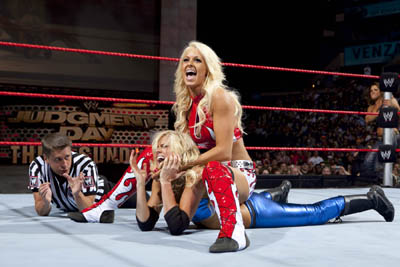 It would be safe to say Ouellet knows more than a fair bit about sex appeal, seeing as how she has modelled, won bikini contests, and graced the pages of Playboy. But there is another side to her as well, one that grew bored with a career of posing and sought out a greater challenge.

In the summer of 2006, she tried out for the WWE’s Diva Search, despite knowing only a few words of English. Although Layla El eventually won the contest, WWE still showed an interest in Ouellet and wound up signing her to a development deal in late August of that year. She spent a year-and-a-half in WWE’s development territories, where she underwent a lot of physical and mental exertion. But her efforts have paid off.

“Working for WWE is like being a rock star, a movie star, and a professional athlete all together. I love the scene, I love performing in front of 20,000 people, it gives me this amazing adrenaline rush. It’s just crazy. You’ve got to do it to understand.”

Her goal is simply to enjoy each day as it comes.

“Five years ago, I would never believe I’m doing what I’m doing right now. So I’m trying to get the maximum of every day that I’m travelling the world, working with amazing people. I’m pretty happy right now.”