Doors continue to open for Nunzio

As the old saying goes: when a door closes, a window opens.

And for James Maritato (more commonly known as Nunzio or Little Guido), the saying couldn’t be any more accurate.

Maritato has enjoyed an almost 20-year career that has taken him around the world, under numerous monikers and through the use of different skills. 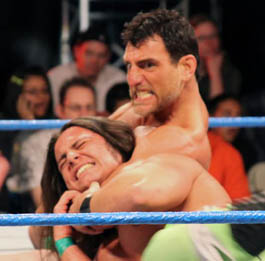 Nunzio twists an opponent’s head at an NWA TV taping in Los Angeles in March 2009. Photo by R.P. Strickland, strickspix@yahoo.com

It all began for the former high school wrestler when he began to train as a pro in the Northeast. There he wrestled on various indy shows as Damien Stone before a call came into his wrestling school advising that there would by a tryout for the Japanese shoot fighting group UWFI.

“I didn’t even know what shoot fighting was, but when I went there, I had the amateur background to go with these guys,” Maritato told SLAM! Wrestling.

Before he knew it, Maritato was training in Tennessee under the tutelage of Billy Robinson, Lou Thesz and Danny Hodge and learning the shoot holds that were previously unfamiliar to him.

“When I went there and they were doing the submissions, I hung in there and I kept going back there every day and I stuck it out,” said Maritato. “When it was time to go home, they said they wanted me to stay.”

Maritato competed for the UWFI for four years until the promotion ceased operations. This led him back to the United States, where he capitalized on previous contacts such as Taz and Tommy Dreamer, who put him in touch with Paul Heyman and an opportunity with the growing ECW.

Under his previous ring name Damien Stone and his real name, Maritato made enough of an impression that he was repackaged as Little Guido and paired with JT Smith, who was doing a gimmick where he believed that he was Italian. Thus, the Full Blooded Italians stable was born.

Maritato never thought the FBI would last as long as it did, basically following him through his entire ECW tenure and even into WWE, in varying forms.

The original FBI grew from two to four with the additions of Tracey Smothers and Tommy Rich, making Maritato the only real Italian in the comedic quartet. Maritato would go on to win the ECW Tag Titles twice, once with Smothers in 1997 and again with Tony Mamaluke in 2000.

“It’s always a good feeling when the promotion gives you the responsibility of having the belts and carrying them,” said Maritato. “It was fun when we had them. It was a good feeling, like a payoff.”

Between title reigns, Maritato also established himself as a force in the TV Title chase, regularly battling the likes of Yoshihiro Tajiri and Super Crazy in a series of memorable three-way dance matches.

“The whole series I did with Tajiri and Super Crazy was awesome,” Maritato said. “We did that for about two years, the three-way dances and singles and tournaments and all kinds of stuff. I had some of the best matches of my life [with them].”

ECW, however, was more than just a place to wrestle for Maritato. He was also heavily involved in the promotion’s merchandising with Dreamer and D-Von Dudley.

“[ECW] was also my job during the week, too,” said Maritato. “It wasn’t like I was just losing the wrestling. It was a full-time job for mostly everybody, but it was different for me because that was in my house.”

After the closure of ECW, Maritato became lost in the shuffle of talent leaving both WCW and ECW for the few jobs that remained available in WWE.

A year and a half after ECW staged their last show and while wrestling on the indy scene and working occasional dark matches for WWE, Maritato finally got the call from WWE brass.

“I had to wait for a lot of things to get weeded out,” he said. “I never expected [to be signed], but I was always hoping.”

With the move to WWE came a name change from Little Guido to Nunzio. He doesn’t know who came up with the new handle, but Maritato wasn’t about to fuss over the alteration.

Maritato debuted in December 2002, as Jamie Noble’s cousin and although the pairing did not last long, it was a dream come true for the longtime wrestling fan.

“You’re not in the pro wrestling business because you had nothing to do one day and you fell into it,” said Maritato. “For me, I was a longtime fan and I watched it for years. I used to go down to Madison Square Garden as a kid. If you play football in high school, you want to go to college and work your way up to the NFL, so I think it would be mostly anybody’s dream if you want to be a pro wrestler.”

Among Maritato’s many memories from his WWE stint, are his appearances at Madison Square Garden — where he watched WrestleMania I as a young fan — including participating in the WrestleMania XX Cruiserweight Open battle royal.

Tours of Italy were also a highlight for Maritato where he was beloved by the fans thanks to his heritage and gimmick.

“It was cool just having those fans and they’re really behind you because I did the Italian thing,” he said. “They were really good with me and accepted me.”

Now that Maritato has moved on from WWE, he’s back to touring the indy scene and promotions outside of North America and has gone into training wrestlers, looking to pass on all the years of guidance he was privy to.

“I haven’t run my course yet,” said Maritato. “There’s something else out there for me.”

When the next door closes for Maritato, another opportunity and window will surely open for the Sicilian Shooter and he’ll be sure to make the best of it.

Daniel Wilson lacks any Italian heritage, but given the lax criteria for membership in the original rendition of the faction, he considers himself a full-fledged member.