WATERLOO, Iowa – Although Friday started out with strong storms in the Waterloo area, the rain couldn’t dampen the spirits of the many wrestlers and fans that converged there this weekend for the annual George Tragos/Lou Thesz Professional Wrestling Hall of Fame stories inductions. Near-tornado like winds brought down many tree limbs, causing the cancellation of the celebrity golf tournament. Most people didn’t seem to mind, however, as the introductions went on as planned, and participants enjoyed an early steak dinner and conversation inside.

On Friday evening, Harley Race’s World League Wrestling group put on another fine card. For many, the highlights of the evening were watching the second and third-generation wrestlers, Ricky Steamboat Jr. and Amy Hennig. Grandpa Larry Hennig was especially proud as he watched his granddaughter win the Women’s title match. In addition to Race and Hennig, many other wrestling legends were in attendance, taking time to pose for pictures and sign autographs for fans. Legends included Nick Bockwinkel, Danny Hodge, Baron von Raschke, Mad Dog Vachon, Bob Geigel, Tom Andrews, Bob Roop, and Percival A. Friend. 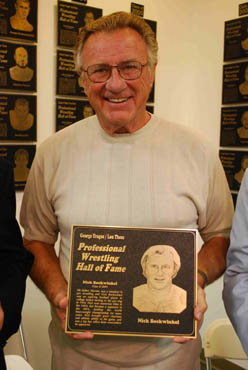 On Saturday, fans and wrestlers alike gathered at the newly restored wrestling museum to watch the 2009 Class of inductees receive their awards. Other than the pictures in the lobby, there were few traces left of the flood damage from last year. The daytime induction ceremonies at the museum were a shorter version of the ones to come that evening at the banquet at the Sullivan Brothers Center.

This year’s Jim Melby Writing Award went to Mike Mooneyham of South Carolina. Mooneyham started writing about wrestling as a teenager and has been writing a weekly wrestling column for his South Carolina newspaper, The Post and Courier, since the late 1970s. Mooneyham noted that he found this award particularly satisfying since early on his parents had often asked him where his wrestling writing would lead him.

Bill Kersten of Kansas City was presented with the Lou Thesz Award. Kersten started out as a fan and an usher and was ultimately given a chance to try ring announcing, which led to a career. The list of wrestlers he has introduced to fans over the years reads like a complete who’s who of wrestling.

Ivan Koloff was selected as the Frank Gotch Award winner, for his charity and ministerial work after his long wrestling career. Unfortunately, Ivan was not able to be there to receive the award in person.

The 2009 Class of Hall of Fame inductees included deceased wrestlers Luther Lindsay, Karl Gotch and Bronko Nagurski. Nagurski’s son Tony was there to receive his father’s award and noted that the award would be prominently displayed at the Bronko Nagurski museum in International Falls, Minnesota. Nagurski related many interesting stories from his father’s long wrestling and football careers. 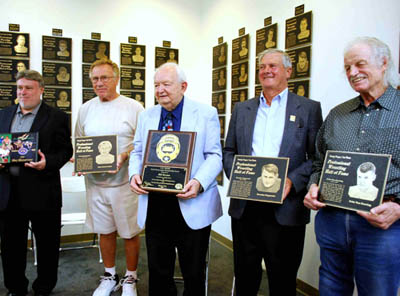 The living recipients for the 2009 Hall of Fame included Fritz Von Goering, Ricky Steamboat and Nick Bockwinkel. Due to scheduling conflicts, Steamboat was not able to be present at this year’s event either.

Selections and preparations are already underway for the 2010 event, again scheduled for the second weekend of July. 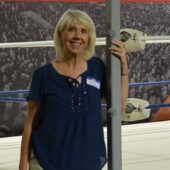