The New Generation, Attitude Era and Monday Night Wars all wrapped into one. Yes the 1990’s provided some of the most memorable moments in wrestling history. The question is whether the WWE’s newest DVD release, Greatest Stars of the ’90s, can live up to the hype of this spectacular decade.

This three DVD set is broken up by having the first disc as a mini biography on several of the top Superstars from the ’90s, and is hosted by Tazz. The other two discs are all matches. No frills or interruptions, only action; and wow does this compilation ever deliver.

As was the case with the ’80s compilation [’80s DVD falls short of expectations], the stories of the wrestlers’ careers focuses on what they did in the ’90s with insight from various wrestlers. The cool part here is the use of CM Punk, who was, for the most part, a fan and not a performer during this era. We don’t get any earth-shattering news from the bios, but they do a good enough job of telling the story of the grappler without making it boring. 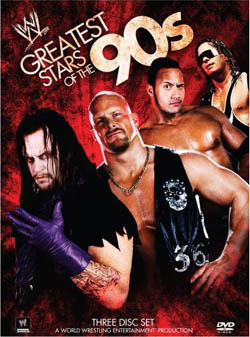 As one would expect, the roster profiles some of the usual suspects. Cover boys Undertaker, Steve Austin, The Rock and Bret Hart are joined by the likes of Kevin Nash, Lex Luger, Sting and Triple H. We also get glimpses of ’80s holdovers like Ric Flair and Hulk Hogan, who unquestionably were still big names in the ’90s. Additionally, there are a couple surprise inclusions such as Yokozuna, who WWE has always had this odd appreciation for despite his limited shelf life as a top name.

Of course, much like the ’80s predecessor, there are some, okay let’s just say it, extremely odd exclusions. Outside of Austin and Mick Foley, there are no ECW superstars on here. Outside of Paul Heyman, who gets a nod as a promoter, no real focus is given to the land of extreme. Say what you want about national exposure, but Taz and Raven certainly would make most fan lists, as would Sandman, Rob Van Dam, Shane Douglas and possibly Tommy Dreamer. Heck, Terry Funk could probably be in here as well and not get any odd looks.

But perhaps the most interesting exclusion is that of one of WWE’s most solid performers throughout the ’90s — Davey Boy Smith. The Bulldog was a multi-time IC and tag team champ, had arguably one of the best matches of the decade (vs. Bret Hart at Summerslam ’92) and was simply one of the most well-liked superstars in the 10-year period. Also criminally missing is Goldberg who, despite being in WCW for only a short time, was one of the biggest pure impact grapplers in the boom period that was the latter part of the decade.

Other MIAs of note include the Legion of Doom, Diamond Dallas Page and Bam Bam Bigelow.

The interesting fact about this collection compared to other World Wrestling Entertainment offerings is the originality of matches chosen. There are not any glaring repeats as seen in many WWE anthologies and this set could easily be considered in the top wrestling DVDs of the past ten years. The only real exception is Bret Hart versus Owen Hart at WrestleMania X that can be seen on Bret’s three-disc set and, of course, on any Mania compilation.

Bravo to the company’s home video division for digging into the archives and pulling out some seldom seen battles from well known rivalries. This is where the DVDs really separate themselves from the others as contests from the old In Your House pay-per-views and lower profile events bring back fond forgotten memories. The very first match up is a perfect example of this as Hulk Hogan takes on Ric Flair at a 1991 house show in Madison Square Garden.

Diesel versus Razor Ramon for Intercontinental gold on an episode of Superstars or Owen Hart against Shawn Michaels in a #1 Contender Match are real gems that have not been added on any other WWE release. An extremely unique addition, although not an epic encounter, is a Women’s Championship match between Alundra Blaze and Bull Nakano from a 1995 episode of Raw. British Bulldog and Yokozuna also make appearances, as well as Vader from both his WCW and WWE days.

Now there are definitely a few areas for improvement. For starters there is no ECW! A classic match with Tazz or Rob Van Dam could have been thrown on to represent the cult following that the original Extreme Championship Wrestling had. Also, the matches all run together and a comment here or there from a participant in the actual contest would have been a nice touch to break up the flow.

With only three WCW matches in the compilation one would think that a better choice than the average Bret Hart vs. Sting encounter at Halloween Havoc 1998 could have been picked. However, the selection is understandable because of the two names involved and a rare Hollywood Hogan taking on Lex Luger title fight makes up for the previous oversight.

There are two Easter Eggs included on disc one as an added bonus. Click right twice on ‘Women of the 90’s’ and Sunny’s television warning is shown. The second hidden item can be found by clicking right twice on ‘Stone Cold Steve Austin’ and this has Road Warrior Animal discussing the time his son received a Stunner from Austin.

Overall, the matches included in Greatest Stars of the ’90s are stellar.

Diesel & Shawn Michaels vs. Yokozuna & British Bulldog: All Titles On The Line Match, In Your House – September 24, 1995

Owen Hart vs. Shawn Michaels: #1 Contender for WWE Championship, In Your House – February 18, 1996