Unlike any other moment in the history of professional wrestling, everyone, from hardcore WWE fans to the most casual viewer, would tune into radio shows, click onto websites or, eventually, turn on television reports that spanned news channels, sports stations and almost everything in between. 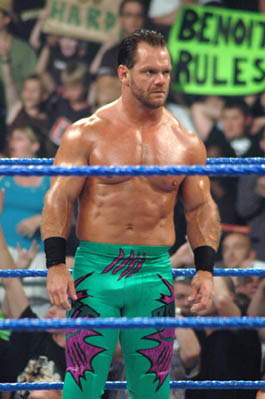 Chris Benoit in May 2007. Photo by Mike Mastrandrea

It was this day that is listed as the day Chris Benoit killed himself, after murdering his wife Nancy and son Daniel.

So much has been talked about, and undeniably will continue to be discussed about this unfathomable tragedy. It’s still unclear as to why everything happened that fateful weekend in 2007, when the entire wrestling community was changed forever.

It’s still difficult for most of us to talk about. WWE, rightly or wrongly, for the most part has kept Benoit’s name and image out of broadcasts, DVD releases and shows on 24/7, and debates rage on about honours that had previously been bestowed on the man once known worldwide as The Crippler.

For me, like many of you out there, it’s an unfortunately hard thing to digest today. Benoit, probably more than any wrestler in the 25 or so years that I’ve been watching wrestling, was my favourite. His technical work in the ring was unparalleled and he had this uncanny ability to tell a story in the ring. His many classic battles with the likes of Kurt Angle, Steve Austin and Chris Jericho are timeless classics.

Yet many will never be seen again.

Even two years later, my copy of his bio DVD remains hidden away. Even his Super J Cup matches have been unwatchable because of the images they conjure up in my head. Heck, even playing Smackdown vs. Raw 2006 is uncomfortable at times.

I’ve shared this story before with many of you, but it’s worth retelling. At one point, I was scheduled to not only meet my hero, but to interview him for SLAM! Wrestling. At one point during my studies at Ryerson, Benoit was doing an autograph session at the Sun building in Toronto. I was scheduled to do the interview immediately following the session and raced down to be there for the last half hour or so to get there in time to speak with him.

By the time I arrived, it was too late. I met John Powell outside and he gave me the bad news, that Benoit had cut the session short and I wasn’t going to get my interview. He was going to work out instead. I caught a slight glimpse as he loaded into a car and took off. I was devastated that day and admittedly was more than angry at Benoit and WWE for the snub.

Now, so many years later, I’m almost glad I didn’t get the interview. Had I done so, it would be unreadable for me today.

So I, like so many of you, now stand at a crossroads in my viewership of pro wrestling. I so dearly wish that I could watch those unforgettable matches again, but I just can’t. As much as I don’t believe in WWE’s policy to keep Benoit erased from the record books and out of DVDs (especially in the upcoming Best of Smackdown compilation where he had so many classic bouts), I certainly can understand why they don’t — the uncomfortable feeling I have must be double, triple, quadruple or more in size for the staff and talent who not only got to speak with Chris, but worked with him on a daily basis.

Hopefully, when I sit down to write my next column on the anniversary of the single greatest tragedy in pro wrestling history, I will be able to say that I do so after watching a Chris Benoit match. Until that time comes though, all I can do is hope; hope that, for even a few minutes, I can put aside the feeling in my stomach of a mixture of anger and sorrow, and enjoy watching Benoit do what entertained me for so many years beforehand — be one of the unquestioned greats this form of entertainment has ever seen.

Indeed, all I can do is hope.