When I first heard about that WWE Home Video was releasing a DVD set honouring the stars of the 1980s, I was very stoked.

As a kid who grew up watching Superstars of Wrestling, Wrestling Challenge and Saturday Night’s Main Event, I was anxious to relive the moments that left an indelible mark on my childhood. 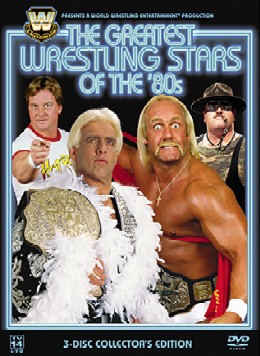 Unfortunately, I was very disappointed by what WWE had put together.

The DVD, The Greatest Wrestling Stars of the ’80s, highlights 15 superstars and personalities, concentrating (but not limiting) to the “decade of decadence.” Each of the 15 stars gets a biography in the main portion of this three-disc set. These bios are okay, but if you have followed WWE at all in the last five years, you’ll find that a lot of the material is not exactly fresh.

For the bios, WWE borrowed heavily from Confidential broadcasts and Hall of Fame induction ceremonies. There really isn’t a lot of material that is new here, and that doesn’t come as a surprise when you consider that the vast majority of the wrestlers featured are in WWE’s hallowed halls already. Of the five non-inductees (Jerry Lawler, Ricky Steamboat, Arn Anderson, Ric Flair and Dusty Rhodes), only one is not a WWE employee. In particular, Anderson’s bio was lifted cleanly from Confidential, and it’s beyond logic as to why WWE could not have shot some new material. The bios are overly simplistic and leave huge gaping holes in the wrestler resumes, like Rhodes’ time in the WWF with the polkadots is never mentioned.

The matches and extras on the DVD are pretty reasonable inclusions. There are some true highlight bouts included here, the best of which, undeniably, is Flair vs. Steamboat from Chi-Town Rumble. Other matches include Hulk Hogan vs. The Iron Sheik and Jerry Lawler vs. Kerry Von Erich.

Of course, there are some matches that really should be on this compilation that aren’t here. For all the talk about WrestleMania I’s main event, the match wasn’t included. While Steamboat/Flair is an incredible bout, WWE fans are more likely to remember the Dragon facing Randy Savage at WrestleMania III. How about Hogan and Paul Orndorff’s famous steel cage match?

Along with the matches are a bevy of promos and extras, including a heavy concentration of clips from Tuesday Night Titans, the WWF talk show. While the promos are incredible, the Titans segments are extremely forgettable, being as bland as some of the jobbers back in the day.

What really burns me about this compilation, however, is the wrestler selection. Naturally, whenever you make any sort of “best” list, there will be detractors saying that “X” should have been included over “Y”; it’s the nature of the beast. There’s no question, however, that WWE severely botched this list.

When you read through the list of those included — Bobby Heenan, Junkyard Dog, Sgt. Slaughter, Greg Valentine, Roddy Piper, Lawler, Anderson, Rhodes, Steamboat, Flair, Jimmy Snuka, Bob Orton Jr., Sheik, Orndorff and Hogan — there are some names that jump out as exclusions. Without going too deep into thought, names like Andre the Giant, Sting, Lex Luger and Savage pop up. All of these men are former champions* and drew huge crowds in the ’80s, and excluding them is a sin.

Along with these singles wrestlers, it’s unbelievable that WWE would ignore the impact tag teams had in the ’80s. Teams like the Road Warriors, Rock ‘n’ Roll Express, Midnight Express, The British Bulldogs, The Hart Foundation, the Fabulous Freebirds and others were as big, if not bigger draws than some of the individuals included in this compilation. It’s a slap in the face of tag team wrestling to not have them included, a slap that continues through current WWE programming.

I really have trouble recommending this compilation. The only real reason to get this one would be for the matches, and that might not be enough to warrant getting a three-disc set for most viewers. Definitely rent it before you buy it, because you might be disappointed.

* For those wondering, Andre the Giant defeated Hulk Hogan prior to WrestleMania IV. After the match, Andre surrendered the belt to Ted Dibiase, which resulted in the belt’s suspension and the tournament, won by Randy Savage.

Disc 1 “Easter Eggs”
* Highlight & click the Chapters option on the main menu & highlight the Roddy Piper button and push the right arrow button twice. A promo by Roddy Piper in Mid-Atlantic will play of Piper talking about wanting the World Title.
* Highlight & click the Extras option on the main menu & on the third page of the extras section, highlight the Pipers Pit – Haiti Kid and push the left arrow button twice. An interview will play with Roddy Piper telling the story about doing a promo about Dusty Rhodes having six liters of puppies.