WWE 24/7 full of challenges for Barreca

Like any product, the subscription video on demand WWE 24/7 channel has a chief architect behind the scenes. Meet Tom Barreca, Senior Vice President, WWE Enterprises.

He joined World Wrestling Entertainment, Inc. in July 2003 and has overseen the launch of WWE 24/7 in the U.S., and, as of last week, in Canada. Plus, just this week, WWE announced a Spanish-version of the product as well.

A graduate of Cornell University and Columbia Business School, Barreca came to the WWE with a rich resume, working at developing new businesses, technology, licensing and interactive TV ventures for AMC Networks, AMC and WE: Women’s Entertainment. While at Turner Broadcasting, he was a part of the team that tried to figure out what to do with the Hanna-Barbera cartoon library, leading to the launch of the Cartoon Network. (He also dealt a little with World Championship Wrestling while at Turner.)

Barreca recalled being a little skeptical when he first met with the McMahon family about employment with WWE.

“I didn’t realize that there was this huge cache of content. When I sat down with the McMahon family, Vince and Linda, and they said, ‘You’re a content guy. We’ve got a pile of content.’ I kind of said, ‘Yeah, yeah, I’m sure you’ve got a pile of content,” Barreca told SLAM! Wrestling. “When I literally walked the archive, you realize that virtually all the video tape had already been transferred to digital, those type of things. For a guy like me, that’s like, ‘Oh my God!’ When you realize how highly rated this stuff was when it ran the first time, and that it hasn’t ever seen the light of day again, that’s a pretty amazing thing to package a product that you can bring to fans. You know that fanbase is huge.”

The work keeps the 40-year-old Barreca very busy, and away from his Westport, CT home that he shares with his wife Eileen and two children, Molly and Mac. “Long before 24/7 ever became a product, I was traipsing all over North America floating concepts to people,” he explained. Professional wrestling was a pioneer in the pay-per-view business, and is one of the initial companies to really get behind the video-on-demand concept, bringing the power of programming to the people. Yet Barreca told CableFAX Magazine in December 2004 that it was still a challenge convincing companies that wrestling is a “serious” business.

In the WWE 24/7 example, there is about 20 hours of footage on the channel at any one time, with four to five hours being rotated in every week. Fans can choose what they want to watch using a menu similar to a web page. Then they can watch it again and again, or pause, rewind or fast forward.

Barreca is determined to expand the 75,000 hours of footage the WWE already has the rights to, including WWWF, WWF, WCW, Jim Crockett Promotions (NWA), the AWA, Smoky Mountain Wrestling and ECW. 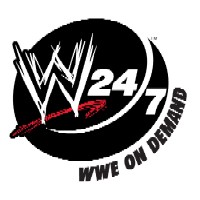 “We’re continuing to look to acquire libraries. In fact, I’m in the course of acquiring one now that I can’t really speak about specifically,” he said. Wrestling insiders believe WWE has its eyes on World Class Championship Wrestling footage from Dallas and Wrestling From The Chase out of St. Louis.

The travel gives him a greater appreciation for the old, regional nature of the wrestling business and the passionate fans from that territory. “It’s really funny, because the nature of the business, where lots of different brands existed each coverage a regional territory, when I’m up here, I’m sure people will talk to me about the Harts, when I’m down in Georgia, they ask about Georgia Championship Wrestling, when I’m in Texas, it’s the Von Erichs, when I’m in St. Louis. It sort of depends on the geography.”

The reception for the WWE 24/7 product in U.S. has surprised him, but also thrilled him. “It’s been huge,” he said. “One of the interesting things about a product like this is you get all kinds of information from our cable partners. As you look at some of the numbers, our fans are blowing us away in terms of the amount of material that they’re watching, how many times they’re viewing repeatedly, the length of viewing. I think if you watch the average TV show, you spend 10 or 15 minutes with any given show. People are spending 40, 50, 60 minutes at a crack with this material. It’s pretty amazing.”

Further penetration of the product is a must, getting 24/7 on more digital cable systems across North America. With just Rogers Cable signed up in Canada, Barreca believes it will just be a matter of time until deals are announced to bring the channel to the Maritimes, Quebec and the west. “We’re talking to everybody pretty actively, and we’ve been, but Rogers was sort of at the fore,” he said. “So it made sense that we came here first. We’re in active discussions with virtually all the players here. I think you’ll see further stuff coming down the road.”

The 24/7 team hovers around 20 employees. “We do a lot. I’ve got a great group back at the office,” Barreca said. “It depends whether or not we’re in library acquisition mode where I’ve got people and technicians going out to review footage, people working with conservators, restoration folks.”

Some of the challenges the channel faces are obvious to long-time wrestling fans. Banned by legal decision not to promote the WWF logo, it has to be removed from old footage. A legal battle with Jesse Ventura over past commentary means that in many cases he is edited out.

Then there’s the music. The most recent obvious example was the ECW One Night Stand pay-per-view, where one of the most incredible moments was the crowd chanting along to Metallica’s Enter Sandman as The Sandman smoked and drank his way to the ring. Yet the song isn’t on the DVD release.

“It’s a money issue and in some instances, it’s a rights-holder issue where it’s a piece of music or a piece of content that we don’t own and control, and we have a partner we can’t make an arrangement with,” Barreca said. “Generally, we try to approach most people with a fair offer and hope we can move along.”

To Barreca, the biggest challenge is making the product good enough to air in digital format. “We do our best to not really change it. In most instance, some of the stuff, particularly as we’ve been acquiring older libraries on film, we end up having to do restoration work. We end up having to go in and clean it up, take some noise out. Generally, we’re trying to stay as true as we possibly can given the confines of legal limits and other things.”

It has been a learning curve for Barreca, who said he was only “a bit” of a wrestling fan growing up in Syracuse, NY. “I saw some wrestling in college up in central New York. I got to see Andre the Giant my first time in college,” he said.

Understandably, Barreca is pretty proud of the product. “We make it fun, we include extra information, we give lots of other special features, not unlike a DVD,” he said. “It’s an amazing product. I can tell you from our experience down in the States where we’ve been out for several months, our fans love it. Not only are they watching every single frame of film we put on TV, but they watch it again and again.”