RVD on the mend

Rob Van Dam was in Chicago, IL this past week to sign some autographs and greet his fans at the 26th National Sports Collectors Convention. He loved chewing the fat with his fans and in the process he really showed off how personable he can be.

“It’s awesome man … The favorite part of my job is all of the positive energy that I get from all the fans,” said Van Dam. “It’s great, I love it … It would be different if everyone came up and said ‘Rob you’re a dick and I hate you.'” 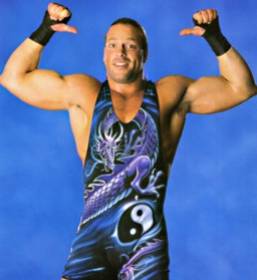 When last seen in the WWE, Mr. Monday Night was drafted from Smackdown to Raw, and took a cheap shot from Carlito. As soon as he comes back from his injury he has one thing on his mind.

“Actually I just kind of want to be consistent,” he said. “I’ve got a good job. I do what I do and I connect with my people. Me and my people stay together regardless of where they put me on the card … what silly storyline they have me do or whatever. I don’t really have any goals. For sure when I get back I want to kick Carlito’s ass and that’s #1 on the agenda. I’m not really thinking past that.”

If you know about RVD’s childhood then you know that he was one crazy SOB. He used to jump off the roof of his house and walk on his hands in the hallways of his high school.

“I was a thrillseeker,” said Van Dam. “In fact I would do lots of things to seek thrills. That lasted until my mid-twenties, probably when I started to fall in love with my wife. Before that I even sky dived out of an airplane twice and I think if you took my pulse I don’t think my heart rate jumped up at all. I was very not exited about it. Bungy jumping was something I wanted to do without a cord and into an air mattress. I have always been about showing off.”

RVD is a regular guy that has special skills. He knows how to talk to people and he connects with the public, young or old, it doesn’t matter. He is a little different than the average wrestler.

“I don’t think I am as musically driven as most people,” said RVD. “I don’t know anything about sports … If you asked me to name five celebrities … the only ones that I know are the people that I have met. It’s not that I hate it, it’s just that I think I go about my day a little bit differently than the normal mainstream guy. With that approach is probably why I looked at wrestling. That’s why I came up with my own moves and pattern myself after anybody in particular. I think the fans appreciate that.”

Many consider Van Dam a headliner that should have the gold around his waist. When he comes back from his knee problems expect him to get a title shot. Doctors told him 15 years ago to give up the business but he won’t.

“Every day here, 99% of my fans say ‘RVD, man, you deserve that gold; when are you getting a title shot?’ Who knows maybe that’s coming up.”

The master of the frog splash has looked ahead beyond his wrestling career and has some outside interests that could help him make the transition out of wrestling someday.

“I have several interests outside of wrestling but I find that I have very little time and very little energy to put into it,” Van Dam said. “Like my comic shop, 5-Star Comics.”

Van Dam has had some great wrestlers signing autographs in his shop almost every other month since it opened. He was once the most popular draw until he had Bret Hart there.

“People went nuts to see Bret Hart. Before he showed up I was always the biggest line in my store and he blew that away. It was phenomenal that Bret wanted to do that. It worked out well.”

Did Van Dam smooth over the riff between Hart and WWE owner Vince McMahon?

“Not to the best of my understanding. I don’t think they even spoke; if they did I sure don’t know about it. That wasn’t part of the plan.”

One thing is for sure, Van Dam is itching to get back into the squared circle and should be back very soon.