From the moment Brock Lesnar made his debut on WWE television back in February 2002, it was evident he was a bona fide monster. Deadly and dangerous, Lesnar would go on to become a three-time WWE Heavyweight Champion. 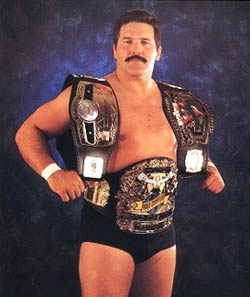 Dan “The Beast” Severn with some of his hard-won hardware.

Transitioning from pro wrestling to mixed martial arts, Lesnar would lose his UFC debut to Frank Mir, but just nine months later would go on to win the UFC Heavyweight Championship — considered the most prestigious title in mixed martial arts — from Randy Couture on November 15.

Lesnar was to face Mir in a rematch at UFC 98 on May 23, but a knee injury Mir sustained while training for the clash required minor surgery and a postponement of the match to July 11 at UFC 100 in Las Vegas.

Like Lesnar, UFC Hall of Famer Dan “The Beast” Severn has excelled in both pro wrestling and MMA, and is the only UFC triple crown champion. He believes that while wrestlers have a susceptibility to guillotine chokes, arm-bars and leg locks, no fighter compares to a wrestler when it comes to takedowns and tenacity to win a match.

Severn recently shared his insight on Lesnar’s debut, which ended when Mir managed to secure a kneebar and force a submission at 1:30 of the first round: “Brock made a tactical error. You see, Brock is an NCAA wrestler and he was facing a Jiu Jitsu expert, and had I been Brock’s coach, I would have told him that Mir had to come to him,” said Severn from his training facility in Coldwater, Michigan.

“Jiu Jitsu experts are lacking in the take-down area. If I were Brock, I would be just bludgeoning Mir in the first round, round and three quarters,” said Severn, who began his career in the fight game as a Greco-Roman and freestyle wrestler. “I would be hitting him with striking combos, forearm shivers, throw up a knee — wham, wham, bam! — splitting open an eye, breaking him down and taking a physical toll. Then in the final minute, if things are going his way, knock him on his can and take him down.”

Lesnar blamed his loss on inexperience and being too aggressive. Mir, on the other hand, saw his win as a triumph of his technique, something he says will happen ever time they fight. For their upcoming rematch, Lesnar will be seeking redemption, hoping to settle some personal differences while retaining the title. Severn agrees the outcome may be different this time.

“Brock was a very successful amateur wrestler, and it was simply a transition phase, that first match,” said Severn. “(In that match), he was doing what he does best: take-down, ground and pound, and then he’d hit his opponent towards the back of the head. And if he had not made that one error, who’s to say how the match would have turned out.”

Like pro wrestling, Severn says mixed martial arts require both the physical preparation and the mental mindset. He makes the comparison between the two: “I found it more difficult to do pro wrestling than MMA (mixed martial arts),” said Severn. “In MMA, all I had to do was walk out there and get results. In pro wrestling, you are an entertainer, you have to put your body in someone else’s hands and pray to God they don’t hurt you.”

In the world of pro wrestling, Brock Lesnar was regarded by many as a prodigy, with his unbelievable speed, quickness, and superhuman strength. Former manager Paul Heyman said in the WWE-produced 2003 documentary, Brock Lesnar: Here Comes the Pain, “He is the Tiger Woods of this business. He’s that dominating. He’s that much better. He has no peers.”

Current World Heavyweight Champion John Cena agreed: “He is one of the best pure athletes I’ve ever seen. His potential is unlimited.”

But comparing pro wrestling to UFC is like comparing apples and oranges. While one is a unique form of scripted entertainment that combines athleticism and showmanship, the other pits athletes of different disciplines against each other in a full-contact fight. 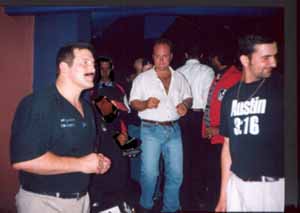 Clearly, mixed martial arts can be a brutal sport. It’s that brutality that former professional wrestler Bret “Hitman” Hart said makes UFC much too real: “I’d never do UFC. I wasn’t good enough and I was smarter than that,” Hart said in a 2008 interview with Canada.com. “I have a lot of respect for UFC guys, but I still think they’re not getting the money they deserve, especially when I see them taking all those head shots. You can see the brain cells just vanishing when they get hit five, six times. It’s the kind of brain damage you carry around forever.

“I have a lot of respect for it, but it’s not something I would have done, since I put too much value on my brain cells. I don’t mind pretending to bash somebody’s brain cells out.”

It was reported, when Lesnar won the UFC Heavyweight Championship from Couture back in November, he took home $450,000, of which $200,000 was a win bonus. Severn said things have come a long way since the early days of UFC when he competed: “I was brought into the sport when it was no hold barred and you just signed a contract that said: In the event of an accidental death, we are not responsible…,” said Severn. “My guarantee walking out of the cage was only $1,000.”

The whole sport has evolved, said Severn. “Back when UFC first started, you had all these one-dimensional athletes; you had boxers, Brazilian Jiu Jitsu guys, taekwondo practitioners and Sambo practitioners. You had fighters who just had one strength, and you were either in the grappler category, or the striker category. These days, you have grapplers who can strike with the best of them, and strikers who can more than hold their own down on the mat. It’s completely different now.”

Severn said he’s not only proud of his numerous amateur wrestling and mixed martial arts titles, but his pro wrestling accomplishments as well, once holding the NWA World Heavyweight Championship. “When I travel, I always carry four belts with me in my bag, and one of them is my NWA title,” said Severn, who is also a motivational speaker. “When people see my wrestling belt, they whisper, ‘Oh, you do that fake stuff?’ And I tell them I’m very proud of that title and my years as a pro wrestler.” 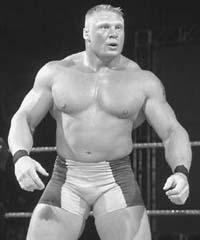 Brock Lesnar in his very early days in the WWE.

“Pro wrestlers are incredible athletes, working without the aid of a safety net,” said Severn. “There is a psychological aspect required to tell a story, every crowd in every city is different, and pro wrestlers have an uncanny ability to improvise — and that’s the beauty of it.”

Hart in his autobiography, Hitman, agreed: “To me there is something bordering on beautiful about a brotherhood of big tough men who pretended to hurt one another for a living instead of actually doing it. Any idiot can hurt someone.”

On the surface, pro wrestling and mixed martial arts may look alike, but they are two very different worlds: one that exists in the realm of real violence, and one more elaborate, founded on the illusion of violence. Regardless, Olympic gold medalist Kurt Angle will tell you in either world, Brock Lesnar is for real.

“I would put him in the ring, in an octagon, in a fight situation, and I don’t think there’s anyone on the planet who could take him,” said Angle in the documentary, Brock Lesnar: Here Comes the Pain.

Severn concurred, “Brock possesses the work ethic that is needed to succeed. A work ethic like Michael Jordan. And you see, he has the knowledge now, and if he takes that knowledge and applies himself in this match with Mir, he can beat him this time.”