Bret Hart’s long-awaited autobiography is indeed worth the wait. Confessional in tone and content, vicious and bitter when called for, and heartbreakingly honest, the book makes a noble, if flawed, attempt to set things straight. 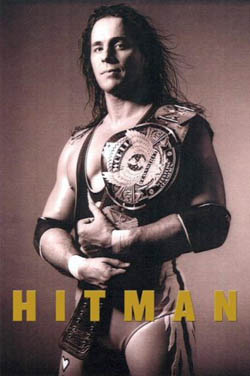 Hitman: My Real Life in the Cartoon World of Wrestling, heading to Canadian bookshelves now, is as complicated as the man himself.

Hart’s life story can be broken down into three parts: “The Rise,” “On Top,” and “The Fall.” Word is that the Hitman always envisioned himself a modern-day Churchill, requiring three volumes of his autobiography to truly tell his lengthy, compelling story. Given that he brought the powerhouse Random House Canada into the wrestling publishing business — with a reported $150,000 advance just for Canadian rights — he has every right to consider himself apart from the rest of the mere mortals writing their own self-glorifying autobiographies.

Of the three sections, it’s “The Fall” that most fans are waiting for. It’s all there: Hitman’s take on the infamous Montreal screw job in 1997; his feelings on Vince McMahon and those who he feels did him wrong; the tragic accident that killed his brother Owen; the misuse of a modern-day legend in World Championship Wrestling; the accident that ended his career; the debilitating stroke that crippled his pride as much as his body.

To anyone familiar with the documentary on the Montreal screw job, Hitman Hart: Wrestling With Shadows, there’s not much new from Hart. But he takes the reader through the step-by-step process that gets him to that point, and how the “betrayal” in the ring wasn’t completely unexpected. Like any other person’s story, the reader must remember that this is from a single perspective, and not meant as gospel.

Those looking for all the dirt on what happened in the twilight of Hart’s career won’t be disappointed. His obsession and hatred of Shawn Michaels actually gets somewhat tiresome, though believable. No stone is unturned, as he reveals his allies and enemies one after another through it all.

But to skip immediately to “The Fall” would mean missing the best part of the book.

Hart’s wry, defeatist sense of humour makes for a terrific, easy read through the trials and tribulations of growing up one of 12 kids in Calgary’s Hart Family. “The Rise” is chock full of fun stories of Stampede Wrestling and Japan, vividly told by a man who takes great pride in his work — in this case as a writer. As in wrestling, the writer Hart isn’t actually “The Best There Is, The Best There Was, The Best There Ever Will Be,” but he’s also a way better wordsmith than the average person would expect. According to Hart, the basis of the book are audio diaries that he kept throughout much of his career. If so, then his ability to turn idle thoughts into complete sentences is equal to his skill with the sharpshooter.As the book progresses, Hart documents the breakdown of the Hart family itself, as spite and jealousy rears its ugly head again and again through times of family tragedy. It’s his brother Bruce that comes off the worst, though Smith Hart and Ellie Neidhart aren’t far behind in the abuse. And Davey Boy Smith’s and Jim Neidhart’s battles with drugs are chilling. Yet for all the drama, Bret’s book is still tame compared to the now-banned tabloidish book by his sister, Diana Hart Smith.

The middle part of the book, “On Top,” is undoubtedly the best section. Hart is a man who has given his profession — and his life — a lot of thought, and it shows.

In regards to dropping the WWF World title to Yokozuna at WrestleMania IX — who would then lose the same night to a returning Hulk Hogan — Hart thinks of the effect the move would have on his fans. “As I lay in bed that night, the more I thought about what Vince had in mind for Hogan, the more I felt that it would completely backfire on both of them,” he writes. “The hokey finish would stink, maybe not immediately, but in the weeks to come my fans, who were the biggest contingent in Vince’s paying audience at that time, would gag on it. There was something different about my fans. They really believed in me as a person.”

Hart explores fandom, trying to come to grip with why he’s popular in one country but not another. He acknowledges the worked nature of professional wrestling and considers why one person gets pushed over another.

He isn’t scared to come clean on controversial issues, either.Hitman openly talks about his steroid use, good times with drugs and alcohol, and cheating on his wife. In fact, he talks so freely about it all that many Hart loyalists will be shaken to their very core.

For example, he shares his experiences with Dr. George Zahorian in Hershey, Penn., the doctor that was convicted of distributing steroids.

“When it was my turn, the doctor took my blood pressure and pulse. Then, like everyone else in the line, I handed him some crisp hundred-dollar bills and stocked up on twenty vials of testosterone, twenty DecaDurabolin and four bottles of gonadotropin — to keep my balls from shrinking — along with several boxes of Halcion so I could sleep and a cache of needles,” he writes. “We all knew Zahorian was a gouger, but at least he was a real doctor and his drugs were legit, which was better than buying gas from pushers at local gyms.”

The reader will also lose track of the conquests Hitman admits to / brags about. “My lust was always stronger than my guilt,” he confesses. His combustible marriage to Julie is detailed through the ups and downs as well, and his brief second marriage, to an Italian woman, gets a mere mention.

Through much of the book, Hart’s tone could be best described as resigned. He doesn’t especially take great pleasure in recounting his life, at least not in comparison to the joyride of Mick Foley’s books, the first of which set the bar very high for wrestling autobiographies, or Chris Jericho’s competing release, A Lion’s Tale.

Then as the book comes to a close, the bitterness of the ending in the WWF and ridiculousness of his WCW days gives way to a type of melancholy for lost friends and family and his lost vibrancy. It is impossible not to feel for the man, his pain and suffering are laid out on the page for all to read.

The primary weakness of the book is also one of its strengths. True wrestling fans will finish the book and desire more. Non-wrestling fans, whom the publisher has to be aiming for given the astounding amount of the advance, will get bogged down far too easily once past his early days in the Hart Foundation.

The other flaw won’t be evident to the mainstream audience, however. The editors at Random House let some embarrassing wrestling errors slip through. From the first page, where Sam Menacker’s name is misspelled, to a reference to something called “lucia libre,” it’s a nitpicker’s dream. My favorite is a reference to Vince McMahon’s mother Juanita dying; his mother, Vicki Askew, is very much alive and Juanita was Vince McMahon Sr.’s second wife. (I will, though, give serious props to whomever edited it down to 533 pages from a three-volume set. And there’s even a real, honest-to-God name index.)

In the end, Bret “Hitman” Hart has scored a real victory in publishing. Hitman: My Real Life in the Cartoon World of Wrestling leaves few stones unturned and little blood unspilled. He is a proud, broken man, sharing his recollections of a strange, strange business.

Hart, perhaps, sums it up best with this: “[W]hile everything in wrestling was supposed to be bullshit, that bullshit was everything to me.”