PWI artist aims to be a top draw

For almost every professional wrestling fan, there has been a time when they watched their beloved show on television, and thought “I would love to do that.” Though it may have been a fleeting thought, many of us have dreamed of competing in the ring, or being the modern day equivalent of Tommy Young or Gordon Solie. 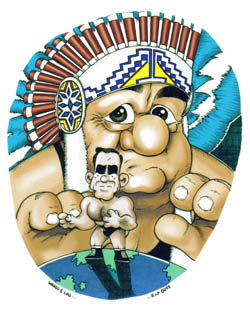 There is, of course, a huge difference between “I would love to do that” and “I could do that.” So when New Zealand-born Jason Conlan, Pro Wrestling Illustrated‘s “Mister J” cartoonist, wanted to get involved in professional wrestling, he married it with his tremendous talent for art.

“My love of wrestling and drawing developed around the same time,” Conlan told SLAM! Wrestling. “I was around six years old when I discovered Steve Rickard’s NWA-affiliated promotion here in New Zealand. Even as early as that, I remember trying to draw Baron Von Krupp (Killer Karl Krupp), making a mistake, and throwing what I’d done away in disgust. Where was the liquid paper when I needed it then?!”

Unfortunately, Rickard’s promotion — which saw legends such as Ric Flair, Harley Race, Abdullah the Butcher, and Andre the Giant come through on tours — soon lost its television deal in the country. With no outlet for his interest, it was only his discovery of the famed “Apter” magazines that maintained Conlan as a fan.

“The Apter mags were a complete eye-opener,” he said. “There were so many wrestlers, and so many promotions. There was no American wrestling on television at this point, so just about all the information I was getting was from the magazines. Even now I still mark out from time to time, when I finally get to see footage of the stories I was reading back then.”

In terms of his developing artistic talents, Conlan admits to hardly being the finest student, instead preferring to plough his own working furrow. He would pay careful attention to comic book drawings, newspaper strips, and political satire cartoons, all of which acted like textbooks to him.

“I found art school to be boring and expensive, which wasn’t a good combination,” he said. “I’d been selling cartoons since high school, and had a regular spot in the local newspaper. Looking back, having the test of my work being printed was more than I could have got out of art school.”

Even though the first regular American wrestling on New Zealand television was WWF Superstars of Wrestling, in around 1987, Conlan was always more interested in the NWA (Jim Crockett Promotions) wrestlers, perhaps because the Apter magazines had such a heavy NWA slant.

“I may have been easily led by that,” he admitted. “But also, they were more interesting to draw, as they looked more like kick-your-ass wrestlers than the ‘prettier’ WWF performers. That’s not to say that I didn’t enjoy watching WWF TV, it’s just that I never thought that guys like Hulk Hogan and Paul Orndorff appeared to be as tough as their NWA counterparts.”

Working in a comic store while drawing part-time, Conlan’s big break came when he began working for Pro Wrestling Illustrated in 1995. He had already done some wrestling magazine work, for the Wrestling Then and Now newsletter, and the Australian publication Piledriver, but PWI was what he considered to be “big time.””I remember that I rang their office one day, out of the blue, and asked ‘How would you like a new cartoonist?’ — and whomever I spoke to politely declined,” Conlan explained. “Two weeks later, I tried again, and I think I actually got through to Bill Apter. I spoke to PWI backwards and forwards for two months, until I eventually got a call from Stu Saks, asking me if I would like to do a monthly cartoon, plus 30 full-page cartoons for their wrestling annual. Getting into the mag I read at high school, an international mag, and being let loose to draw whatever I wanted? It was great!”

Since then, Conlan, who works at a bookstore, has contributed to 1wrestling.com, Prowrestlingdaily.com, as well as the online version of England’s Sun newspaper — the most-read daily in the country. All of these are opportunities that the 36-year-old artist is grateful to have received.

“Everyone at PWI has always been great to me. Bill helped me do some work with 1Wrestling, and Stu has invited me to work on the entire stable of PWI magazines.”

“Getting the chance to do some work for The Sun was wonderful, but frightening as well. I had complete stage-fright when I heard the number of hits their website gets. I couldn’t draw anything for two whole days! I think it was just a matter of learning what I could get away with, and what I couldn’t get away with. That, and working out how things would look in print.” 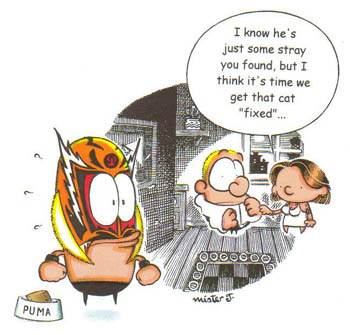 With the aforementioned creative license that he is granted, Conlan is able to put some emphasis on the performers that he gets a particular kick out of drawing. One such wrestler is TNA star Scott Steiner, who didn’t quite enjoy being drawn, as much as the artist enjoyed drawing him.”WCW toured here towards the end of the company, so I thought that it might be nice to go and hang out with some of the guys. I sent their office some of my work, and when the tour arrived, I was told ‘Scotty loved them’ in a heavily sarcastic tone, and ‘He’s real keen to meet you’ in a heavily ominous one. In other words, I was told to stay away from him. Which just meant that when I decided to draw him again, he looked even more like an overstuffed sausage!”

Sadly for Conlan, poking fun at Steiner may have to be left to another day, should he pursue his ambition to have his work commissioned by the WWE. Considering that some WWE stars are also among his favourites to recreate in caricature form, it would seem to be a natural fit.

“I may joke about it somewhat, but I would really love to do a daily cartoon for WWE.com. I think it would be fantastic. When you consider that they own virtually every tape library under the sun now, I don’t think I’d be stuck for ideas. Actually, I have a theory that if I draw Vince with a fang long enough, he’ll hire me just to get me to stop. Hey, it’s a dream!”

He may consider it just a dream, but no doubt there are wrestlers at Titan Towers who would love to be drawn by Mister J. Just like the Mexican star Puma, who noted: “When I saw myself (in the PWI comic strip) … I thought I might as well just retire right there. It just doesn’t get any better than that.” 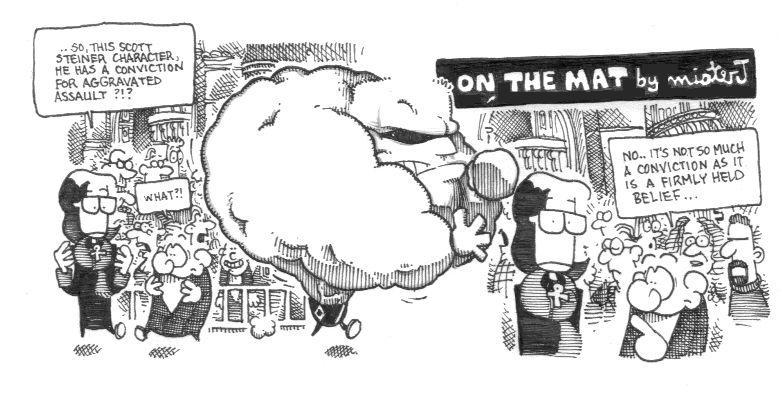