Taking a chance paid off for Bruce Swayze 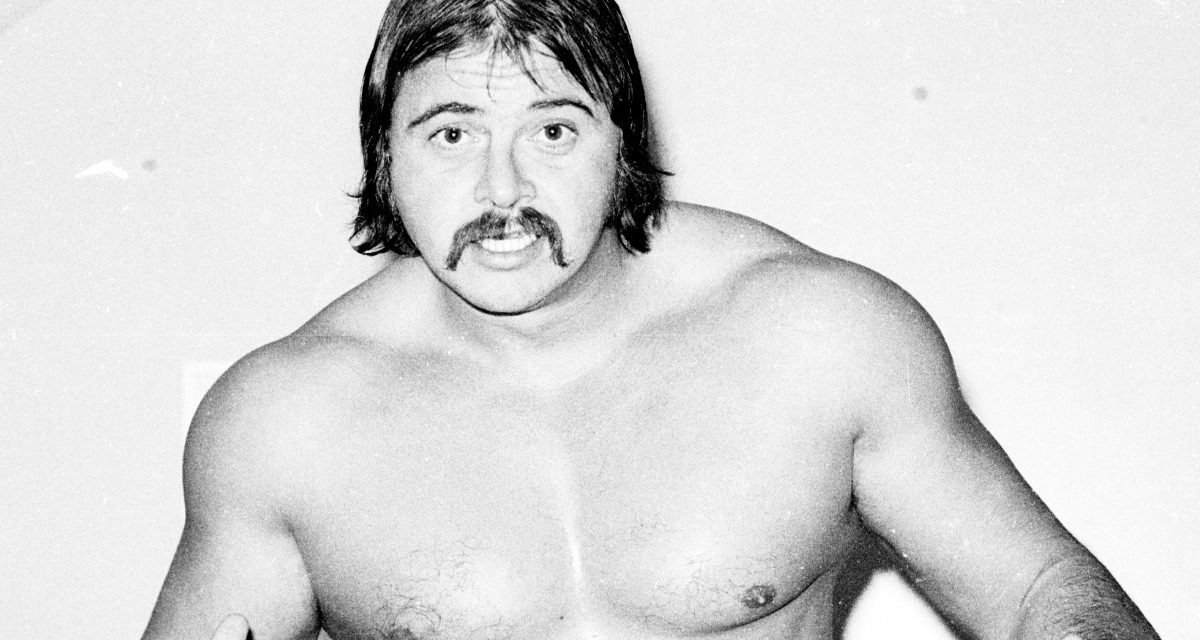 The turning point in Bruce Swayze’s life came a half dozen years into his wrestling career. A weekend warrior from his day job in a Hamilton, Ontario steel mill, Swayze had been to the likes of Buffalo, Pittsburgh and Detroit, but he longed for more.

It was about 1968, and Swayze was courted by Bert Ruby in Detroit and Pedro Martinez in Buffalo to make the leap to full-time wrestler.

“I asked my dad what he thought. He said, ‘Hey, go for it,'” Swayze recalled. “I was a better hockey player than I was a wrestler at the time, I thought. Anyway, it all worked out.”

Swayze, born in 1940 in Kirkland Lake, Ontario, was one of many who came out of “The Factory” that was Hamilton. He was a decent hockey player — his dad had made semi-pro — and Swazye found himself at Jack Wentworth’s gym looking to get in better shape.

“I was working out at Jack Wentworth’s in Hamilton and he had a ring there. I had wrestled a bit in school, amateur background,” Swazye remembered. “I was pretty consistent in the gym, and Jack said to me, ‘You’re the perfect type of guy to get into this business. You should start working with me a little. We’ll get you on the mat.’ So he really talked me into it. It wasn’t a big sell job. I wanted to get started anyways. So I started with Jack, I think I was 17 or 18 years old. I was still playing hockey.” 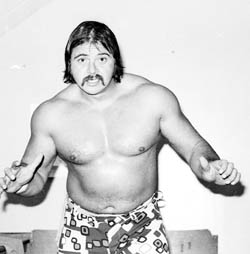 Every Thursday, Wentworth would run a show at his gym, allowing his students and other pros who were home in town a chance to work in front of a crowd. “Some of my great moments really were learning the business with Jack. He was a great teacher. He had his little shows on Thursday nights,” said Swazye, who is 5-foot-10-1/2, and wrestled at anywhere from 218 to 235 pounds.

In 1961, Swayze started hitting the road to Detroit, working under a mask for promoter Ruby, traveling with others looking for their breaks in the professional ranks, like Ivan Koloff, Terry Yorkston and Johnny Powers. (Swayze claims that he was the one working the desk at Wentworth’s the night Powers — Dennis Waters — first signed up at Wentworth’s.)

After the decision to quit the steel mill, Swayze really started to get going in Buffalo for Pedro Martinez. “Pedro is actually the guy that got me going real well,” he said. Swayze would also work regular for Martinez’s IWA in 1975, which Eddie Einhorn was also involved with.

It was in Buffalo that the Love Brothers were born, Reginald Love (Johnny Evans) and Hartford Love (Wes Hutchins). Later, Swazye was added to the team as a manager who could wrestle. “We were hot,” claimed “Beautiful” Bruce. “We got a lot of heat, the three of us. If I think about it now, wow, unbelievable. As much if not more than they’re getting with anybody out there now. We could hardly get to the ring, let alone getting out of it.” 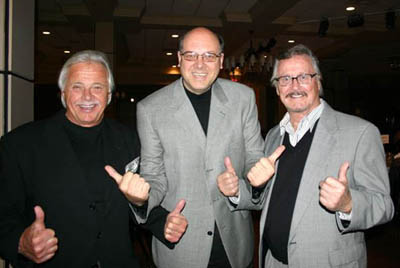 To this day, Evans remains one of Swazye’s closest friends, and introduced Bruce when he was honoured at the 2003 Cauliflower Alley Club banquet. He did it in typical Johnny Evans fashion. “He wanted me to say that it’s a great honour for me to honour the honouree. That stinks. Christ. Anyway, he’s a nice guy, puts himself over, very fit, personable, good-looking guy and generous. Bullshit. Let him take you to the best restaurant in town and watch his arms shrink! … when he was going with his fiancee, his wife now, he worked part-time at a funeral parlour. I asked, ‘What are you doing that for?’ He didn’t answer. I talked to his wife, and she said, ‘I got flowers every week.’ … Anyways, Bruce, I’ve got to be honest with you. For 40 years, we’ve been good friends. We always said there wasn’t anything he wouldn’t do for me. That’s exactly what’s happened in 40 years, he’s done nothing! But a good guy, one of my best friends. In this world, if we get five people that we can truly say are truly close to, and we can depend on them, he’s in the top five with me.”

The Love Brothers provided him his greatest exposure, but it was not a long period of his career.

Swayze is quick with a story on just about every territory he worked:

He also helped friends, like “Gabby” Gil Hayes get booked into Puerto Rico. They roomed together one tour, said Hayes. “Bruce was one of the funniest guys I ever met. He really kind of liked his booze. I was already in Puerto Rico when he showed up there. He was working tag team. He got into one of the hotels after he got into San Juan, and he got pretty ripped, I guess, because the next day he was out, he found himself lying on the beach and he was just red as a lobster. … He had to work the next night, and he could hardly stand being touched because he was so sunburned.”

Gene Petit (later Cousin Luke) tells another tale of Swazye and a drinking establishment. “Bruce was a lot of fun to be with. We went to the bar after the matches. He’d tell everybody he was Burt Reynolds’ stunt double. So drinks were on the house, a fight would start. Bruce would sneak out and say, ‘Oh, I can’t get hit because I’m a stunt double and if I hurt my face I’ll lose my job.'”

Like many oldtimers, Swazye aches at the thoughts of so many old friends gone. He’s often associated with the late Eric the Red (Erik Hanson), which is appropriate, since Swayze helped him get his big break, which came in Buffalo. 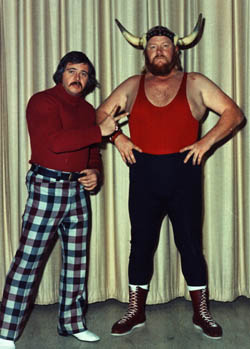 “Bruce Swayze, Boooce, as he was known managing Eric the Red, first met him about 30 years ago, 8 o’clock in the morning, 100 degrees, Mustang convertible,” recalled Gene Petit. “Bruce is all dressed up in a suit and Eric the Red has a tank top and shorts and went to do TV. Went from Louisiana to Charlotte to Florida.”

The Eric the Red tales come easy to Swayze. “Eric the Red and I had a lot of funny, funny stories together when we travelled. We went in to Oklahoma together and Bill Watts really took a liking to us, but yet, we gave him a lot of grief. We aggravated the shit out of him. He’ll tell you that. They had to split us up. They put one on the north end and one on the south end. Finally, we told him we were going to walk out and they put us back together, Leroy put us back together.”

Indeed, Watts agrees. They did drive him crazy, but they also worked well together, he said, and Swazye was actually a good influence on Erik. “Bruce is kind of even-tempered in many ways. It’s kind of like Skandor Akbar when I put Kamala with him because some of these guys need a stabilizing influence on the road. Akbar could be upset with you, but he was going to make his bookings. I didn’t care if you were upset or not, as long as you made your bookings then we worked things out.”

Swayze stopped wrestling full-time in the early ’80s, but still wrestled on occasional spot shows until 1988. He also promoted charity shows around Kentucky.

He settled into his wife’s family’s packaging business, Alliance Rubber Band Company, the world’s largest maker of elastics. It wasn’t a tough decision to quit after 15 solid years. “I met a girl and I got married. I was still wrestling at the time. They asked me if I’d like to get involved in the family business. I started doing some things for them as I travelled. I still did my thing on the road. The opportunity was there so I decided to call it off.”

Being a salesman and a pro wrestler aren’t all that different, he said. “The wrestling background is a tremendous help to me because so many people were closet wrestling fans. They knew who I was and I have great stories to talk about. That’s basically what really got me over in the sales department.”

Now 67, Swayze has the time and the money to travel a lot, whether it’s to visit a son in California, his mother in Hamilton, his cottage in Collingwood, or old friends at reunions. Always well dressed and quick with a laugh, Swayze is still a friend to many.

He also left a definite legacy on pro wrestling, said Hayes. “He was not a large man by any means, but he sure cut a wide swath,” he said. “He was always willing to give his all, and he could draw pictures for the crowd. He’d get the crowd involved in things, which I found was really, really good.”