The man known as “Shocker” shocked his family and friends when he passed away on October 2, 2007, from lung cancer. The shocker was that Sean Evans was not a smoker.

Born Sean Charles Evans on January 28, 1971 in McKeesport, Penn., Evans went on to earn a Bachelor of Arts in Administration of Justice from the University of Pittsburgh. During his wrestling career, he worked full-time as a protection specialist for the Target Corporation and as a bouncer around Atlanta. 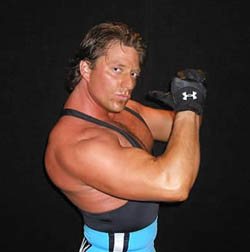 “Sean was probably too nice of a guy to make it big in this business,” Kanyon told SLAM! Wrestling. “He was a very kind, considerate and caring guy.”

Evans worked mostly out of Georgia during his wrestling career, including when ECW and WWE made their way to town. He last worked for NWA Wildside and Georgia Championship Wrestling in 2005.

During his time with GCW, he teamed with Sonny Siaki, ending their run as a team following a tournament final loss to determine the GCW tag team champions in March 2005.

“He never did it for the glory,” his mother Virginia Evans told the Pittsburgh Post-Gazette. “Sometimes he only made enough at it to cover his gas money, but he did it for the love of it.”

Behrens told SLAM! Wrestling that Evans was a teacher and a pleasure to be around. “One time he came with Christopher Samson worked a match. Evans played the heel and was trying to help Samson get more wrestling jobs. The match they worked saw Samson dive headfirst through the ropes to the outside where Evans was awaiting. Samson miscued and Evans moved to save him from a nasty fall.”

When WWE came to Georgia, Evans often worked Heat or Velocity matches. He wrestled John Heidenreich, Val Venis and Essa Rios between 2001 and 2005. He also took part of the “White Boy Challenge” in 2003 with Rodney Mack and Teddy Long.

His most unusual role for the WWE came at Vengeance 2003 when he worked as the Easter Bunny during the “The APA Invitational Barroom Brawl.”

“Sean was a sweetheart of a guy, who was always generous with his time and I found him to be one of the easiest guys to talk to from this business,” wrote Rich Tate, of Georgia Wrestling History on a message board. “He was also one hell of a wrestler who never seemed to get the break he deserved.”

He was diagnosed with cancer in spring of 2006. Former WWE diva Amy “Lita” Dumas helped headline a benefit in September 14, 2006 in Atlanta to assist in his medical bills and create awareness. Raven, Lex Luger and Marcus “Buff” Bagwell also attended the benefit.

Evans was engaged to be married when he was diagnosed with cancer. Friends and family members were at his side when he died Tuesday.

Friends were never told a reason for Evans developing cancer. Behrens noted that no one will ever know how or why.

“Yes, I do believe it was second hand smoke,” Kanyon said. “Sean was a bouncer for a long time here in Atlanta and spent a lot of time around smoke-filled clubs.”