I’m a big fan of old school professional wrestling and as such I devour any material that is offered on the subject matter. 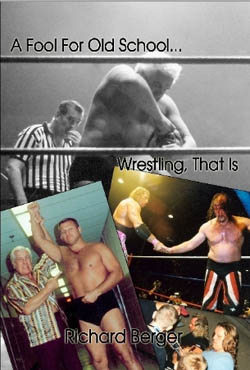 Thus, with eager anticipation, I read the new book, A Fool for Old School….Wrestling That Is, published by Richard Berger, a Vancouver-based writer and wrestling insider with impressive credentials. He makes no bones about the fact that his fondness for wrestling centers on the old school style which is mainly pre-1990.

The book is actually a collection of 20 columns written by Berger and previously published on the Internet websites of The Fight Network and Live Audio Wrestling between June 29, 2007 and June 29, 2008. The author selected the columns because they were personal favourites or because they had elicited a strong response when first published. In order to assure readers of a fresh viewpoint, he has revised and updated the original columns. What follows is an honest and often humorous account of pro wrestling in the 1950s, 1960s, 1970s and into the 1980s.

Many wrestling fans, who were weaned on the game when it was believable, will gravitate towards Berger’s insightful look at pro wrestling as we knew it. If anything, I found myself wanting greater detail on the subjects raised by the author. The chapters are short and to the point since they were originally penned as columns or essays. As such, the content lacks the depth and analysis that one normally associates with a book but nonetheless provides the reader with much information.When taken at face value, the book proves to be a breezy, light read. The intricacies of old school wrestling are detailed thoroughly by an author well versed in his subject.

Berger takes us on an odyssey through the wrestling world that began for him in 1958 as a very young fan in California. He was hooked on the game, whether on television or in person at Olympic Auditorium in Los Angeles. Magical names such as Mr. Moto, Tricky Ricki Starr, Hard Boiled Haggerty and the Intelligent Sensational Destroyer quickly became part of the young boy’s make-believe world. His love affair with wrestling will ring familiar to many fans of his generation who grew up watching this fascinating business and remained fans or students of the game for a lifetime.

Figuring prominently in Berger’s recollection of old school machinations are the concept of endless grudge matches and meddling managers as personified by Gary Hart, a master at his craft. The inept refereeing angle is also highlighted since referees were key figures in the old school plots.

But old school regulars such as the midgets and ladies, wrestling bears and alligators and blimps receive scant attention even though they played a large part of wrestling’s past.

One of the author’s lasting impressions at age 12 was meeting his hero Freddie Blassie on the beach one day. Though few words were spoken between the boy and the wrestler, the encounter is symbolic of all the chance encounters so many young fans had with their heroes at the back doors of arenas or in parking lots or restaurants. Interaction with the wrestlers was an unforgettable experience in that era.

But as he grew older, Berger became more sophisticated and street smart in the ways of the game. He was able to appreciate the finer points and techniques in a match from old pros such as Honest Johnny Valentine who not only worked the fans and his opponent but was equally adept at stroking the referee for an ultimate victory. It is the little things during a match that sometimes escape the ordinary fan that Berger catches with an eagle eye.The author eventually moved to Vancouver where he achieved every wrestling fan’s dream. He was given the opportunity of working with Canada’s first family of wrestling. Berger became the British Columbia representative for the Calgary-based Stampede Wrestling, under the control of the Hart family. Continuing his evolution through the wrestling world, the student who had once studied the game from outside the classroom now became an insider.

He helped promote the organization in British Columbia as well as acting as a ring announcer. The experience assisted Berger in rounding out his education as a keen wrestling observer and one who thoroughly understands the mechanics of the mat. 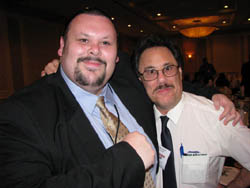 But the recurring lamentation throughout the series of columns is the loss of innocence among the fans with the disappearance of old school wrestling. It is a lament that is heard quite often today as “old schoolers” dismiss the new wrestling menu that has become known as sports entertainment.

Berger admits in the last chapter that he has had problems with the premise of the WWE and its previous reincarnations over the past 43 years. The “grudge” has festered for decades, ever since as a young Californian, the author ventured east to catch the WWWF flavour of the day and met with extreme disappointment over the product.

Since that time, as the WWWF evolved into its present state, the author’s dislike for Vince McMahon’s version of pro wrestling has increased steadily while his love for old school has grown in mythical proportions.In fact, this is the present state of the game. One faction consisting of wrestling historians, writers and fans that have remained true to the pro wrestling of their youth square off with another faction who subscribe to the current state of wrestling as sports entertainment.

There is no mention made of the thousands of former fans whose sensibilities were “kayfabed” to death and have denounced pro wrestling, in whatever form, for evermore. There are always winners and losers in any endeavor. This is particularly evident in the wrestling business where no one has ever risen to the top without using the lower rope to avoid a count out.

But this book will appeal to old school purists who will be reminded of the game as it once was and perhaps serve as a valuable learning tool to present followers of sports entertainment who are interested in the history of pro wrestling.

Berger gives honest opinions and clear and concise analysis supplemented with rare photos. It is worth a read and a place among the growing catalogue of old school material on the market.