In my 25-plus years of being a wrestling fan, though that fact dwindles each day, I have only recently been able to figure out the language of pro wrestling.

Remember back in the good ol’ days when wrestlers simply walked to the ring, no entrance music, did their thing, left the ring and that was that? Yeah, I do, too. 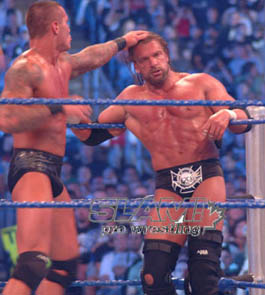 Nowadays, every wrestler has to have a hand gesture, their own music (which sometimes gets corny and silly when a wrestler is doing a run-in) and an exact routine they walk to and enter the ring.

Wouldn’t it be cool if music played for me each time I walked in and out of my office or showed up late to a meeting? “Hey, where’s Matt? (some Kid Rock song starts up) “Sorry I’m late. What did I miss?”

Simply put, wrestling nowadays, at least that is on TV, is boring and routine. Entertainment? Yeah, right. I’d rather watch curling. Seriously.

Names — who goes by their real name any more? No one. How soon we forget that one of the all-time great eras in wrestling was led by two guys who did just that — Kevin Nash and Scott Hall. You fans these days might have to do a Google or Wikipedia search.

And the lingo — don’t even get me started on that.

In the past few years, I’ve come to learn that it’s not an ovation, it’s a pop; it’s not booing, it’s getting heat; the act of wrestling is now called competing; an interview is called a promo; Raw, Smackdown and ECW are not separate TV shows, but different brands; the bookers are called part of the creative team; any woman is a diva; and the word wrestling is rarely used, but sports entertainment is. Sad.

Here’s another aspect of wrestling that has me boggled. If the majority of fans out there (and if you’re reading this, you’re one of them) live vicariously through message boards and the Internet, why is it such a shock to you when things happen on TV? Back in the day, TV tapings were held and the only people that knew what happened were the people that were there. Us normal folk found out weeks later when the matches aired on TV.

Titles — another mistaken use of the word. A title in pro wrestling means nothing. All a title means is the person holding it has worked their way up through backstage politics, failed a drug test here and there and now has a leading role. A role. Nothing more. Boxers win titles. MMA maniacs win, I think, titles. Golfers, baseball players, people that play a sport win titles. When was the last time you saw Kevin Costner win a title belt for a film, or Patrick Dempsey walk onto the set of Grey’s Anatomy with gold over his shoulder? Exactly — what is on TV pretty much every night of the week, whether it’s WWE, TNA, ROH, whatever, is not a sport. Vince said so.

The fans out there are also what a relative of mine once called “carnival people.” You actually think that when a feud is ongoing that the two people involved really hate one another? I have a friend who’s over the age of 30, still lives at home working a 10-hour-a-week job, yet spends every dime he has not to move out and have a life of his own, but on pay-per-view shows, magazines, T-shirts, autograph signings, VHS tapes to tape each and every WWE show, the works. He also complains when a wrestler loses and wonders why they couldn’t kick out of a choke slam.

Some fans treat wrestling like a real-life event. It’s funny how that goes. They rush to the store to get markers and poster board for a sign, yet don’t know there’s a war going on because wrestling encompasses the TV time. To them, the fake-muscled Triple H and Randy Orton is a “war.” Again, sad. The Chris Jericho incident in B.C. is a perfect example of fans getting out of hand. You didn’t see people attacking the actor from Happy Gilmore that bought his grandmother’s house and then stole his green jacket for winning the final tournament, did you???

Like my wife has said for years, wrestling does indeed rot your brain cells. Thank God mine are starting to resurface…

And I know what you people will email me — “If you don’t like it, don’t watch” — and that’s fine. All I know is that yes, I am 30 years old, I do yearn for the 1980s when it comes to wrestling and hit up YouTube daily for old school classics.

I can remember watching wrestling on Saturday mornings and actually being excited. I fathom the ‘Net has killed all the excitement, leaving us fans who have been fans longer than the majority of today’s fans have been alive, to sulk and no longer call ourselves wrestling fans.

But these days, I’m proud to say I know who Jennifer Jones is. Heck, I’ll even tell you about the wars in Iraq and Afghanistan if you can pry yourself away from medically-enhanced women with squeaky voices.