LAS VEGAS – At the best of times, when a professional wrestler gets a microphone, there is a little baloney being spewed. But at a Baloney Blowout dinner, such as Tuesday night’s affair, it got a little out of control with the open mic. After all, the Iron Sheik was in the room.

What can you say about the man that hasn’t already been said? He’s one of wrestling’s true characters. Is his rambling madman schtick on the microphone a work? How much of it is the Iron Sheik and is there any Khosrow Vaziri left in there?

Now before we go any further in the descriptions of the Blowout at the annual Cauliflower Alley Club reunion, it must be said that the man taking the microphone around for the four “open mic” portions of the evening was this writer. So some of the blame for Iron Sheik getting to the microphone not once, not twice, but THREE times lays with me.

But hey, you try to stop him. 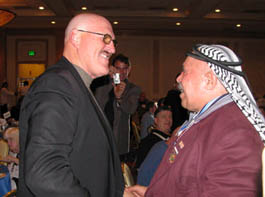 Sgt. Slaughter and The Iron Sheik chat before the start of Tuesday night’s Baloney Blowout. Photos by Greg Oliver

Especially when it’s his friends in the business handing him the podium.

There was Superstar Billy Graham, like Sheik, at his first CAC reunion. An accomplished artist, Graham presented his old friend with a portrait he had painted. “To the Iron Sheik, a real champion. Thank you for your friendship,” read the inscription on the back.

But Graham, perhaps forgetting the intelligence of the audience — or maybe playfully aware of it — rambled a bit, praising the Sheik’s Olympic gold medal, which is a bogus piece of hooey that has been passed on through history like a stubborn STD.

The Iron Sheik started coherently enough. “I remember when I used to drive the ring truck” for the AWA, he said. He talked about seeing the big stars, like Ray Stevens and CAC President Nick Bockwinkel, driving their Cadillacs while he toiled with the old truck.

From there, he sort of lost track of his thought/point, at one point turning to Graham and asking, “What do they call this Club?”

After eventually wresting the mic away from the Sheik and Graham, it was only logical to hand the mouthpiece to one of the Sheik’s greatest adversaries, Sgt. Slaughter. Sarge, recently downsized by WWE, looked around the room and recalled how so many of the attendees were “pretty stiff on me.” He shared stories about the Sheik’s early days training with Verne Gagne in Minneapolis.

Likewise, Hacksaw Jim Duggan (“it’s an honor to be here”) had to talk about the Sheik as well. And Ken Patera, well, there was another who started going on and on — there was no remote off switch — about his career and his friends. As Patera spoke, Sheik made his way across the room to him. Being the concerned co-host, I made an attempt to dissuade him from getting on the microphone again, and was succeeding until Patera handed it right to him.

It’s like his friends, with a knowing wink and a playful smile are entertained by his antics even more than fans are. Every time Sheik spewed his semi-coherent diatribes, there was Terry Funk, seated gleefully next to his wife Vicky, nearly falling over from laughter. The Iron Sheik is like their personal wind-up toy that results in hours of fun.

As sadly entertaining as it all was — sort of like watching a bunch of toy cars crashing — the Sheik ended up taking away from some of the real honorees Tuesday night. Even worse, he seemed unable to turn it off, and drew a crowd at the back of the room while presentations were going on, making it difficult to hear.

As big as star as the Iron Sheik may have been, and perhaps still is with his vulgar attempts at humor on the Howard Stern Show and other mediums, for him to take away from his peers being honored was wrong.

The crowd of about 300 learned during the Blowout that two of this year’s honorees were not able to be at the Gold Coast Hotel and Casino for their awards due to health reasons. Bill Bowman, who worked under many names, but is perhaps best known as Bill Sky, just had a major heart operation to replace an aging part. And Princess Jasmine is in a Chicago ICU unit facing the ravages of pancreatic cancer, and is not expected to live much longer. 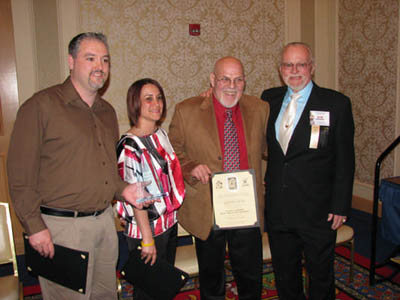 Leo Burke holds an award for the Cormier family with his son Travis, daughter Kathryn, and Bob Leonard

One of the big moments came when Leo Burke accepted an award on behalf of the entire Cormier family of New Brunswick, who sent four brothers into the ring as wrestlers (The Beast, Rudy Kay, Leo, and Bobby) and one referee (Malcolm).

Japanese superfan Shuhei Aoki was presented with the Red Bastien Friendship Award. A longtime friend of this writer, it was my pleasure to introduce Shuhei, and be beside him on stage, trying to steady his shaking hand as he delivered his short acceptance speech.

Steve Yohe received the James Melby Historian Award from the club. Yohe has done some of the most important research into the likes of The Destroyer, Jim Londos, Gorgeous George and Danny McShane of anyone.

A number of special presentations happened as well, including a thank you to Harley Race’s wife B.J. for all her contributions behind the scenes to pro wrestling. Another went to Dean and Ruth Silverstone, who toil away at the excellent Cauliflower Alley Club newsletter and manage the Club’s mailing list. And Al Friend had a special memento made up for Father Jason Sanderson.