LAS VEGAS – For as much laughter and hugs that the Cauliflower Alley Club reunion provides to attendees, there are also sobering reminders of one’s own mortality as details of colleagues suffering are shared as frequently as tall tales from the past.

On the top of many hearts this week at the annual reunion is the status of Princess Jasmine, who was to be a women’s honoree at Wednesday’s gala banquet. Instead of being in Las Vegas at the Gold Coast Hotel and Casino, she is in a Chicago ICU unit, in the final fight against pancreatic cancer.

One of her best friends from the wrestling business, Beverly Shade, is here. Shade was originally set to introduce Jasmine for the award, but instead will be accepting it on her behalf. Shade vows to still tell the audience that Jasmine was the stiffest female wrestler she ever worked with — in industry terms, a real “crowbar.”

Another name making the rounds is Billy Red Lyons. His brother-in-law Dick “The Destroyer” Beyer saw Lyons a few days before arriving in Vegas and has been sharing details of Lyons’ battle with multiple cancers, and has a cell phone photo for those who wish to see Lyons.

Others in the news include Winnipeg great Gordon Nelson, who has had a stroke and is now in a nursing home; Moose Morowski, who wanted to come to Vegas, but whose condition prevents him from sitting still for more than 30 minutes; and then there’s Verne Gagne, whose tragic accident in a Minneapolis nursing home, killing a fellow patient, made national news. His son Greg Gagne is having great difficulty finding another home that will take his father, who suffers from Alzheimer’s Disease, after all the publicity.

Yet it is not all somber here in Las Vegas.

There’s still the magic that happens when old colleagues see each other after so many years.

Former wrestling star, Kansas City promoter, and NWA President Bob Geigel was telling this reporter some tales of foes past when “The Million Dollar Man” Ted DiBiase and his wife Melanie approached the table, with DiBiase envelopping Geigel in a big bearhug from behind. 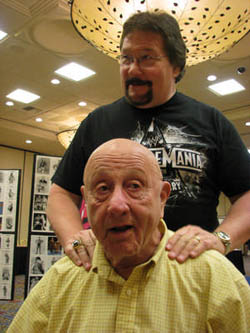 Geigel, who knew both of DiBiase’s wrestling parents — Mike DiBiase and Helen Hild — well, told of teaching Teddy to swim at the age of three in a hotel swimming pool. “I absolutely remember that,” swore DiBiase.

As DiBiase went to leave and visit some other friends, Geigel ordered him to sit down for one more story. “Yes, sir,” replied the former WWF star, eager to listen.

Then there was Luna Vachon, happily sitting beside her father Paul “The Butcher” Vachon and uncle Mad Dog Vachon. When she saw DiBiase, Luna gave him a big hug and said, “I’m still going to church!” to the wrestler turned preacher.

Leo Burke is at his first CAC reunion. “It’s my first one, as you know, so far so good. I guess things will get more exciting as we go along. It’s nice to see all the old faces that I haven’t seen in years. Everybody’s very respectful,” he told SLAM! Wrestling.

One of the surprises for Burke was Betty Niccoli, who he first met in Kansas City in 1967. “I didn’t feel so bad when she didn’t recognize me because I didn’t [recognize her] either!”