You don’t have to be a fan of Jeff Jarrett to appreciate what an impact he’s had on the professional wrestling industry in the past few years since founding TNA. That and more are covered in an excellent new DVD set Jeff Jarrett: King of the Mountain.

The new four-disc collection covers Jarrett’s entire life, both professional and personal, through a selection of Jeff’s most memorable matches and interviews with TNA Wrestling’s biggest names.

“Bloodthirsty” Bob Kapur and Matt Mackinder have reunited once again to tag team this review and as with their previous efforts, Bob’s comments are in normal font and Matt’s are italicized. 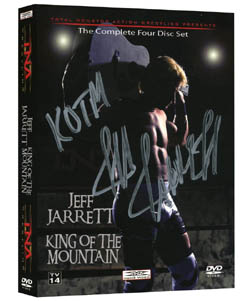 The format of the DVD is fairly straightforward, with a series of short interview segments interspersed with matches. The interviews feature Jeff and various other TNA personalities such as Terry Taylor, Dutch Mantel, Dixie Carter, and many of the company’s active roster. Jarrett touches on his childhood briefly and his family’s participation in the wrestling industry, before touching on his in-ring career. He discusses his time working for his father early on, and ultimately his move to WWE.

Uh-oh. He mentions WWE. These days, that signals lawsuit.

Hearing about his childhood was a nice touch, though I’m sure he could have gone more in-depth to make this a five-disc DVD set. In any event, starting with this segment, the viewer gets a feel as to how genuine and passionate Jarrett is about wrestling and, to a greater extent, life.

His first stint in WWE as the Double J country singer character was the first exposure many fans had to Jarrett, so this portion of the interview will be of great interest for them. It’s neat to hear tales from the Monday Night Wars from people who lived through them, and as someone who jumped back and forth between the companies a few times, Jarrett has a few tales to tell. Most famously, Jarrett reveals the truth around his controversial departure from WWE, where he was able to power-negotiate his payoff for wrestling a PPV match even though his contract had already expired.

For casual fans, this segment is somewhat eye-opening.

Naturally, Jarrett goes into great depth about the last seven years, since he founded TNA Wrestling. He provides his thoughts as to what has helped the company succeed when many others have failed, and credits a lot of people in addition to himself for that. He ends the interview segment by speculating on the future of TNA, and of his own wrestling career.

Throughout the interview, one really gets a glimpse of Jeff Jarrett, the man behind the persona. In opening up his heart in discussing the death of his friend Owen Hart, and the emotional ordeal he went through with the passing of his wife, Jill, Jarrett shows a side of himself that is not ever seen on TV. As a wrestler and wrestling promoter, it’s hard to not admire Jarrett’s accomplishments — but when he shows the side of him that’s a father, husband and a friend, it’s hard not to like him either.

I admit, this was a tad on the tear-jerking side, especially when Jarrett opens up about Jill. That said, it never gets old hearing anyone talk about Owen and seeing Jarrett do just that brought back May 1999 all over again. Wow — has it really been 10 years?

As good as the interview segments are — and they rank among the top of any TNA DVD — they aren’t the only reason to check out the DVD. It also features over 20 of Jeff’s TNA matches, which again might be more than on any other of the company’s releases.

The matches cover the entire history of TNA, including some that were shown on the company’s original weekly pay-per-views, and some from their time on Fox Sports Net. This older fare is most welcome and is a refreshing change from many of TNA’s spotlight releases which frequently only include matches from iMPACT on Spike TV and the company’s more recent PPVs.

Older matches include Jarrett against Scott Hall and Ron Killings from 2002 and a tag match where he was joined by legends Dusty Rhodes and the Road Warriors. It’s fun to revisit some of those classic TNA events and remember the times when special guests were brought in to surprise the crowd, such as Nikita Koloff and Sabu. Other matches from 2003 and 2004 feature former TNA stars like Monty Brown, Raven, X-Pac and Chris Harris. More recent battles are included as well and include many of TNA’s signature gimmicks like King of the Mountain and Lethal Lockdown.

I agree, Bob. Even his ladder match with Jeff Hardy from 2004 is a decent match, much like the one from a year earlier against Hacksaw Jim Duggan. Who knew Hacksaw was ever in TNA? I must admit, not I.

While many of the matches fall into the trap of overbooking with multiple ref bumps, run-ins, and guitar shots leading to a tainted Jarrett win, some of them in particular stand out.

My favourite match on the collection is Jarrett’s 2003 match against Raven for the NWA Heavyweight Championship. What I like about this one is that Jarrett wrestles a hardcore match, which is outside of his normal element. He really takes it to Raven in extreme fashion, including dropping a big elbow off the turnbuckle that drives Raven through a table. Another of the highlights is Jeff’s ladder match with Jeff Hardy from 2004. Again, this sees another side of Jarrett. Too much interference mars what could have been an outstanding contest, but it’s still a good watch. The last match on the set, Jarrett’s return to the ring after a two-year hiatus, to square off against Kurt Angle at Bound for Glory 2008, is another one to watch. While it wasn’t as good as the match they had a few months later at the 2009 Genesis PPV (not included on the set), it was a darn good performance from both men and proved that Jarrett could still hang with one of the best in the business today.

One thing I think all these matches portray is that Jarrett is a great in-ring worker with solid story-telling abilities and above-average athleticism. He can wrestle different styles and seems to have good chemistry with everyone he’s in the ring with. If you have a match with Jarrett, odds are it’ll be, at the very least, average.

If 20-plus matches weren’t enough, the bonus features are the proverbial icing on the cake. They include some of the earliest matches of Jeff’s career, including his first ever TV appearance (as a ref, working for his father). This archived footage helps show Jarrett’s evolution as a wrestler/sports entertainer. In TNA, there are few wrestlers with Jarrett’s longevity in the game whose footage isn’t owned by WWE, so to see this bit of history is an excellent capper on what already was a must-buy.

I love the bonus stuff. even more so that it’s from his days down in Texas. His first TV appearance is as a ref for a tag match in the old CWA I believe. His second-ever match (against Tony Falk) is also a bonus piece as it shows a scrawny kid who one day would ascend to the upper echelon of the business. A match with Jerry Lawler from 1988 is a match that I’m sure few have ever seen. But it’s here and it’s for the CWA championship.

Overall, King of the Mountain is definitely worth picking up. Even if you had Jarrett-fatigue (a common malady for those watching TNA for that period in 2005/2006 where it seemed as if the championship were permanently affixed on Jarrett), going back and watching the matches now allows you to revisit those matches with a fresh set of eyes. The interview is compelling (a minor complaint is that I would have liked the option to see it in one long-form segment, as opposed to them book-ending matches) and even non-TNA fans may like this part since it covers his time in WWE and WCW during the most recent glory era of the sport. And the bonus features are, well, a bonus on top of all that.

Yes, like Yogi Berra says in that Geico commercial: If you don’t have it, that’s why you need it.