WM25 indicative of a product at the crossroads 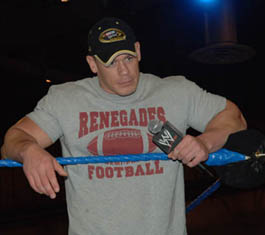 HOUSTON – With Houston getting set to host the 25th edition of WrestleMania this Sunday, it’s a pretty safe bet that no one outside the McMahon family would have envisioned back in 1985 that the event would still be around come 2009 — or that it would so perfectly symbolize both the long term growth and short term stagnation of the pro wrestling industry.

The first WrestleMania, was, after all, a bit of an experiment. Though it wasn’t the first wrestling pay-per-view, it was the first one to present itself as not just a big card, but an entertainment spectacle with its own unique identity.

To that end, we saw Mr. T team up with Hulk Hogan in the main event. Muhammad Ali was guest referee and Billy Martin the guest ring announcer. Cyndi Lauper was on hand at a time when she was a big name in the music biz, and Liberace strutted his stuff with the Rockettes.

As recently as 2008, the WWE enlisted outside help to sell the show. Snoop Dogg, John Legend and Kim Kardashian were all given a role of some sort, and one of the most heavily hyped matches involved the Big Show facing off against boxing champion Floyd Mayweather Jr.

It’s a bit strange, then, that for WrestleMania’s silver anniversary, there’s hardly a celebrity or athlete in sight. Recently rejuvenated actor Mickey Rourke might be there, and we found out just this week that Nicole Scherzinger of the Pussycat Dolls and Kid Rock would be on hand, but that hardly gave them enough time to helps sell the show.

And selling the show does need some help, at least if reports of thousands of unsold tickets are accurate. There’s also been a lot of buzz that the WWE is unhappy with the amount of press its showcase event has been receiving locally, and from the ground, it’s clear that WrestleMania hasn’t taken over the city the way it did Orlando last year — and that was a locale with much more competition for the entertainment dollar.

A cynical observer might suggest that the decision to rely less on outside personalities might not be completely the WWE’s decision, that celebrities might not see as much value in being attached to the event right now as in years past. Economics may play a part too, as those extra names cost money to bring in.

Regardless of the reason, the focus of the past few months of WWE programming has been on building up the main event feuds. There’s been some good (Randy Orton holding a grudge from his Evolution days) and some bad (squabbling for the attentions of Vickie Guerrero), with the bulk falling into the solid but not spectacular category.

Certainly nothing has measured up to the hype the last time WrestleMania was held in Houston eight years ago. The Rock and “Stone Cold” Steve Austin were still in their primes back then, and you couldn’t listen to the radio without hearing the Limp Bizkit song that the WWE drilled into fans’ heads as the soundtrack for their storyline.

Despite all that, there’s going to be a crowd at Reliant Field on Sunday at least three times the size of the one that filled Madison Square Garden for the debut edition of WrestleMania, and it will come in the middle of the sharpest economic downturn in decades. That alone says something about how far the business has come over the last 25 years.

Dial the time scale down a bit though, and the progress isn’t as impressive. That’s made apparent just by looking at the top matches on the card at WrestleMania 24 and comparing them to what’s about to be presented to us this weekend.

The final three bouts on the card at the Citrus Bowl were a triple threat match between Orton, John Cena and Triple H, the aforementioned Show-Mayweather showdown and a title match between Edge and the Undertaker. This time out, it’s Orton versus Triple H, Undertaker facing Shawn Michaels and Cena, Show and Edge in a three-way dance.

Notice anything familiar? Swap Mayweather out for Michaels and it’s the exact same cast of characters. The storylines may have changed, but the faces certainly have not.

The irony here is that the last time the WWE had real competition for the number one spot in the industry (sorry TNA) was during the late ’90s heyday of WCW. One of the largest criticisms leveled toward WCW at the time was its reliance on a familiar stable of top names, most of whom came from the WWE, and its inability to develop new stars of its own.

That’s not exactly the case with the WWE circa 2009, as just about everyone at the top of the card is a homegrown product. Cena and Orton are relatively recent creations, and the latter really seems to be hitting his stride at the current time.

But the fact remains that in a year’s time, which can sometimes be an eternity in wrestling terms, no one else climbed into the main event mix. Jeff Hardy and CM Punk appeared to have some support at times from the powers that be, but neither will be going for a title or appearing in the final three matches on this year’s show.

That lack of development has to be a bit worrisome, because the top stars won’t be around forever. Any WrestleMania could potentially be the last for Michaels or the Undertaker, and even the bedrock of the company, Triple H, has an injury history that doesn’t lend itself to longevity. The prospect of others being immediately ready to take over their roles looks pretty bleak.

And so even though the WWE isn’t presenting it that way, WrestleMania 25 isn’t just an anniversary show, but a bit of a crossroads event as well. It embodies perfectly the dizzying heights that pro wrestling achieved since 1985, as well as its current period of malaise and the business’ uncertain future.

It was almost exactly a year ago that I asked Linda McMahon what the company had planned for the 25th version of its biggest event since society attaches extra significance to that number. She didn’t give any details, which wasn’t that surprising given what can happen in wrestling in a year, but she said she felt sure it would be something special.

Now it seems like there’s a 50/50 chance for WrestleMania 25 to be just another pay-per-view card, or for the WWE to pull out all the stops and give all of us something truly memorable. That’s kind of fitting if you think about it.

We’ll find out Sunday which way it turns out.